Designer Gaetano Savini was a major force in the Peacock Revolution and head-to-toe dressing in men’s wear. 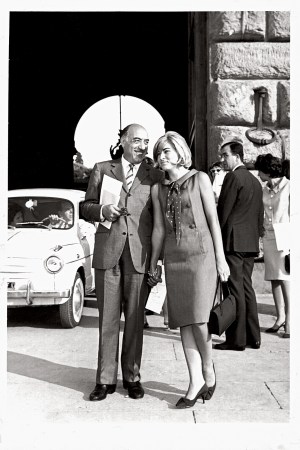 Now Gigliola Savini Perrone, who, with her husband Ettore Perrone ran the firm from 1987 to 2011, has written the preface to a new book about her father, “Gaetano Savini, the Man Who Was Brioni” (Assouline) by Fernando Morelli, Lea Della Cagna and Michelle Finamore. The book is filled with a multitude of photos from fashion shoots, ads, magazine or newspaper articles and family archives. Papa Savini, in fact, kept such complete records, including diaries, that his daughter said, “I think he wanted someone to do a book.”

This story first appeared in the September 23, 2015 issue of WWD. Subscribe Today.

Read an Excerpt From “Gaetano Savini, the Man Who Was Brioni” >>

Gaetano Savini founded the firm — which is owned by Gucci parent Kering — in 1945 with tailor Nazareno Fonticoli and financier Armando Colcani and soon began to introduce the innovations that made his name. “There were three partners in all, so it couldn’t be called Savini,” his daughter said, adding that Brioni was named for an island off Croatia that was once a glamorous Austrian resort. The designer felt that men’s wear had become sad and dull, and he was determined to introduce slimmer shapes with natural shoulders in bold colors and lighter materials, working with Italy’s top fabric firms — such as Loro Piana, Barbera and Mario Zegna — in order to do it.

Gaetano Savini is often credited with having anticipated or precipitated the Peacock Revolution. As current Brioni creative director Brendan Mullane regularly points out, Brioni men’s line was the first to appear on a runway as fashion in its own right, in a show that included men’s and women’s looks at Florence’s Pitti Palace in 1952.

As some reporters said, Gigliola noted, “He dressed his men like women and his women like men,” since he put women into man-tailored suits but used bright shades and ornamentation, including piping. He didn’t like cuffs on pants, “because he felt they were impractical; they caught dust from the street, and also cuffs shorten the men’s shapes.” Vests, however, were a favorite, and he made them in “white, aqua, navy blue, sometimes dark red,” she noted.

He was also very keen on hats, which he created in collaboration with Panizza as part of the “total look,” which he advocated, so that a man could be dressed from head to toe at Brioni, including suits, shirts, ties and shoes. Shirts came in bold colors and distinctive patterns, while shoes were as soft and comfortable as socks.

Gigliola recalled being in the Philippines 40 years ago and meeting someone who wanted to put the Brioni name on jeans; her father declined, because he didn’t want to lose control of his products through licensing, as they felt the Pierre Cardin firm had done.

“For 70 years, it was always the same beautiful quality,” she said. “In the last 10 years, we have done jeans, but we did the manufacturing ourselves.”