Mothers are in luck this season with a bounty of books for their big day that will charm and amuse and may even make them better informed. 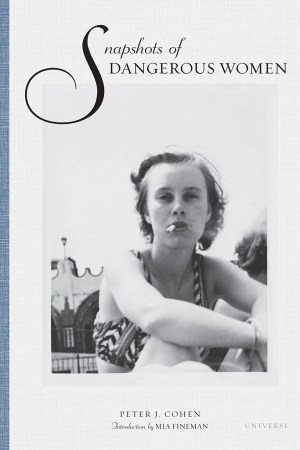 13 Movies to Watch in Theaters This Summer

Mothers are in luck this season with a bounty of books for their big day that will charm and amuse — and may even make them better informed.

“Snapshots of Dangerous Women” by Peter J. Cohen, with Melissa Catanese and an introduction by Mia Fineman (Universe).  Cohen visited flea markets and vintage stores and attended auctions to find old photos of women doing things that were regarded as unladylike at the time (drinking, dressing like men, smoking corncob pipes, boxing, riding motorcycles, playing with guns or bows and arrows). The result is an amusing group of images of these rebellious dames, captured for posterity in mischievous poses.  Two female aviators pose in front of a propeller plane, wearing goggles and caps clearly from the Twenties, while another woman pretends to spank her friend (she’s smoking a cigarette). Surprised in what seems to be a dormitory room, four gals are drinking and smoking in their pajamas, as, elsewhere, a woman wearing a hat leans out of the front of a jalopy, drinking from a liquor bottle.

“Obsessive Creative” by Collette Dinnigan (Harper Design). The fashion designer, who hails from South Africa and New Zealand, but made her name in Australia, where she is the country’s most famous designer, has dressed everyone from Nicole Kidman and Halle Berry to Catherine, Duchess of Cambridge and Princess Mary of Denmark. Her signatures are lace, lingerie-style dresses and feminine prints. There are lots of collages to illustrate her inspirations.

“Elvis and the Birth of Rock and Roll” deluxe edition by Alfred Wertheimer, Chris Murray and Robert Santelli (Taschen). In 1956, Wertheimer was given an assignment to photograph Elvis Presley. It was 1956, and Presley was 21. Little did the photographer know, this would turn out to be the job of a lifetime. For moms who love the King, this is a great book, one that includes photos taken by Wertheimer as Elvis was inducted into the army. Many of the pictures featured have never been published before.

“Donna Bell’s Bake Shop: Recipes and Stories of Family, Friends and Food” by Pauley Perrette, Darren Greenblatt and Matthew Sandusky with food and shop photographs by Ali Smith (Simon & Schuster). The bakery in Manhattan is named after Perrette’s late mother. It specializes in natural versions of Southern baked goods, and it started as a food truck. Now it has a store on 49th Street on the far West Side selling lemon squares, strawberry shortcake, many flavors of scone, pumpkin chocolate chip loaf, butter pecan cake with butter cream frosting, and so on. The book, of course, is filled with recipes for these treats.

“Battle Lines: A Graphic History of the Civil War” by Jonathan Fetter-Vorm and Ari Kelman (Hill and Wang). Drawing from letters, diaries, speeches, newspapers, maps and other historical records, Fetter-Vorm and Kelman have put together a surprisingly effective history of the war in graphic-novel form. The war is covered in its many aspects, including a passage on the notorious prison camp Andersonville, the grounds of Gettysburg, Pa. on the day after the battle, setting up a photograph on the battlefield, amputations in a field hospital, slaves leaving a plantation after the Emancipation Proclamation and the hungry populace on the home front in the South. Each chapter is anchored by its connection to a specific object.

“DudeFood: A Guy’s Guide to Cooking Kick-Ass Food” by Dan Churchill (Simon & Schuster Paperbacks). This book is right for the mother who wants to cater to her husband or son in the kitchen, or who likes the idea of cooking with her son, son-in-law or grandson. The recipes cover everything from a hummus dip to spaghetti bolognese to a beef roast.  There’s even a berry compote with caramel sauce and a chocolate soufflé meant to impress on date night.

“The Japanese House Reinvented” by Philip Jodidio (The Monacelli Press, out May 19).  Japanese design has long been a source of inspiration for people from other cultures, and now there is this book about 50 relatively new Japanese houses. There are projects here by three Pritzker Prize winners — Kazuyo Sejima, Shigeru Ban and Tadao Ando. There are plans, color pictures and an explanation of the ideas behind each house by the author, who has traveled widely in Japan.

“Saving Place: 50 Years of New York City Landmarks,” edited by Donald Albrecht and Andrew Dolkart and photographed by Iwan Baan and Seri Worden (The Monacelli Press). On the fiftieth anniversary of the New York City Landmarks Law, this book takes stock of what has been saved. Out of the ashes of McKim, Mead & White’s brilliant Penn Station, destroyed by cost-conscious railroad officials, preservationists were mobilized by the idea of saving the city’s architectural heritage. The result was this law, and there are now 31,000 historic buildings and other properties protected by it. From Jane Jacobs on, mothers and other women have played starring roles in the movement.

“H is for Hawk” by Helen Macdonald (Grove Press). When Macdonald’s father Alisdair Macdonald, a photojournalist, died suddenly from a heart attack, she coped with her grief in an unusual way. Macdonald, a Cambridge lecturer, poet and experienced falconer, decided to train a goshawk. Goshawks are large birds of prey renowned for their savagery and regarded as very difficult to train. The writer named hers Mabel, and got on with it. This book, which won the Samuel Johnson Prize and has been a bestseller in both England and the U.S., shows there is more than one way of nurturing another living creature — and oneself.