Longines made the most of the opportunity. 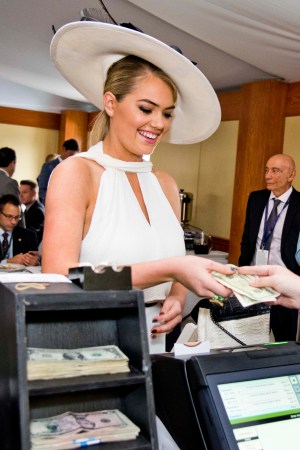 Official partner and timekeeper Longines made the most of the opportunity. The Swiss watchmaker ponied up $3 million and $2 million, respectively, for the Longines Breeders’ Cup Turf and Longines Breeders’ Cup Distaff races. From horse owners to stable staff, teams for each winner, as well as American Pharoah’s, received its Conquest Classic watches. (Judging from the 175 private jets parked at Blue Grass Airport just beyond the track and visible from the event’s inaugural luxury chalets, it might not be alone for long as other fashion and jewelry brands move in, as happened at Art Basel Miami Beach.)

Event ambassador Kate Upton said the combination of the Breeders’ Cup and Keeneland held a special place because it’s about more than money. It’s about the horses and the experience.”

Upton shivered in her halter maxidress by Jason Wu. “I’m freezing but impressed that everyone’s pulling it off in their chic coats and hats.”

On deck to present the trophy to American Pharoah’s owner, she channeled Cecil Beaton in black-and-white, Ascot-inspired attire crowned with a hatinator, a hybrid of a hat and fascinator co-coined by its designer and Breeders’ Cup official milliner Christine Moore.

“It sits like a fascinator but frames the face like a hat,” said Moore of the wide-brimmed style in wool velour felt trimmed with silk, glass beads and a thinned ostrich feather. “Headwear has become the rage not only because of the royal wedding but as a reaction to the casual trend. It’s a case of extreme opposites.”

Unlike the Kentucky Derby’s parade of voluminous hats, fascinators and fedoras flew with the fillies at the Breeders’ Cup. If they didn’t pick one up at Moore’s on-site trunk show, women wore fascinators from Arturo Rios, Headcandy and rental services like Newmarket Hat Hire and Rent the Races. Being Halloween, there were a lot of witch hats, too.

Men shopped for Breeders’ Cup custom ties and pocket squares in English woven silk at a Keeneland pop-up for Stuart Mercer, a Lexington-based menswear retailer. Their écorché horse-and-fence motifs link to the trophy and region.

“These accessories are long-term, quality pieces rather than just the clubby memorabilia that you often see,” said Mercer.

He outfitted clients in plaids and tailored layers, while local women’s boutique Carl Meyers must have called in every cashmere wrap in the country for the occasion. Since Theory chief executive officer Andrew Rosen is a regular on the thoroughbred circuit, his company’s track team modeled custom equestrian looks for purchase at the races for the partnership’s second year.

The escalation of parties and private events added to the Basel comparisons. Bobby Flay, whose horse competed, hosted Taste of the World at Breeders’ Cup in a state-of-the-art yet chilly stable at the sprawling WinStar Farm outside the city. Marcus Samuelsson posed with his pork belly sliders for nonstop selfie requests as 1,500 guests warmed themselves with bourbon before Tim McGraw took the stage.

“For its first time, Keeneland did an exceptional job,” said Banke, who serves on the board of directors for the venue and Breeders’ Cup. “It will definitely return.”

But American Pharoah won’t. He’ll be down the street from his birthplace here siring the next hopefuls.