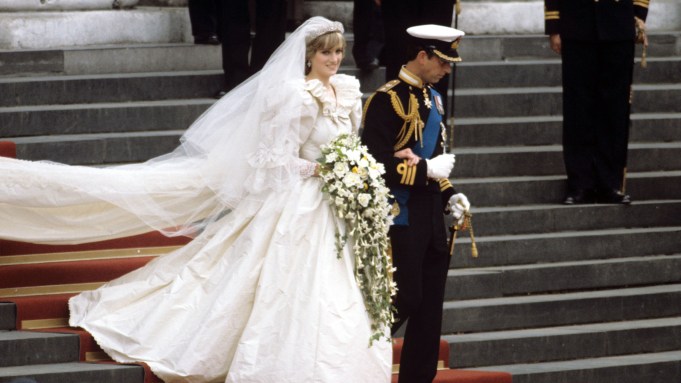 When Meghan Markle glides down the aisle of St. George’s Chapel at Windsor Castle on Saturday, she’ll join a bevy of brides whose choice of dress on the day will become a part of British history. In 1840, Queen Victoria’s white lace-and-silk gown set the trend for brides everywhere, while Kate Middleton’s gown, designed by Sarah Burton of Alexander McQueen, went on display at Buckingham Palace in 2011, raising millions for charity.

The royal bridal dresses, for centuries immortalized in oil paintings or photographs, have become part of the country’s cultural heritage, and inspiration for brides around the world. Here, WWD looks at the impact that Queen Victoria had on 19th, 20th and 21st Century British bridal wear.

It was Queen Victoria who started the popular tradition of brides wearing white to their weddings, according to Eleri Lynn, dress curator at Historic Royal Palaces.

“Prior to Queen Victoria’s wedding to Prince Albert in 1840, royal brides had worn colorful fabrics and brocades,” she said. “However, there hadn’t been a wedding of a Queen for many centuries — not since Queen Mary I in Tudor times — so this was something quite different to the usual royal wedding. Many people expected Queen Victoria to wear ceremonial robes, and perhaps even her crown. In the event, Victoria wore a white court dress of Spitalfields silk woven in London, decorated with English Honiton lace, and worn with sprigs of orange blossom flowers in her hair, instead of a crown or tiara.”

Lynn said that one theory is that Queen Victoria had deliberately wanted to avoid the regalia of Queenship, and to present herself as a modest bride.

“The orange blossom has many symbolic meanings — from chastity to fertility,” said Lynn. “But it had a romantic meaning for Victoria, as a brooch of porcelain, while a gold orange blossom was Albert’s first gift to her after their engagement. Aristocratic brides soon followed suit and adopted white as the fashionable wedding color. It has remained the main color for wedding dresses ever since.” Lynn added that it actually took until after the Second World War for middle class brides to adopt the white as it was so impractical — and couldn’t be worn again.

“She also established the tradition of promoting British craft through the wedding dress,” said Lynn. “The Duchess of Cambridge’s dress was made from British fabrics and worked on by the Royal School of Needlework at Hampton Court Palace. But the royal wedding dress reflects the personality of the bride and the fashions of the time. For example, Queen Elizabeth II’s wedding dress (by Norman Hartnell) reflected the boxy shoulders and cinched waist of the Forties and Princess Diana’s (by David and Elizabeth Emanuel) epitomized the fashions of the new romantic early Eighties.”

Royal brides also have other considerations, that the average bride may not be thinking about, added Lynn, “such as the heavy weight of a tiara or worrying about your skirt getting creased in a state horse-drawn carriage.”

GALLERY: Royal Wedding Dresses: A Look Back at Some of the Most Iconic Bridal Gowns in History >>

Meghan Markle: What Will She Wear?

A Numbers Game: Britain’s Royal Brand Is a Cash Machine