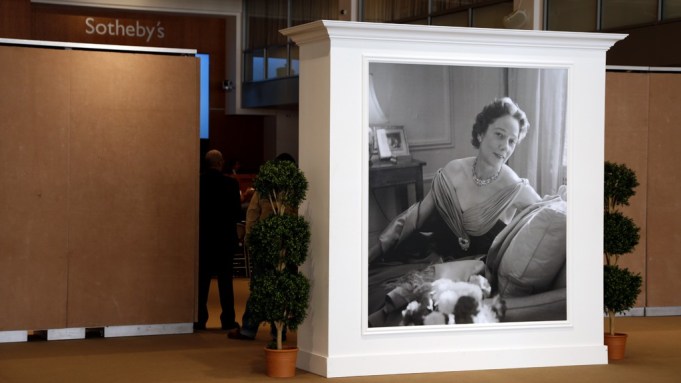 At some point while Brooke Astor was decorating her legendary 778 Park Avenue duplex in the Sixties, long after her husband Vincent had died, her decorators presented her with a 19th-century British painting of black whippets. As Meryl Gordon recounts in “Mrs. Astor Regrets,” the philanthropist and socialite was so charmed by the gift, collecting dog paintings became a hobby, one that eventually inspired a fad for dog paintings in New York high society.

So it was that among the more than 900 items from her estate to go up for sale Monday at Sotheby’s New York, about 73 of them were paintings of impossibly cute, pampered pups — Pekingese, spaniels, poodles, you name it, enough to make a killer Buzzfeed listicle. The auction continues today.

The rest of the Bible-thick catalogue, with items from Astor’s Park Avenue apartment and Holly Hill, her Westchester County estate, reflects her upbringing and tastes. For instance, her childhood in Asia — there were several pieces of Chinese lacquer furniture and fine Asian porcelain — and her love affair with jewelry — an emerald and diamond necklace was estimated at $250,000.

While the pieces may have held some personal value to Astor, who died in 2007, they were not the stuff that makes for landmark auctions. Sotheby’s has a low estimate of $6.6 million for the two-day sale.

Still, provenance trumps preciousness any day and by the end of the first session Monday, the auction had already sold $6.7 million, a spokesman said. Part of the proceeds will go to Astor’s preferred charities, like the New York Public Library.

Through five years of litigation between Astor’s son, Anthony Marshall, and her friends and charities over Astor’s estimated $100 million estate, all splashed over the city’s tabloids, the Astor name seems to have lost none of its luster.

Louise Grunwald, a longtime Astor friend, said many of the items at the auction would sell well above the estimate just because of who Astor was.

“There were many little old ladies walking around the exhibition because it’s Brooke Astor,” Grunwald said. “She was a hero to New Yorkers.”

On Monday morning, hundreds quietly filed into Sotheby’s seventh-floor American Art gallery to bid on some small piece of the legacy.

There were some moments of genuine surprise — a pair of Japanese jars were estimated at $15,000, but a telephone bidder and an older gentleman at the auction escalated the price so much that when the man on the floor bid $140,000, Maarten ten Holder, who led the auction, said, “Do put your glasses on. Just to make sure.” They eventually sold to the telephone bidder for $170,500.

Grunwald did not come to the auction. She strolled the exhibit Thursday and remembered many of the pieces. “It was sad, to tell you the truth,” she said. “I remembered the happy times I spent among many of those things, sitting on those things.”

She decided she didn’t want to bid on anything.