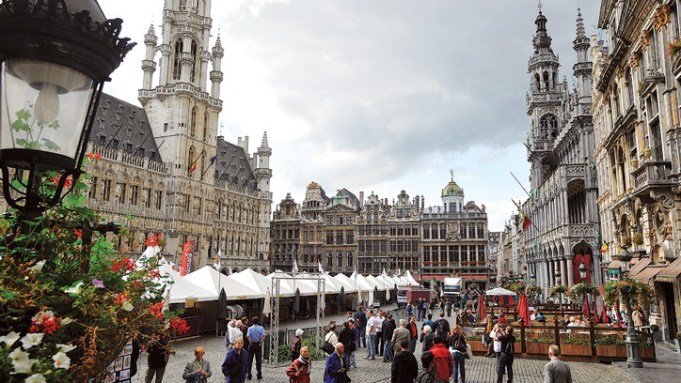 It is not meant as a slight. In fact, the diminutive figure is an apt symbol for the capital of Belgium and the European Union, for it is not an obvious or showy place. But Brussels is certainly quirky, charming and international—a magnet for creative types and adventurous tourists who value eclecticism.

Contrasts abound, from the staggering Baroque architecture of The Grand Place to the looks-like-it-just-landed-from-Mars Atomium, a kitsch structure resembling an iron molecule built for the 1958 World’s Fair that glints from the outskirts. There’s a warren of charming cobblestone streets to explore in the town center, and dense, verdant parkland ringing the suburbs.

“It’s a dramatic city in terms of urbanism. You have the best and the worst at the same time,” notes Nina Ricci designer Olivier Theyskens, a Brussels native who attended the city’s famous fashion school, La Cambre. “When I was a child, it was really trash. Recently, it’s been a little cleaned up.”

“It’s quite a dull place when you look at it at first,” concurs fashion designer Jean-Paul Knott, another of the city’s sons, alluding to the often-leaden skies and a hodgepodge of sublime and horrible architecture from every era, thanks to the sprawl of European government buildings. “But it’s quite calm,” he adds. “People are very nice. Somehow I feel at home.”

To be sure, the city’s multicultural mix, vibrant cultural scene and stylish shops and restaurants keep things interesting. Brussels is home to some of Europe’s most acclaimed contemporary dance and theater productions, along with budding film and contemporary art scenes. Last year, the Wiels art center opened its doors in a striking industrialist building from the Thirties, and now a stream of well-known international galleries and artists is arriving. Residents and newcomers alike are attracted to the low rents, affordable living—where else in Western Europe can you get change for a 2 euro coin when you order a beer in a trendy cafe?—and a deep history of art collecting. It also doesn’t hurt that most of Western Europe— including Paris, London and Cologne, Germany—is a quick train ride away.

“The most attractive part about Brussels is the quality of life due to the amount of green forest that surrounds the entire city,” notes designer Stephen Fairchild, who commutes to Amsterdam as creative director of Mexx, but has called Brussels home for the last eight years. “The quality of real estate for value is extraordinary. The outsides of buildings are not attractive, but the insides are spectacular. Once you get to know the ins and outs of Brussels, it’s a very hip city.”

Fairchild also lauds the international mix in Brussels, where it is estimated that up to a quarter of the one million inhabitants are foreigners. While French is the official language, a visitor is just as likely to hear Dutch, English or Arabic in the streets—and perhaps some lively debate about ongoing tensions between the Flemish and French communities. While the politics are complicated, the multicultural muddle that is Brussels adds to the city’s dynamism and creative edge.

Belgians have a renowned flair for fashion, and are upping the ante when it comes to home and industrial design, as well. For example, Baden Baden, a boutique devoted to kitchens and bathrooms, is a labyrinth of tasty decor possibilities, all in subtle tones of gray and brown. And a stroll down Rue Haut will reveal a wealth of great antique shops…and Easy Tempo for pizza and antipasti when you need a shopping break.

Theyskens laments that he doesn’t get back to Brussels much, but he always makes a point of dining at La Meilleure Jeunesse, a cozy, bordellolike bistro with its rickety, mismatched furniture, artsy photos and laid-back atmosphere that also permeates and defines the city.

WHERE TO EAT AND DRINK
It’s hard to trump the impeccable service and peerless seafood at L’Ecailler du Palais Royal, a chic, old-worldy standby on the Place du Grand Sablon. Be sure and start with a bowl of handmade lobster raviolis resting in a pool of curry-perfumed cream. Canterbury is another trusted standby of the local elite, with a leafy terrace, an art-stuffed dining room and a menu of reassuring classics for the luncheon set.

Brussels is famous for its atmospheric brasseries, and La Quincaillerie, set up in a spectacular old hardware store in Art Nouveau style, buzzes every night with guests who surely break their vow to sample only a handful of frites. Belga Queen, a sprawling brasserie in a spectacular 18th-century building that once housed a bank and a post office, serves up Belgian cuisine in a funky, high-design setting—complete with wacky unisex restrooms. As for beer—along with mussels, almost synonymous with Belgium—it’s almost impossible to find a bad or overpriced draft in Brussels. The Walvis and Belga cafes, with rotating fans on ceilings and young, trendy crowds underneath, are worth a visit, the latter situated in a ravishing radio station building from the Thirties. For a traditional pub experience, with rows of wooden tables and nicotinestained walls, try A la Mort Subite, or Sudden Death, and see how many Gueuze beers you  can manage.

WHERE TO SHOP
Stijl, a landmark shop on trendy Rue Antoine Dansaert, is a mecca for the crème  de la crème of Belgian fashions, with mostly black, quietly alluring ensembles by Dries Van Noten, Ann Demeulemeester, Veronique Branquinho and others hung in artful rows in an industrial setting. The first European outpost for Martin Margiela and boutiques such as Own and Natan 13 are all nearby and play up fashion’s dark, brooding side. Tucked away in a picturesque square is a men’s outpost for local designer Christophe Coppens, proffering quirky accessories such as twotoned fedoras and a sequined brooch in the guise of a bloody kitchen  knife.

But the city’s fashion can come out sunny-side up, too. The L’Essentiel boutique on Rue Louise is a perfect example with a riotous decor of vivid colors and retro patterns, and fetching, affordable fashions in the vein of Marni. Bellerose—which Fairchild describes as a Belgian take on Abercrombie & Fitch—has a dim, hunting lodge decor and a selection of cozy sweaters, striped scarves and plaid shirts, which are as reassuringly familiar as they are slyly cool. Brussels has a bounty of boutiques in the contemporary vein stocked with lively mixes of local and international brands such as Privejoke. Most international luxury brands can be found, but the one to check out is Delvaux, a Belgian purveyor of sumptuous leather goods that is older than Hermès and almost as expensive. Stump your friends with a discreet Seventies vintage shoulder bag in gunmetal gray leather, or something with the signature “D” logo.

And when you’ve had your fill of shopping, be sure to save room for dessert. Chocolates are a must, and Pierre Marcolini, whose boutique resembles a couture  salon, is the go-to for delectable ganaches wrapped in chic, all-black packaging. For spectacular cookies and ice cream, make a beeline for Dandoy—the shop is redolent of butter and spices.

WHERE TO STAY
Steps away from The Grand Place, the Hotel Amigo offers classic luxury, with René Magritte images in all the rooms and Tintin cartoons and figurines in each bathroom. Wake up hungry, as the copious breakfast buffet is accompanied by your choice of egg dishes, along with pancakes and waffles as a finale.

The Domenican, tucked behind the opera house, recently opened and is touted as the first design hotel in Brussels—albeit one with a 15th-century flair. The building was formerly an abbey (which explains the piped-in chanting in the elevators, the dim lighting and cloisters incorporated into the design). Later it was home to the French painter Jacques-Louis David.