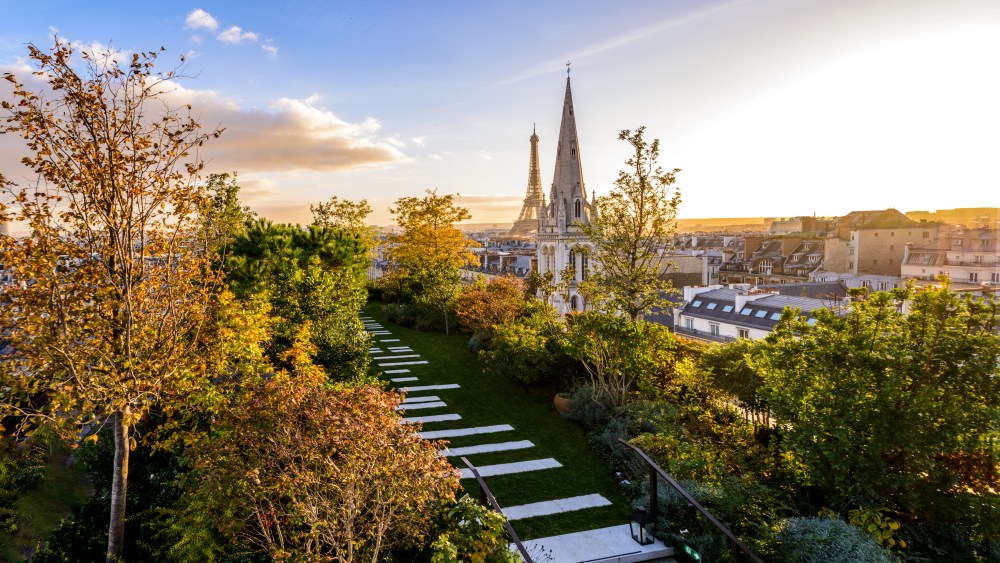 Roman jeweler Bulgari is preparing to bring a touch of Italian hospitality to Paris with the opening on Dec. 2 of its seventh hotel worldwide, located in the city’s Golden Triangle just a two-minute walk from the tony Avenue Montaigne, where parent company LVMH Moët Hennessy Louis Vuitton has its headquarters.

Entirely redesigned by Italian-based architecture firm Antonio Citterio Patricia Viel, which has worked on all of Bulgari’s hotels, the former 1970s-era office building has been transformed into an 11-story luxury establishment with just 76 rooms and suites.

With prices from 1,400 euros for a 450-square-foot room to 35,000 euros for the two-story penthouse, which comes with a roof garden with a view of the Eiffel Tower, the Bulgari hotel sits squarely at the top of the luxury pyramid in Paris, alongside its stablemate, the recently opened Cheval Blanc on the River Seine.

“We’re very excited because this is probably the most challenging, the most crowded and expensive city in the world when it comes to top hospitality,” Jean-Christophe Babin, chief executive officer of Bulgari, told WWD. “For us, it will be really the ultimate proof of desirability of our brand and concept.”

The hotel will include a 2,365-square-foot boutique, replacing the former Bulgari flagship on Avenue Georges V, and complements the brand’s store on the nearby Avenue des Champs-Élysées, opened in 2018. Bulgari earlier this year unveiled a refurbished store on Place Vendôme, the epicenter of high jewelry worldwide.

“As a jeweler, and being masters of hospitality, Paris eventually is the single most important city for us, even though we come from Italy. So bringing the Roman hospitality and the Roman jewelry to Paris is, businesswise, obviously a must-do, as Paris will forever retain that status of capital of jewelry,” Babin remarked.

Situated on the corner of Avenue George V and Rue Pierre Charron, the hotel is a stone’s throw from the Four Seasons Hotel George V, where Sylvain Ercoli, the managing director of the Bulgari Hotel Paris, previously worked.

As such, he is uniquely placed to know what makes the newcomer different to the French capital’s existing “palaces,” the official rating for hotels that exceed the five-star standard.

“I think it brings a touch of Italian elegance which, to me, is absolutely timeless,” he said on a recent tour of the premises. “It’s Italian, bourgeois luxury, but which has somehow espoused Paris.”

He pointed to the decor of a 20,000-euro-a-night suite, lined in glossy eucalyptus wood panels, its dining area clad in straw marquetry from the workshop of acclaimed master Lison de Caunes. Dotted throughout were design objects and furniture from the likes of Gio Ponti, Flexform, Fontana Arte and B&B Italia.

Viel described it as a cross between Roman glamour and Parisian sophistication.

“Somehow Rome and Paris are the two faces of a same ambition, if you like. They are the center of modern creativity. Fashion is both Roman and Parisian; food is both. So they are somehow embodying the same position worldwide, but from two very different points of view,” the architect said.

The hotel shares a number of codes with Bulgari’s jewelry universe, including a warm color palette that ranges from garnet and amethyst to its signature saffron shade. In the entrance, a painting of actress Monica Vitti by Chinese artist Yan Pei-Ming overlooks a marble floor inlaid with a star motif, similar to the one found in Bulgari’s store on Via Condotti in Rome.

The 14,000-square-foot spa includes a semi-Olympic swimming pool covered in mosaics in tones of emerald, jade and malachite. The vitality pool, meanwhile, is decorated with a motif inspired by the Baths of Caracalla in Rome, a major inspiration for the Divas’ Dream jewelry collection.

Featuring nine treatment rooms and a circular spa suite including a private hammam, the wellness area works with beauty brands Amala, Bellefontaine, Ananné and Augustinus Bader, and is the only location offering 111Skin’s clinic treatments in France.

The Il Ristorante eatery is run by Michelin-starred chef Niko Romito. It has 58 seats indoors and 40 outdoors in an inner garden, and offers dishes including his signature vegetable lasagna, and a Milanese-style risotto made without butter. French classics like sole meunière and onion soup are on the room service menu.

Babin said the amenities were exceptional for a boutique hotel, and justified the high average daily rate of the rooms.

“This business model works only if the experience is so exceptional that you accept to pay an ADR which is much, much higher than the other palaces, because otherwise you wouldn’t have the critical mass to absorb the cost of proposing better services and infrastructure — the pool for example, or the spa — than most of the existing palaces,” he said.

He noted that Bulgari, which has hotels in Milan, Bali, London, Beijing, Dubai and Shanghai, is usually the number one in every city in terms of revenue per available room. It also scores near the top of the rankings drawn up by benchmarking service Leading Quality Assurance.

“We want, obviously, to become the number one in Paris, which is not easy, because Paris is the most competitive city in the world when it comes to measuring that,” he said, noting the city counts more than 10 hotels with an ADR above 1,000 euros.

It’s an ambitious target, at a time when the city is still struggling to recover its pre-pandemic tourism levels. Ercoli said French people traditionally account for just 3 percent to 5 percent of clients at luxury hotels in Paris, while U.S. citizens represent 35 percent to 40 percent of the customer base.

While American, European and Middle Eastern travelers are trickling back to the French capital, Russian, South American and Chinese nationals are still homebound by COVID-19 travel restrictions. However, city officials are betting on a massive influx of visitors for the 2024 Summer Olympics.

In the race to attract VIP clients, Babin expects to go head-to-head with Cheval Blanc, an internal competition apparently sanctioned by LVMH chief Bernard Arnault. “For sure it’s the group’s ambition that those two hotels become the two new references in ultimate luxury experience in the City of Light,” Babin said.

The executive noted that both were relative newcomers to the hospitality segment. Bulgari opened its first hotel in 2004, and Cheval Blanc’s hotel division was founded in 2006. “Cheval Blanc is primarily the best wine in the world, and we are primarily one of the best high jewelers in the world, so two activities which I would say are a bit far away,” he said.

“On the other hand, our clienteling obsession has helped us to build the business models which insofar have proven very successful in creating, de facto, a style of hotel which I would qualify not only as a 21st-century palace, but the ultimate experience through a boutique hotel format,” he argued.

Up next for Bulgari’s hotel division are openings in Rome and Moscow next year, Tokyo in 2023, Miami in 2024 and Los Angeles in 2025. It’s also hunting for a location in New York City, Babin said.

“The master plan is to have New York, L.A. and Miami. I think that if you’re really to establish a strong presence in the U.S., those three cities are absolutely mandatory, and I think in all those three cities, our concept remains unique, so we have not necessarily the stress to be there as soon as possible,” he commented.

As the only Italian player in the French capital’s hospitality industry, Bulgari plays to its cultural strengths. “Our style is very different from any existing players in Paris,” Babin said. “We come from a highly cultured historical background and environment. On the other hand, we are Latins, so we are warm, we are cheerful, we have love and empathy.”

That approach plays well to its guests, who he described as successful, independent types seeking a home away from home, and has resulted in a high rate of returning clients elsewhere.

“Today’s clients are much less formal than they used to be more than one century ago, when those [other Paris] palaces were constructed. And they really do appreciate to be in a practical, contemporary, modern environment with a staff which is extremely client-obsessed, but at the same time approachable and friendly,” Babin said.

“When I see the evolution of hard luxury, it looks like it’s a trend right now. Typically, high jewelry is more and more worn dressed up, and dressed down, meaning that people are enjoying their luxury not just for different formal opportunities, but also informal opportunities, and our hotel concept is really following those lines,” he concluded.