The modern American restaurant aims to be an unpretentious and welcoming haunt, riffing on iconic restaurants from other cities.

American Bar, located up the street from Cafe Clover and Clover Grocery in the West Village, is not a health-centric restaurant. But many of the same ingredients that have made Cafe Clover a success — intentional design with fashion-world appeal, a focus on quality sourcing — have transferred over to the team’s take on American Continental cuisine.

The restaurant officially opened its doors this week after hosting several New York Fashion Week events, including Prabal Gurung’s after party and a cocktail for LoveShackFancy and Aerin’s collaboration.

Kyle Hotchkiss Carone — who opened his last restaurant, The Well, in December — along with coowners David Rabin and Jeff Kadish, were approached by the Greenwich Avenue location’s owner about creating a new concept for the space. While they’ve put a definitive stamp on the health-conscious dining genre, the trio decided to take a different turn for their next project, reflecting on what they thought was missing from downtown New York. Carone began thinking about the places he frequents when he’s not eating Cafe Clover-style.

“I’m going to places like Polo Bar, or in L.A. I’m going to Tower Bar,” he says. “And there wasn’t really that downtown. You find it in Midtown, and you find it at old-school places like the 21 Club or Michael’s, all these places in the 40s and 50s. So essentially I thought, OK, I can open up another restaurant. It just has to be a little bit different. Try to keep myself on my toes.”

The concept they landed on is American continental cuisine: food that’s simple, delicious and familiar.

Clover’s executive chef Carolina Santos-Neves is also heading up the kitchen at American Bar, splitting her time between the two restaurants. American Bar offered the chef an opportunity to explore a new direction of cuisine, putting her own spin on traditional dishes. There are elements of the Cafe Clover mentality in the menu: classic, decadent dishes like the spinach artichoke dip trade ricotta and parmesan in place of sour cream; fried calamari uses rice flour, transforming it into a gluten-free dish. She’s also a fan of herissa, which appears in several dishes including the salmon. 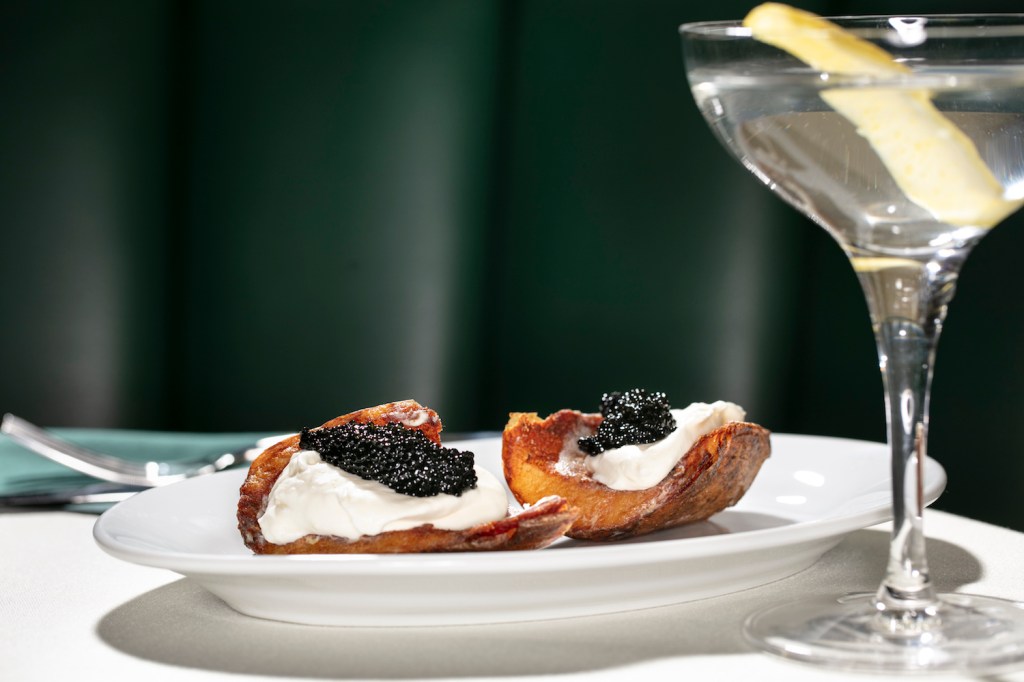 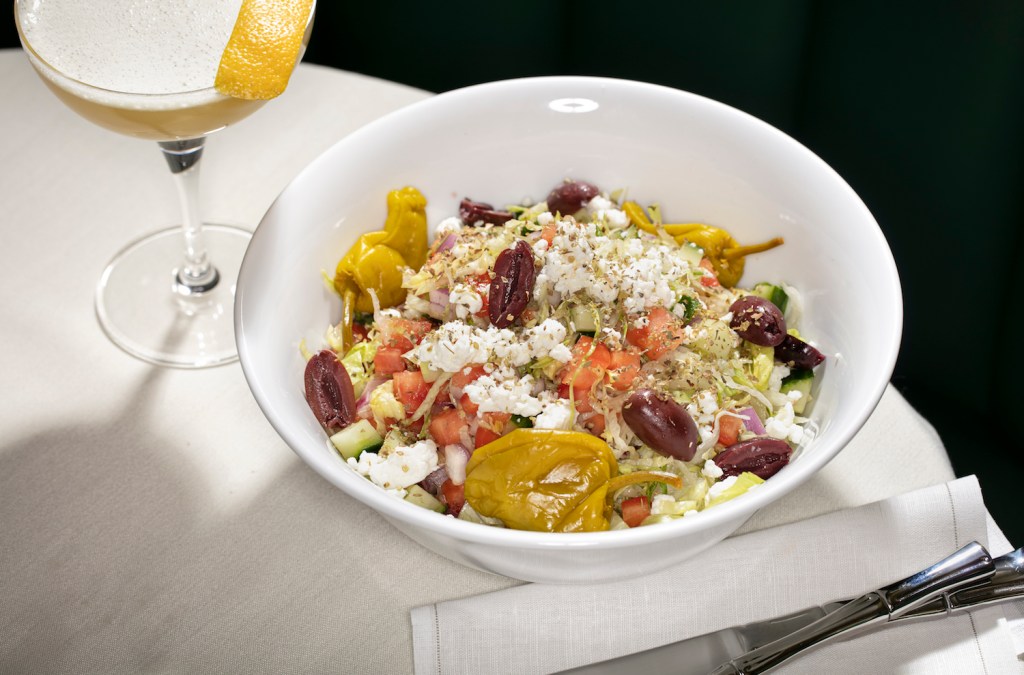 “I love butter, but I always think there’s a place for butter and I don’t think it has to be in everything,” she says, adding that sourcing high-quality ingredients has been a focus. “For me, it’s all about balance. I think that there’s a redefinition of what healthy means. I think it’s really about being present and indulging in a way that you’re not going to feel bad. You may have a chicken schnitzel, but it’s made with a date mustard and the sweet potatoes are not super heavy. So I think you enjoy it, and it’s not about deprivation.”

While the menu isn’t inherently gluten-free or vegan, their other restaurant experience means that they created the menu with dietary limitations in mind. “The through line that we’ve been talking about is being able to eat in an indulgent way and really enjoying your food, and enjoying things that maybe you have restricted in the past or you’ve been mindful of using,” says Carone. “But we’re using the best of those ingredients.”

The restaurant also taps into a sense of nostalgia with its Tower Bar Ice Cream Sundae menu, an homage to the sundaes served at Sunset Tower in L.A.

American Bar also addresses a common issue with downtown dining: where to go if you just want to have a drink.

American Bar’s answer is a dedicated section for drinks, with banquettes and small tables, that guests will be able to reserve ahead of time. The restaurant also has a traditional bar with seating, and a side section of the dining room that with a curtain can convert into a semi-private dining area. In warmer months, the windows facing the street will open onto the sidewalk, lending an outdoor dining feel.

The design of the space was inspired by English members clubs, with a splash of old-school Midtown haunts. Guests are greeted by mini citrus plants once they walk inside, and vintage exhibition posters from Leo Castelli, Mary Boone and Tony Shafrazi line the sunny Soane yellow walls. The main dining room tables have white tablecloths, but the vibe isn’t overly formal; chairs are wicker and bamboo. The dark green banquettes hark back to the club inspiration, but without the pretension that implies.

“Everyone’s welcome here. We just want it to have this feeling of when you walk in the door, you become a member of this thing,” says Carone. It’s a neighborhood spot, when your neighborhood is the West Village. “I want you to come in and get a drink, and then move over to your table, and run into your friend who lives in the coop on lower Fifth that you also live in. It’s a friendly, fun, unpretentious place that we want to welcome you into.” 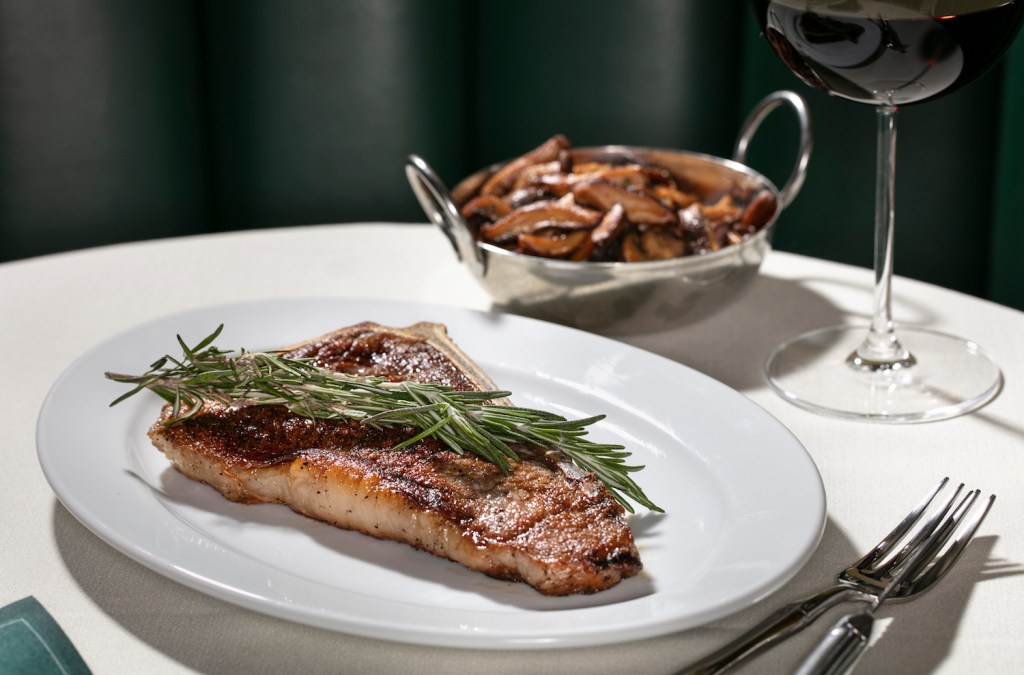 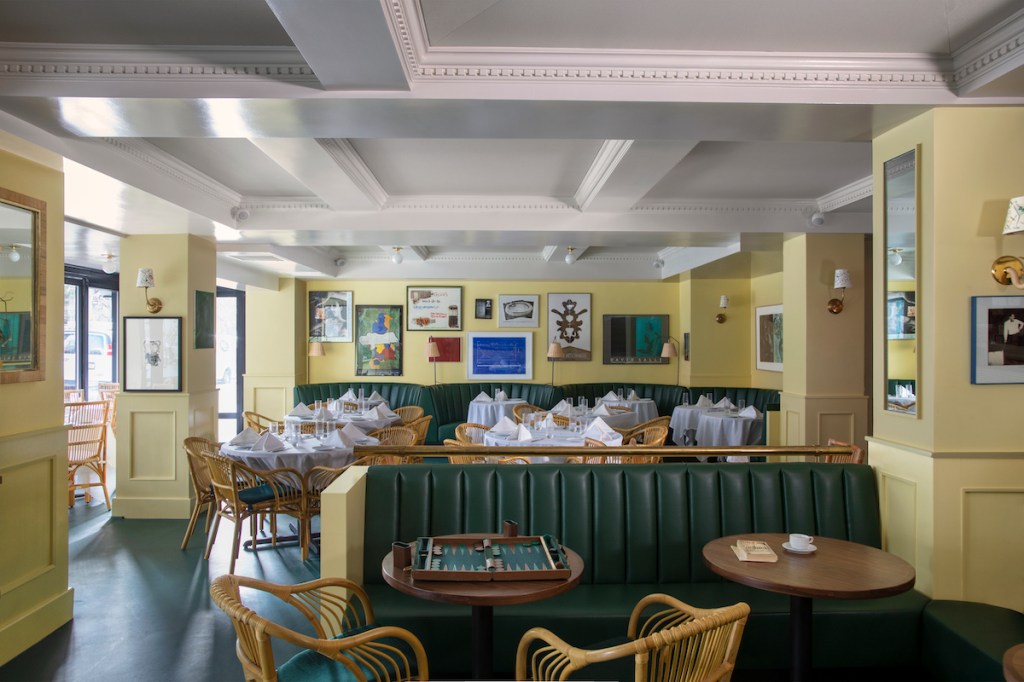