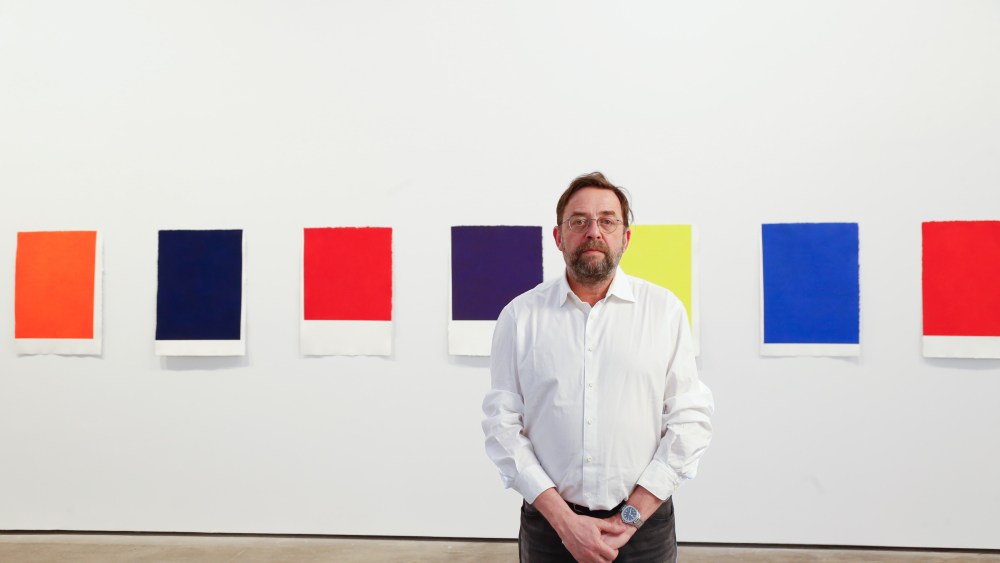 Callum Innes’ latest work is not what meets the eye — at least at first glance.

The abstract painter has mounted “With Curve,” a solo show of his work at Sean Kelly Gallery in Manhattan. It’s his first exhibition in New York since 2013. “All spaces are different. This is quite a hard space to solve,” says the artist, peering from behind his wiry glasses in the airy gallery’s main room — which is obscured by large white pillars — the morning before the show’s opening reception.

Divvied among the gallery’s three rooms, the artist’s work speaks to the transformative quality of space. The focal point of the show is a series of large, single-colored gouache canvases hanging in a row within the main gallery; however, this isn’t as straightforward as it sounds. “A lot of my work, which appears to be minimal and very simple, is actually quite complex,” the Scottish artist explains. “The important thing about my work: it should always retain a human fragility. It should always be slightly wrong.”

That “wrong” quality is achieved through subtle distortions — what appears to be perfectly square canvases are, in fact, slightly convex on the sides. “All of my work is about things being off kilter slightly,” Innes continues. “It’s just a slightly uneasy feeling about space, so from something very simple, it becomes quite active.”

The series is a continuation of wall paintings he showed at the De Pont Museum in Tillburg, Holland, late last year. For “With Curve,” Innes has transformed the concept to be more structural — the canvases create depth, and shadows project down onto the white wall. A related exploration of pastel drawings hangs on the wall opposite the paintings.

His new canvases are painted with strong, bright colors, a departure from the other paintings in the show. “I live in a miserable dark, damp place called Edinburgh; it’s quite nice to have a bit of color,” Innes says of the newer works. In the intimate downstairs gallery space, three of his “Exposed” paintings — which he is perhaps best-known for — hang in relation to each other, driven by violet and blue tones divided into quadrants on the canvas.

“They deal with space in a very different way than the panels upstairs deal with space,” Innes says of this exploration. In these paintings, he applies turpentine to sections of painted canvas before it dries, stripping layers of the paint away. “I think color can do many things. White expands into the space,” he continues, gesturing to the unpainted portions of the canvases. “If the ‘Exposed’ paintings are working, often people ask me, ‘How did you paint the white at the bottom?’ which I haven’t painted. Where is the space? Are you stepping into the space, or is the space the background? The white section becomes an active section of the painting.”

Innes characterizes his work as investigations into physicality, landscape and light. His “Exposed” paintings reference human gesture, which he calls attention to by demonstrating his starting brushstroke on one of the works, a lateral swipe from the center of the painting towards the right outer edge. “It’s about the physicality of a painting,” he reiterates. “It’s all about the approach.”

Innes isn’t worried about whether viewers “get” his point — and as an abstract painter, he is sure to garner reactions ranging from the dubious “this-isn’t-art” bystander to enthusiastic gallery-hoppers to the serious art scholar with an extensive framework through which to interpret his pieces. His work in the gallery isn’t accompanied by text explanations, which lets viewers make their own observations and conclusions.

“People connect on different levels, then you have the framework and then it can move forward,” Innes stresses. “It’s quite nice to experience something where there’s no interpretation, and if you like it, you can read about it.”

Whether or not viewers pick up on the minute intricacies of his work, they are likely to pick up on something. “People have different reactions — that’s a good thing. It’s interesting when you can change a reaction.”

Innes referenced a white canvas with subtle marking that he showed a few years ago as an example. “You had people coming in, going,” — Innes walks across the gallery, pausing for a second to glance at the imagined painting on the wall — “If they paused for two seconds, they would realize there’s actually a layer, a depth.”

Even if briefly, Innes is interested in capturing the viewer’s attention in this way. “We live in a society where — and I’m guilty of this, too — you have people walking around museums going ‘click click’ with their phone,” he continues, hand held up in mock picture-taking. “That beautiful experience of walking into a gallery — there’s no explanation, there’s no interpretation. You walk in, and you emotionally experience something whether you like it, you love it, you find it interesting. That’s kind of gone because people just record.”

In that way, Innes’ work serves as its own sort of record. The show marks a 20-year relationship of his working with gallerist Sean Kelly. “He doesn’t come to the studio and say ‘what have you got?’ We talk about it for two or three years in advance,” Innes remarks of their working relationship. “[It’s] an ongoing dialogue over time.” And while it’s difficult to notice in the present, a lot changes over multiple decades — both personally and politically.

“Ultimately, they’re not apolitical paintings,” Innes says of his work.“A fine artist takes a language forward. Some artists do big jumps, some artists do it in smaller jumps. You take a language and you work with a language, and you push it, and you keep pushing it.”