Diaz, who has retired from acting, looks to clean up the wine business with friend and Who What Wear founder Katherine Power.

If you had told Cameron Diaz in the height of her acting career that, fast-forward several years, she’d be a wine purveyor rather than an actor, she wouldn’t have been surprised.

“There have been plenty of times in my life where somebody was like, ‘Hey, let’s do this,’ and I’m like, ‘OK,’ and you start to go down the road. And then you’re like ‘I’m not really willing to put the time and energy into this thing that it takes for it to be real,’” Diaz says over the phone. “But this was a no-brainer.”

After many a relaxed wine night at home with her friend, Who What Wear founder Katherine Power, the two realized they knew very little about what went into the wine they were drinking — and that it was incredibly difficult to gather such information as consumers.

Enter Avaline, the new “clean,” vegan-friendly, organic wine label from Diaz and Power, which launched this summer with a rosé and a white (the name, per the baby names web site Power found it on, means “sensitive, humble and lively”).

“I’ve been a wine drinker for my whole life. As soon as I started to enjoy wine in my 20s, I never questioned what was in the bottle,” Diaz says. “I just thought, naively, it was just fermented grapes. And I think that’s pretty much what everybody kind of thinks.”

“We initially met through Nicole when Cameron and Benji [Madden, Diaz’s husband] got together,” Power says. A working relationship sprung “really naturally” from the friendship, Diaz says.

“We were social with one another and wine was part of our socializing: you have a glass of wine, hang out, chat. And we just realized that there was very little transparency in the wine industry [with] what we were drinking,” Diaz says. “We started questioning what was in the bottle. And when we realized that there was no way of telling what was in a bottle at any point in time, because it’s just not listed on the bottle anywhere, we started to realize that there were various things that could be added to the wine that we didn’t want to be consuming. And we knew that there was a whole group of consumers, wine drinkers, who didn’t want to be consuming those ingredients.”

“I think, oftentimes, the best business ideas come from a founder’s personal needs,” Power says. “And we bonded over the fact that we’re oriented around wellness. Cameron has written two science books essentially, books on the body. And I spend my day focused on and thinking about this Millennial-minded consumer who’s traded almost everything in her life out for something that is healthier or cleaner. And we just quite honestly started to question our own habits. As Cameron said, we wanted to provide a solution for ourselves, but also this demographic that I know so well, and that Cameron is so connected to.” 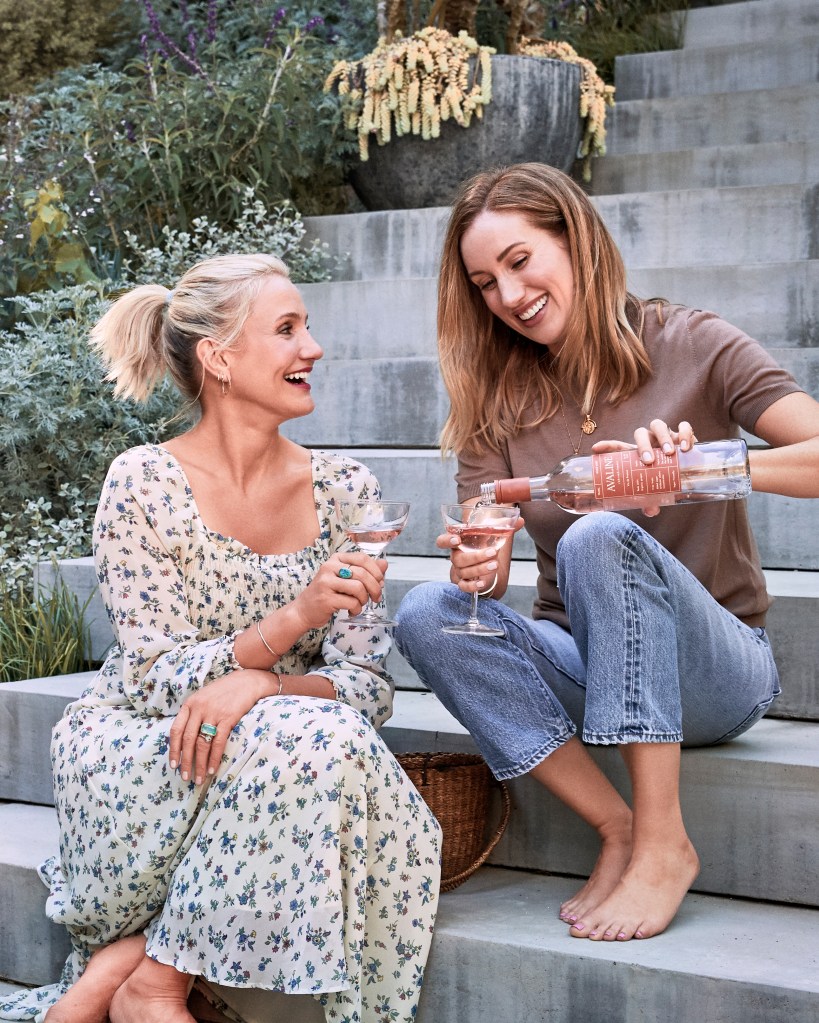 The duo set out to create a wine that uses only organic grapes that aren’t farmed using pesticides. (They use the term “clean” to describe their wine, which Diaz says is akin to the more commercially used term “natural wine,” though Avaline does not qualify as a natural wine.)

The two began the Avaline process two years ago. (Power likens it to learning a “very complex foreign language.”)

“I think what kept us going is while we don’t know a lot about wine, we know a lot about this consumer,” Power says. “And we knew that this consumer was starting to ask for more transparency and for cleaner products.” As the founder of Clique brands, which includes beauty line Versed, Power says the ability to launch with a focus on digital marketing is also a strength of Avaline’s.

“We saw a real opportunity to create a brand that is born digitally, that connects with this modern consumer,” Power says. “And that really hadn’t been done in this industry prior. So we’re really focusing on the lifestyle surrounding Avaline and, like a lot of brands in other categories, like beauty, really having this community driven branding, and community driven approach.”

Launching one’s own wine is nearly a time-honored tradition for the Hollywood set (summer 2020 is no exception, with wines from Mary J. Blige and Post Malone entering the market). But Diaz isn’t worried about Avaline being labeled a celebrity wine.

“That’s something you can’t get away with. I’ve been making movies for 25 years, so it’s going to be [there], and you can’t get away from that,” she says. “But we have a lot of confidence because it’s not about me, it is about the wine. Katherine and I have brought it into the world, but we’re giving it to our consumers to own as their own. And we have a lot of confidence that it will stand alone without me.”