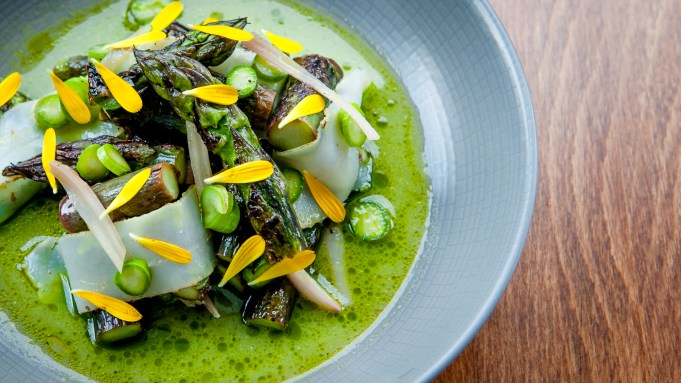 The latest restaurant to pop up in Brooklyn’s South Slope has longtime ties to the neighborhood. Opening Friday, Camperdown Elm — named for the historical tree in nearby Prospect Park, planted in 1872 by the park’s boathouse and immortalized in a poem by Marianne Moore — has filled the space left vacant by Dale Talde’s Thistle Hill Tavern.

When Nao Minami, who owns the property, was looking or a chef to open a new concept in the space, Brad Willits’ name came up. He most recently worked as executive sous chef at Claus Meyer’s Michelin-starred Agern and alongside Georges Mendes as chef de cuisine at both Lupulo and Aldea. “I wanted to bring a Michelin quality restaurant into a neighborhood like this and really bring down the prices,” says Minami, who nodded to the neighborhood’s shifting demographic — more Millennial and tech-savy, fewer strollers.

“I always wanted to work in Brooklyn — I’ve worked in the city for five years. The whole going to Manhattan and just the dining scene there is completely different than it is over here. It’s very stuffy,” he says. “I love it, but I was ready for a change from fine dining to something a lot more fun and casual.”

While the chef has brought his fine-dining training, as well as experience cooking in Charleston and Baltimore, to the menu, Willits stresses that the cuisine isn’t overly technical. His approach? “Great ingredients, cooked very nicely, prepared simply. We don’t want to go too cool.”

What that looks like is familiar dishes done in elegant and interesting renderings: smoky grilled cucumbers stuffed with roe and ramp oil; charred sardines in puréed avocado; Arctic char with potato salad and mustard seed. The menu is designed toward portion customization, with an emphasis on smaller shared plates that can be arranged into a tasting-style experience.

The team also put a good amount of elbow grease into the space, building out the bar and shelving themselves. The cozy venue features exposed brick walls and honey-toned wooden tables, with blue-painted accents throughout the space. A large window in the dining room looks out on the bustling corner of Seventh Avenue and 15th Street.

“People that are coming in are just so excited and positive,” says Willits of the restaurant’s preopening foot traffic. “I’m ready to start having a lot more fun, you know what I mean?”