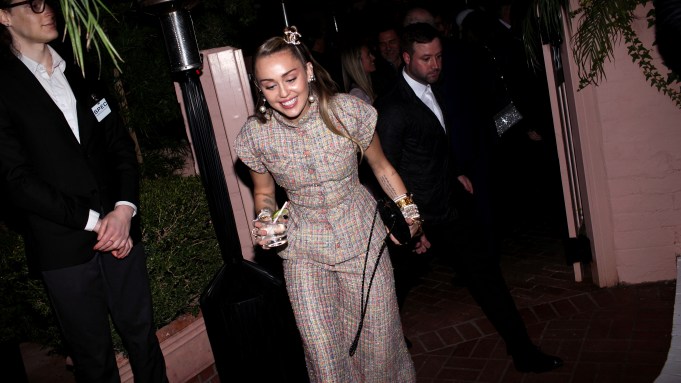 Dispatch from L.A., where team WWD traveled for all the parties leading up to the Oscars.

Roll up to a not-so-shabby residence in Beverly Hills for the Red Carpet Green Dress Event. The vibe is interestingly unclear — a touch awkward, a bit confused, maybe somewhat static — and I’m not sure if Michelle Rodriguez helped much in clarifying this vibe. But to the event’s defense, we arrived really on time. In any case, Lakeith Stanfield arrives and loosens things up with a very welcomed playful personality in tow.

Wedge into my spot on the carpet for Women in Film and am so relieved to see two photographers I know (it’s a very good thing to know and befriend surrounding photographers, on the carpet especially, to ease the edge of a normally aggressive environment). But in Los Angeles, this proves not much of a concern. Everyone is super pleasant and supportive — and this is the feeling all around. Glenn Close and Yalitza Aparicio, both in all-white looks, embrace and emit a serendipitous glow. Inside, I spot the stunning (and much taller than me) Angela Sarafyan. Tiptoeing to take her photo at a more normalized angle, she in turn crouches down, remarking with a wink, “When you go high, I go low.”

Walking — rather squeezing — into the Giorgio Armani store party, expecting only to grab a quick photo of Glenn Close (for whom the party was thrown), and I am abruptly flung into a game of celebrity whack-a-mole: attempting whilst swallowed by the crowd to get a shot of Camilla Belle on my left, Samuel L. Jackson on my right, Karolina Kurkova behind me. Also, while waiting for Ava DuVernay, Holland Roden, Nikki Reed, and Topher Grace to reveal themselves in this totally self-appointed game I was playing, I try for any shot of Glenn I could muster overhead as she was swarmed by adoring fans and friends, all wanting just a Chiclet-size piece of that mile-wide smile (and to offer an earnest congratulations for her nomination).

Next, Chanel. Chanel parties are always my favorite: the guests never not look amazing, the venues are effortlessly fabulous, and the public relations team is a dream. The dinner hosted with Charles Finch at the Beverly Hills Hotel is fully no exception. Kristen Stewart is the cool babe we all know and love. Miley Cyrus is the adorably bubbly superstar (as she bounces up the steps from the twinkly courtyard holding a cocktail, laughing as she claimed, “You caught me red-handed!” as I took her picture in the moment). And Michael Keaton is my new best friend, jokingly warning me, “Frances [McDormand] is going to get mad at you for taking her picture.” I shrug and say I wanted a photo of him instead, and willfully, he obliges.

Finally, O Day. So much to say to recount this day; perhaps, a little *too* much. So, I’ll keep it sweet. After a blur on the carpet, with the expected wild reactions for Jennifer Lopez in her body con hologram, Constance Wu in a long-winded yellow spin, and Gaga with her $30 million diamond date, I take to the bleachers in the photo room for the next four hours to capture the winners with their new golden friends. Following the most coveted shot of the four big winners — Rami Malek, Olivia Colman, Regina King, Mahershala Ali — photographers strongly request (read: desperately plead) for Rami to pose for a solo shot. As an Oscars staffer helps straighten his bowtie, Rami promises, “If you wait just one second, I’ll give you everything you want.”