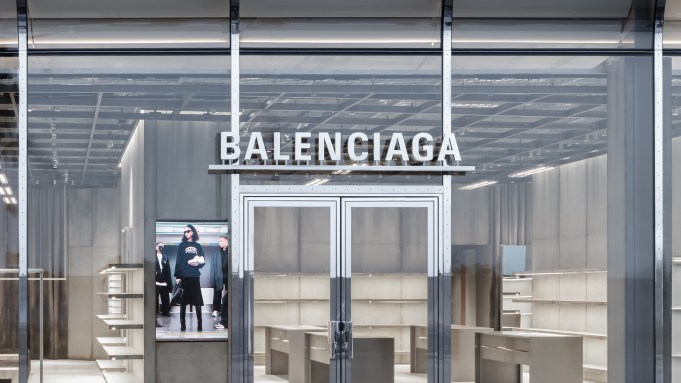 The buzz is back on the Croisette, as Cannes gears up for a full-on film festival after two years of muted events and virtual gatherings. Not only is the festival celebrating its 75th birthday, the city itself has been undergoing a bit of a makeover. With a new luxury tech hub from LaunchMetrics and TikTok opening at Université Côte d’Azur last year, and the ongoing efforts of Mayor David Lisnard to transform the town into a luxury destination outside of the famous two weeks in May, Cannes is camera ready.

Balenciaga brings a harder edge to the Croisette, putting down its sartorial stakes at the center of the newly sleek JW Marriott. The hotel itself underwent a 70 million euro renovation, which debuted last summer. Gone are the red balconies, replaced with undulating steel and glass at the hands of architect Alain Moatti.

Balenciaga added to this urban aesthetic with the latest outpost of its “raw architecture” ethos, the deconstructed brainchild of creative director Demna. The design shows off the bones of the building and leaves surfaces untouched, all concrete slabs and exposed beams. The concept has sustainable street cred: the shop’s design consumes fewer virgin materials and meets parent company Kering’s guidelines, the brand says.

Balenciaga bills this as a space “suspended in a state of progress.” Just steps from the beach, it serves as a contrast — and perhaps a respite — from the glitzy retro glamour that characterizes the city.

Louis Vuitton is giving its men’s collection its own footprint. The house will open a pop-up dedicated to the men’s collection during the festival featuring the just-launched final collection of late designer Virgil Abloh. The pre-fall/winter collection was completed and shot by Abloh before he passed away last year, along with Milan-based tattoo artist Ghusto Leon. The collection brings graffitied suits, embroidered workwear and hand-bleached quilted bombers to the temporary store, which will be open through the end of summer.

Dolce & Gabbana has opened its new South of France flagship just steps away from the red carpet on the ground floor of the glossy new First Croisette. Steeped in Art Deco style, the three-story mega shop is flanked by two green and white marble staircases.

Sun, sea and a lot of late nights at Silencio can take a toll on your skin. Augustinus Bader is coming to the rescue with a pop-up wellness center at the Grand Hotel. Celebrity facialist Gavin McLeod-Valentine will be on hand to deliver The Method Facials from the namesake cult medical-grade brand from German scientist Bader. Taking over the hotel’s famed beach, they’ve created a seaside haven for skin care treatments, as well as workouts led by Workshop Gymnasium’s Lee Mullins and bespoke manicures from Harriet Westmoreland. The hotel itself is undergoing a transformation — some rooms have been redone and it will debut its face lift as a Mondrian next year. Bader on the beach will be open from Wednesday through May 28 for treatments.

Silencio designer Raphael Navot has broadened his horizons to gaze across the Med for the Hotel Belle Plage, the newest gem in La Cle Group’s growing treasure chest. He’s created a breezy reinterpretation of classic Riviera style, with natural woods, stone and terrazzo to extend the breezy beach vibe throughout. With just 50 rooms and 10 private residences, the exclusive hotel has a private garden conceived by landscape designer Gwenaelle Grandjean. Israeli chef Eyal Shani of Paris’ Miznon brings his Mediterranean flair to the rooftop restaurant, Bella. Shani seeks out vegetables and regional products, which he says is less a menu than a life philosophy. The menu is updated daily depending on what he finds on his morning market hunts.

Six stories above the Balenciaga store, the rooftop of the JW Marriott welcomes Benoit Dargere. The French chef has decamped from the Louvre for a Loulou pop-up of his Parisian institution. The restaurant is open every day from 11 a.m. to 3 p.m. for those famously lingering South of France lunches. Dargere will serve up his signature style of Mediterranean dishes with an Italian touch, featuring pasta and fresh seafood. Jean-Charles de Castelbajac is behind the restaurant’s signature design, which will be imported for the restaurant’s two-week tenure.

After two decades as a Saint Tropez staple, Salama has opened a second outpost in Cannes. The restaurant created a magical Moroccan haven in the back streets of downtown, set on a cul-de-sac that’s away from the hustle and bustle of the Croisette. Imagined by Oreka Architects as a maze of arches, coves, under caned ceilings from Home Trees and woven textiles from Riad Jean Noel in Marrakech, the restaurant glows with candle light. The menu blends traditional dishes from the Maghreb with Mediterranean cuisine, featuring couscous, tagines and local seafood.