The Danish artist details the annual festival in his new book, "Nothing Left Behind." 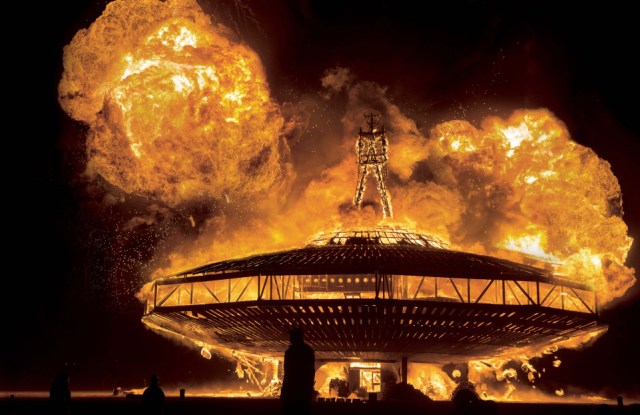 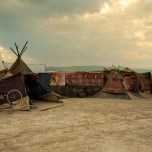 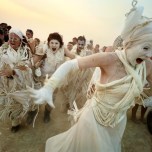 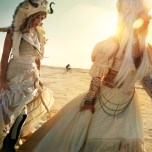 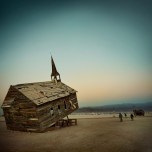 When trying to describe Burning Man, the annual weeklong festival of unbridled self-expression in Black Rock Desert, Nev., attendees — known colloquially as “Burners” — often default to platitudes such as “incredible,” “life changing,” or simply, “you had to be there” in describing their experience during the last week of August.

But as they say, a picture is worth a thousand words. In 2013, photographer and director Anders Overgaard ventured into the barren, dust-filled landscape knowing only that he wanted to accurately capture the festival’s ethereal splendor. Waking each day at 4 a.m., Overgaard traipsed tirelessly through the tent city and among the temporary art installations to capture celebrants — still awake from the night before — in all manner of unique costume.

Many of those arresting images have made their way into a limited-edition book titled “Nothing Left Behind,” and an exhibition of the same name debuting Sept. 27 at the Jason McCoy Gallery in New York.

“We would start shooting as the light was rising,” remarks the Danish-born photographer. “I love that magic hour.” Wrapping his camera in a “plastic ball” of electrical tape, Overgaard would spend midday traveling the unforgiving terrain on bicycle and obsessively capturing candid photos of the free-spirited masses.

“I have 20,000 frames to work with and I felt like we covered that in a big way,” remarks the former assistant to Bruce Weber. “I was all over that thing and I just wanted to shoot it like a crazy person. It was all about the pictures. That’s all I wanted to do.”

The majority of festivalgoers Overgaard interacted with, many of whom were from creative fields including “stylists, filmmakers, artists, musicians and fashion people,” inspired the photographer’s work even though no set project was in place at the time.

“I didn’t really know what I was going into,” he explains. “When I left, I really felt I had won Wimbledon or something. It was such an achievement. I had no idea how I would capture the whole thing and I felt a little desperate that I would never achieve this.”

He adds, “I knew I left with something very special, but I didn’t know really what I was going to [do with it].” For nearly four years, Overgaard engaged in a dialog with the Burning Man group, which resulted in the production of the hand-bound 197-page book.

Although many make the festival a yearly pilgrimage, Overgaard vows he “would never go again,” due to his satisfaction with the project’s final product. “I loved it so much, but it’s hard to go back when you feel like you’ve done what you came to do. I don’t think I could do another book and I don’t want to be out there without a camera.”

The artist is in talks with the organizing committee to return next year for work on a documentary film, which Overgaard notes would be “a whole different approach” to covering the event.

As for his favorite image from the collection, Overgaard singles out the book’s cover shot showing a towering effigy atop its saucer-shaped base. This large-scale art installation — known as “the man” — inspires the festival’s name and the week’s end is marked by its fiery destruction, an act that illustrates the beauty in the gathering’s ephemeral nature. “To me it makes it even more special that the art pieces burned and are gone,” he says with a laugh. “It really is one-off. Maybe somebody else out there got that image, I’m not sure, but to me it’s very unique.”