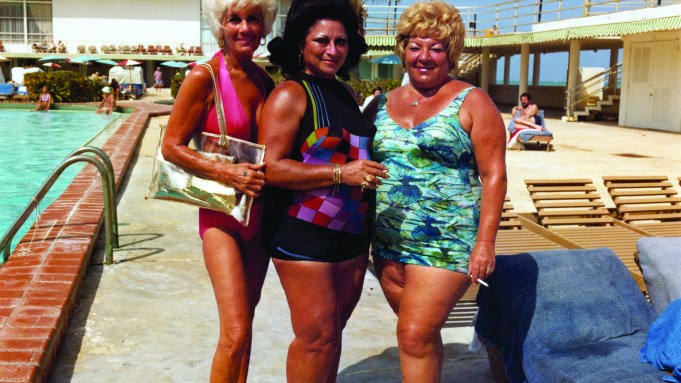 A new photography book reveals that New Yorkers were in the wrong all those years when they referred to Miami Beach as God’s waiting room. “Shtetl in the Sun: Andy Sweet’s South Beach 1977-1980,” which Letter16 Press publishes this month, chronicles how their bubbes and zaydes were really on a rip-roaring, permanent spring break for old folks.

“These people weren’t waiting to die. They were full of life — loving, exercising, dancing or just hanging out,” said Brett Sokol, a Miami Beach-based journalist and cofounder of Letter16 Press, who edited the book about the late photographer’s work and contributed the foreword. “I’m Jewish and didn’t even know that the stigma wasn’t true. But you don’t have to know anything about Jewish culture or South Beach to be drawn to Andy’s photos.”

Lauren Groff, a novelist from Florida who wrote the introductory essay, also fell for Sweet’s laugh-out-loud images: The retro outfits and unsexy swimwear; raw expressions, which portray a realness virtually absent in today’s filtered selfies, and hairdos, as well as ill-fitting wigs. Almost everyone recalls senior citizens parked in rows of beach chairs on the front porches of Art Deco hotels along Ocean Drive and Collins Avenue, but here they’re also shown smiling with their girlfriends at the pool like giddy teenagers, dancing in the surf and out on the town.

These 20,000 elderly Jews seemingly did live in a bubble, hence the comparison of Seventies South Beach to an Eastern European shtetl.

“You’d hear Yiddish in the streets as much or more than English,” said Sokol, whose nonprofit publishing house helped Sweet’s family restore his work prints, of which 132 color photographs appear in the book, since his negatives are lost.

Though black-and-white photography was exclusively deemed fine art at the time, Sweet shot in garish color to highlight the era’s profusion of plaid. His camera of choice, a Hasselblad, was also unconventional for its square, or medium, format versus traditional 35 mm. The unobtrusive act of looking down into the camera instead of dead ahead at his subjects enabled him to capture candids in the same speed and off-the-cuff style as Warhol’s Polaroids.

“He had a run-and-gun approach to shooting and a real eye for material,” said Sokol, who’s also collaborating with the Jewish Museum of Florida-FIU for an exhibit of Sweet’s photos and ephemera on view from March 19 through early June.

Sweet was murdered by drug-addled drifters in his apartment in 1982, but he’s finally getting his moment in the spotlight. In addition to the book and exhibit, a documentary about his and his friend and photographer Gary Monroe’s depiction of this fleeting Florida moment, “The Last Resort,” will be released this year. Letter16 Press has already begun raising funds for a second volume of his work through the sale of 11 of his photographs in editions of seven.

“If you think the fashions in the first book are stunning, wait until you see the next,” said Sokol.