More than a year after her exit from French Vogue, the editor has a new magazine to call her own. 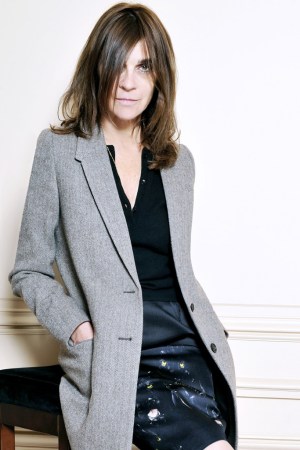 The name of Carine Roitfeld’s new magazine, closely guarded for months, has been in plain sight for a decade.

“CR,” the handwritten initials that appeared under all her editor’s letters during her 10 years at the helm of French Vogue, will be scrawled across the matte cover of her new biannual, with the first issue slated for September.

“The name’s not a big surprise, but oh well,” Roitfeld said, disclosing details exclusively to WWD, and proudly showing off a mock-up of the slightly oversize publication.

Indeed, Roitfeld stressed it’s what’s inside her new magazine that counts, describing it as a “celebration of fashion and creativity” from a mix of well-known talents and promising upstarts — and that applies to the photographers, writers, models and stylists.

“I’m in the middle of searching for new talents, and it’s so exciting and energizing,” she said.

“Carine Roitfeld is one of the most talented editors in our industry. She deserves an editorial platform with which to express herself, and I’m happy to provide one,” said Fashion Media founder Stephen Gan. “I hope it will enlighten. I hope it will build bridges not walls. The fashion magazine industry has gotten too political.”

Fashion Media is projecting more than 100 pages of advertising in the first 288-page issue, which will carry a cover price of $9.95.

Roitfeld, who attended meetings with potential advertisers for the first time in her career — including Gucci, Chanel, Giorgio Armani, Cartier and Louis Vuitton — said she found them “very receptive and eager to participate.”

Some 50,000 copies will be printed, with roughly half the distribution in Europe, and the balance in Asia and the U.S. Reflecting the title’s trendy and freelance spirit, offices will be based at The Standard hotel in New York’s East Village.

Sipping tea in the bar at the Crillon hotel in Paris and juggling two BlackBerries, Roitfeld excitedly discussed what she described as a “personal” project, and one that reflects both her maturity as a fashion professional, and her wish to keep innovating. She quoted an Apple Computers slogan from the Nineties — “think different” — as her modus operandi.

Unusual features of CR extend to advertising: It will only carry spreads, echoing the book-like mission of editorial, with no front-of-book section and only longer-format articles. “I hope people will want to keep it —trendy and timeless at the same time,” she said.

CR Fashion Book will also have an online component, which Roitfeld described as “the perfect platform” for front-of-book content across fashion, art and culture. She said the site would be updated frequently, and teasers for upcoming issues will be posted.

Each issue will be constructed around a theme, such as music, or “obsession,” which is the case for the mock-up shown to advertisers. Across fashion and beauty spreads, models resembling characters out of William Klein’s 1966 French film “Who are you, Polly Magoo?” are depicted gazing at themselves obsessively in mirrors.

Although CR is an English publication, Roitfeld said she intends to publish certain articles in the native language of their author, with translations to be found at the back. For example, if filmmaker Pedro Almodóvar were to pen something for her, it would be in Spanish.

Displaying the mock-up on an iPad, she showed off articles written in Arabic, Japanese and Russian. “C’est jolie, non?” Roitfeld, whose speech flip-flops between English and French, said of those various scripts.

Personal touches include Roitfeld’s initials at the top of pages — with a slash through the letters as on personal stationery — and handwritten titles for sections titled Icons, Muses, Skincare and Fitness.

Known for producing provocative and sometimes sexually charged imagery, Roitfeld said she intends to continue styling shoots, and to “find new ways to be irreverent” after some 30 years in the business. “Not necessarily safer, but different,” she vowed.

“It will always be edgy. Maybe it will be more mental than physical,” she mused.

The mock-up contains credits from both the established and upstarts, including a cover by New York-based Argentinian photographer Sebastian Faena and an opening spread with a never-before-seen Bruce Weber portrait of Patti Smith in a frothy gown.

Roitfeld noted she would not be able to work with certain photographers who have contractual ties to other magazines, Mario Testino being one example.

The editor said she has yet to start work on the September issue, and is keeping its theme, contributors and confirmed advertisers under wraps.

Since exiting French Vogue in January 2011, Roitfeld has kept herself in fashion’s spotlight via a range of projects, including a stint as guest editor and stylist for Barneys New York, a Rizzoli tome about her career and a book with Karl Lagerfeld about Chanel’s famous black jacket. Foreshadowing tightened ties with Visionaire, she guest edited the spring fashion issue of VMan.

She brushed off suggestions that the launch of CR represents a form of revenge, given that her exit from Condé Nast was cloaked in intrigue.

“Vogue is a very beautiful magazine, an institution, and I learned so much working there,” she said. “You can’t put yourself into competition with a magazine like Vogue; you have to create something new, something different.

“The page has been turned,” she continued. “It’s time to find something new, something fresh — for me and for the readers.”

Fantasy and pleasure are some of the emotions she hopes to evoke with the magazine. “I find that some people in fashion are so blasé. Fashion has to be fun,” she said.

Roitfeld characterized CR as a “project between other projects,” noting she would continue to work as a “sort of muse” to Givenchy designer Riccardo Tisci, and style advertising campaigns for the likes of Max Mara and Chanel.

She’s also the subject of a feature-length documentary by Fabien Constant slated to hit screens sometime in 2013. Constant has already been tailing her at fashion shows, parties and shoots, and will dig into the making of her new magazine.

“It’s like a new baby,” Roitfeld said of CR Fashion Book. And that isn’t the only one: Her daughter Julia Restoin-Roitfeld is expecting shortly. “I will be babushka in six weeks,” she said, flashing a big smile.