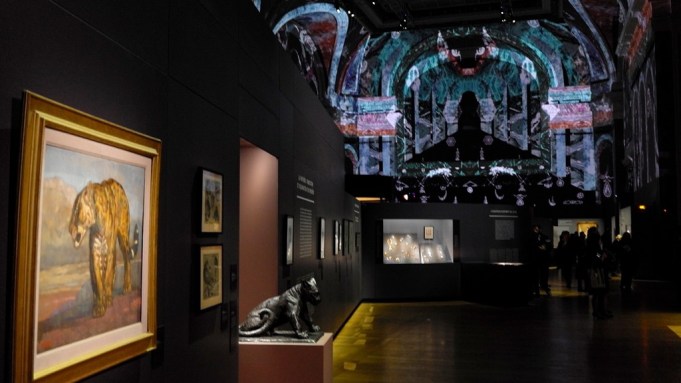 Kate Middleton’s wedding tiara and Grace Kelly’s engagement ring are among the star pieces of an exhibition on Cartier opening in Paris today.

Billed as the most extensive show to date dedicated to the French jeweler, famed for its panther-themed jewelry and Tank watches, “Cartier — Style and History” is set to run at the Grand Palais until Feb. 16. It showcases more than 600 items ranging from fine jewelry and watches to decorative objects, many reflecting the influence of exotic locations like China and India. Most are drawn from Cartier’s extensive archives, but about 100 items are on loan from private collections.

“Never before have we shared with the public this many items,” said Stanislas de Quercize, Cartier’s chief executive officer. Noting that the last major exhibition on Cartier in the French capital was held in 1989, he said the fine jewelry segment was thriving as clients worldwide become increasingly savvy and demanding.

“We are celebrating a golden age,” said de Quercize. “Clearly, art is a part of Cartier and Cartier is a part of art. The letters A-R-T even feature in the word Cartier. And I think you can see the value of the style, its uniqueness and the fact that the Cartier style is both universal and timeless.”

Though the executive declined to provide figures, Cartier generates the lion’s share of sales at luxury conglomerate Compagnie Financière Richemont, which totaled 10.15 billion euros, or $13.09 billion, in the financial year ending March 31.

The Grand Palais show is organized chronologically and features scores of illustrations and documents, alongside period clothing, designed to put the creations in context.

“I really think there are a lot of surprises awaiting visitors to this show,” said Laurence Dalon, one of the two curators who devised the exhibit. “When I started work on the exhibition, I had no idea there was such a strong family backbone to the house, nor that it was founded as early as the middle of the 19th century.”

The exhibit traces the evolution from the garland-style diamond brooches of the mid-19th century to the modern looks launched circa 1910, based on geometric motifs and incorporating the use of more vividly colored stones — such as a diamond, emerald, coral and pearl bracelet that once belonged to socialite Daisy Fellowes.

Pieces on public display for the first time include the 478-carat cushion-cut sapphire owned by Queen Marie of Romania — billed as one of the largest cut sapphires ever documented.

Among other notable items is a flower-shaped brooch set with the Williamson pink diamond, a favorite of Britain’s Queen Elizabeth II. This is on loan from the Royal Collection, as is Middleton’s Halo tiara, originally purchased by the-then Duke of York (later King George VI) for his wife in 1936 and later given to their daughter Elizabeth II on her 18th birthday.

Cartier has also loaned a restored version of the spectacular necklace ordered by the Maharaja of Patiala in 1928, featuring a replica of the original 234.65-carat De Beers diamond that was its centerpiece, and a sword designed by French poet Jean Cocteau to celebrate his entry into the French Academy.

On the watchmaking front, there are early examples of the Tank, alongside a photograph of silent movie actor Rudolph Valentino wearing his in the 1926 movie “The Son of the Sheik.”

A central rotunda displays 18 examples of Mystery Clocks, of which only about 100 were made between 1912 and 1930. These feature rotating dials made from rock crystal that make it appear that the clock’s hands are floating in thin air.

The latter section of the exhibit puts the spotlight on celebrity clients such as Elizabeth Taylor, the Duchess of Windsor and Mexican actress María Félix, who owned pieces including two imposing crocodiles that could be worn as a necklace. It also features a section on American heiress Marjorie Merriweather Post, with items on loan from Hillwood, the private museum operating in her former estate in Washington, D.C.

“We are really happy to showcase her, because Liz Taylor and Grace of Monaco are well-known personalities that could also be linked to other jewelers they bought from. But Marjorie Post is a character that European visitors will be relatively unfamiliar with and who was Cartier’s biggest customer in New York,” Dalon said.

De Quercize said further exhibitions are planned in Shanghai in July and Denver in November.

“We think it is part of our mission to share, because 90 percent of men and women nowadays buy jewelry that is not signed, which is a mistake. You wouldn’t buy a painting that isn’t signed. So you have to explain the style, the history and the long-term value of these objects,” the executive said.