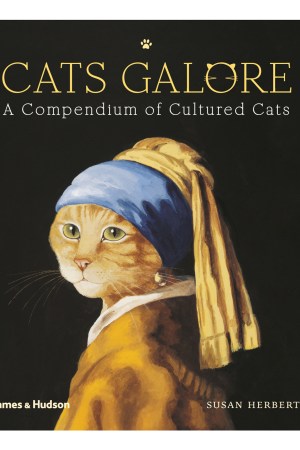 Fans of the feline will get a charge out of “Cats Galore: A Compendium of Cultured Cats” created by painter Susan Herbert and due out from Thames & Hudson on Sept. 8. The cover of the book features Herbert’s version of Johannes Vermeer’s painting “Girl With a Pearl Earring,” believed to have been painted around 1665. Images inside include renditions of artworks such as Leonardo Da Vinci’s “The Mona Lisa” (1503-1506); Jan Van Eyck’s canvas “The Arnolfini Marriage” (1434); Sandro Botticelli’s “The Birth of Venus” (1456), Edouard Manet’s “Bar at the Folies-Bergere” (1882), and Vincent Van Gogh’s “Self-Portrait with Bandaged Ear and Pipe” (1889). Other works of art adapted in a catty manner include the “Cover of the Coffin of Tutankhamun” (1340 B.C.) and a vase by Exekias, “Achilles Slays Penthesilea” (c. 540-530 B.C.), along with an image of Empress Theodora from a 6th century mosaic in the Church of San Vitale in Ravenna.

Then there’s the “Cats on Stage” section, which interprets Shakespeare’s plays and includes quotes from the Bard, among them specific scenes from “A Midsummer Night’s Dream,” “Romeo and Juliet,” “Henry V” and “Othello,” shown with the verses they illustrate. There are felinized scenes from operas such as Richard Strauss’ “Der Rosenkavalier;” Giacomo Puccini’s “Turandot,” and Giuseppe Verdi’s “Aida.”

Featured in the “Cats in the Movies” section are versions of Julie Andrews in “The Sound of Music,” 1965; Audrey Hepburn in “My Fair Lady,” 1960; Marlene Dietrich in “The Blue Angel,” 1930, and Elizabeth Taylor in “Cleopatra,” 1963. Cat lovers will be eager to get their claws on this beautiful book.