The musical “Gigi” is coming to the Broadway stage again in a lavish production starring Vanessa Hudgens in the title role, which is due to open April 8. 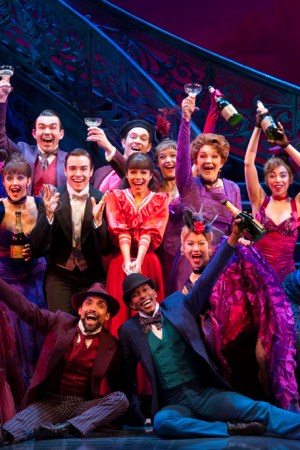 The delightful story, based on a tale Colette wrote to lift her readers’ spirits during the German Occupation of Paris; the beautiful Lerner and Loewe songs, the charming and idiosyncratic characters…Yes, the musical “Gigi,” also set in the Belle Epoque world of the writer’s earlier success “Cheri,” has a lot to recommend it. Now it is coming to the Broadway stage again in a lavish, $12 million production at the Neil Simon Theatre starring Vanessa Hudgens in the title role, which is due to open April 8. The last Broadway version of this musical in 1973 was a flop, which is a bit difficult to understand, except possibly that its evanescent charm wasn’t appreciated in such a crass period. But the current production seems to have a better chance. Hudgens is well-cast in the title role, and executes the singing and dancing with panache, while easily carrying off the girlishness that is critical to the beginning of the piece.

Costuming such a musical must have been a bit intimidating, especially since Cecil Beaton, the costume designer for the famous 1958 film starring Leslie Caron, Louis Jourdan and Maurice Chevalier, won an Oscar for his efforts, one of nine the production took home. And indeed, it was, says Catherine Zuber, who did the clothes for this one. But not quite as intimidating as some of her earlier jobs. In one, which was a series of pageants put on for a regional wine appellation, she actually had to dress 6,000 people over three years, of which about 30 were professional performers. She also had to costume oxen and horses along with the people who cleaned up after the animals. She became adept at instantly costuming someone without even measuring them. She also worked on the 1979 vampire film “Salem’s Lot.”

Another early assignment was as costume designer for a production of “The Good Person of Szechwan,” a Bertold Brecht play that got a lot of attention.

Zuber came to costume design in a roundabout way. She studied photography at the School of the Museum of Fine Arts, Boston, but she felt that her commitment to the medium was not as great as those of her friends. “We were only kids at the time,” she says. One of them was her then-boyfriend, the now well-known lensman Philip Lorca diCorcia. He studied for a master’s at Yale, and she went with him. It wasn’t until later, when she began picking up assignments creating costumes, that she discovered that this new métier meant to her what photography did to the others. She then went on to study at Yale herself, but costume design instead. She was 30 when she was there, so she felt driven to get on with exploring her profession. “When I first got there, I didn’t know what a proscenium was,” she says.

The designer says that she enjoyed working with Hudgens because the actress was very aware of how innocent Gigi must look at the beginning of the play, and was happy to cooperate in wearing costumes that showed it. For the spring scene outdoors on the Bois de Boulogne, Zuber says, “I wanted to keep the ensemble in the colors of macaroons” — i.e. sugary pastels.

Zuber found the sea-bathing costumes for the Trouville scene fun to do; she says that several of the cast members wished they could buy swimsuits like the ones she put them in (these are fairly covered up and striped, though they don’t include the stockings women would really have worn at the time). “I wanted them to have kind of playful elements — modest and cute,” she says. Some of the suits the players had to be able to dance in. She saw the masked ball in black and white, while the evening looks at Maxim’s came in layers, with chiffon over satin. She says she intended that scene to have a smoky quality, with the fabrics of the clothes having reflective elements.

Zuber is also currently working on the Broadway production of “The King and I,” from which she particularly praises Ken Watanabe as the King, and adds that the cast consists of 51 people. She says that she will be doing “Otello” at the Metropolitan Opera, due to open in September. “I love doing opera — it’s something that’s already stylized,” she says.