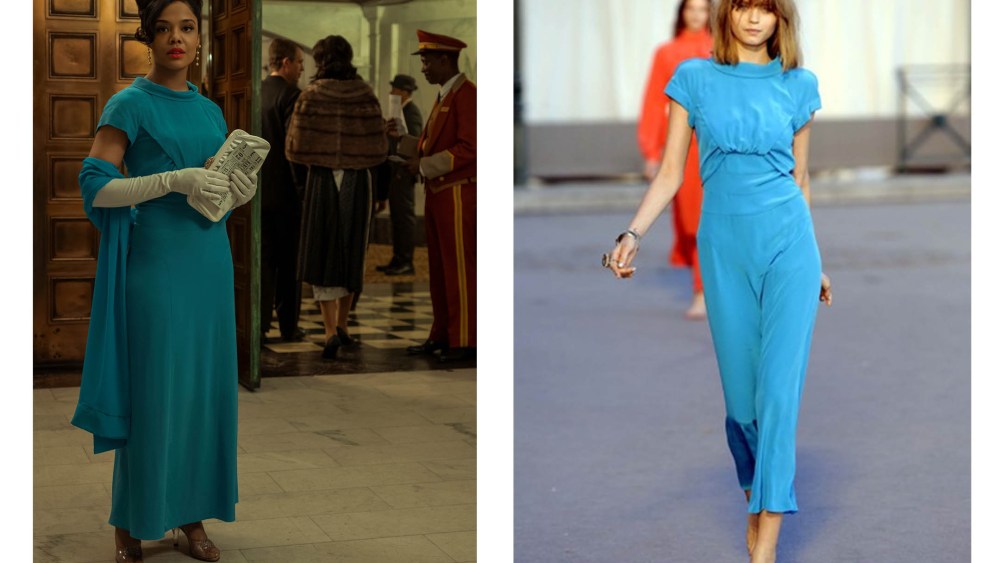 “Sylvie’s Love,” the Sundance darling starring Tessa Thompson and Nnamdi Asomugha that is out now on Amazon, is first and foremost a sweeping love story — and the clothes are part of telling that romance.

The costume wardrobe was almost entirely built out of finds from vintage stores from Florida to Arizona — with the exception of three Chanel items from the Karl Lagerfeld era, selected by costume designer Phoenix Mellow and worn by Thompson, making for a one-of-a-kind wardrobe.

The film follows Sylvie through young adulthood into the next decade-plus of her life, stretching from the 1950s into the 1960s. When we first meet her she wears clothes infused with a youthful innocence that are on trend for the time.

“Sylvie, she is a girl in the beginning, in the Fifties. She has her father’s influence and he runs a store in Harlem that sells music, so she gets this groovy side from him, and then you have the mother who runs a finishing school for young women and she goes to cotillion and she has to live up to her mother’s expectations of becoming a proper lady of society,” Mellow says. “For that, I was really inspired by Audrey Hepburn obviously, but it was more who was dressing Audrey rather than Audrey. She has her own sense of style, but Tessa has her own sense of style, too. I just knew that Tessa was going to embrace the fashion element of the movie because she is a style icon. Reading the script, I just knew that she can pull off these kinds of colors and elements that just feel more natural to her.”

That resulted in formfitting sheath dresses, pencil skirts, cropped trousers, cuffed denim: things that gave her a youthful innocence that were not overtly sexy.

In the ’60s, as Sylvie is growing into an adult (becoming a mother and a professional), she becomes more refined in her style.

“She is wealthy and she’s a businesswoman. She probably reads all the latest fashion magazines. She is a go-getter and she dresses for the job that she wants,” Mellow says. Her inspirations for that phase were Diane Carroll, Grace Kelly, Ruby Dee and Mary Tyler Moore.

The ’60s were also where we see the introduction of Chanel in Sylvie’s wardrobe. Mellow reached out to the brand through Thompson, given the actress’ relationship with the house as an ambassador. They sent over the script and mood boards, and in return Chanel let Mellow go through the archives in search of perfect ’60s silhouettes. It was their Hepburn/Givenchy moment.

“The whole reason why we even reached out to Chanel was because Eugene [Ashe, the film’s director] and I were so obsessed with how Givenchy had dressed Audrey Hepburn in some of these films,” Mellow says.

When Thompson first put on the teal long silk gown with logo-embellished buttons up the back, from the resort 2011 collection, “it was this Cinderella moment,” Mellow says. The dress is a georgette collared, capped sleeve gown buttons up the back bearing the interlocking Cs Chanel logo. Mellow paired the dress with vintage pearl drop earrings, vintage matte gloves, a vintage clutch and vintage Lucite heels.

Sylvie’s next Chanel look is seen in the New Year’s Eve scene: a black sequined gown with a white satin collar.

“Eugene had written in the script that Sylvie was in her little black dress. He always envisioned a black cocktail moment, which is famous from ‘Breakfast at Tiffany’s’ and we’re always thinking about Audrey’s style,” Mellow says. “That black dress is also Chanel. I saw it on the runway and I just was like, ‘Wow, that looks so reminiscent of some of the designers of that era but bumped up.’”

She normally isn’t a fan of black clothing on camera, unless it has “a really strong silhouette or it needs to have a richness in the fabric,” and luckily for her the Chanel number was embellished with beading and sequins. Again, Mellow paired the Chanel dress with vintage accessories.

The third and final Chanel look Sylvie wears is a dark navy tweed dress with a wide boatneck collar and short sleeves, which she wears when Robert sees her work and then they go out to a Chinese restaurant.

“It just framed her face perfectly,” Mellow says of the dress’ fit. “It just felt so right for the character, the understated color, but then the strong silhouette. And of course, as soon as something’s right, when you put it on Tessa, you can just all of a sudden see her posture changing. She becomes Sylvie and you’re like, ‘We’ll have to use that.’”