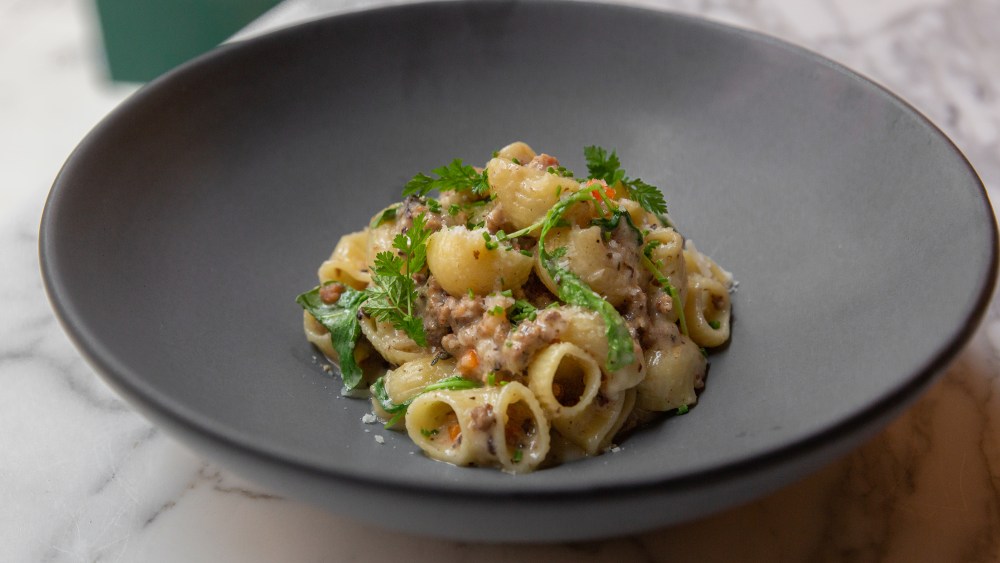 The concept for Portale goes back several years during a trip chef Alfred Portale took to the South of France, near the French Riviera.

“It made so much sense to me on multiple levels: it was sexy, it was young it was fashionable, it was healthy. it was the kind of food I like to eat,” says Portale, who left his post at Gotham Bar and Grill this summer after three decades of the inspiration.

In other words, the concept was Italian through the lens of French technique. Portale, who is of Sicilian descent, spent his career working in French three Michelin starred restaurants. He developed a dining concept for a hotel that didn’t get built while still at Gotham Bar and Grill, but the desire to open an Italian restaurant stuck. So he decided to go it alone.

“It became clear that my Gotham partners — one’s 83 — they just weren’t interested in doing another restaurant,” says Portale. “I’m a partner at Gotham, a large partner, but I’m free to do what I want. So I always wanted to do an Italian restaurant, and the time just seemed like if I didn’t do it now, it would be too late.”

He started looking for spaces and eventually stumbled upon the former carriage house on 18th street between Sixth and Seventh Avenues, most recently home to Rogue Tomate. The space features two kitchens on two floors, a private dining room and around 110 seats between the two dining rooms and bar. It’s also located nearby the Green Market in Union Square, allowing the chef to tap into longstanding relationships he had developed through his years at Gotham.

“A midcentury Milano kind of elegance, all placed within the rustification of the original structure,” describes Drew Stuart of INC Architecture & Design. “Italian architects have this long history of retaining the shell, letting it do its thing, and then having the modern insertion.”

Portale also represents a move away from the formality of fine dining: the tableclothes of Gotham are gone, the price point is lower, and the level of service veers informal.

“I’m trying to create something here that is family-friendly,” Portale says. “It really caters to the neighborhood. Just by virtue of being my restaurant it’s going to be a destination restaurant, but I still want to embrace the neighborhood.”

Although Portale cooked many popular dishes during his tenure at Gotham, the menu at his restaurant is entirely new.

“I’ve had a lot of hits at Gotham over the years, a million really good dishes, but I was determined not to repeat any of them, at least for the opening. I just didn’t want anyone to say, ‘oh, he’s just doing Gotham food,'” he says.

There’s an emphasis on pastas, which are all made in-house, and they’re milling their own grains and baking all of their breads in-house with a steam oven. He’s also aiming to put unfamiliar twists on common dishes, such as blue corn polenta and short rib carpaccio.

Still, Portale is cooking with his longtime regulars in mind, but hoping that they’ll be excited bout what he has to offer, even if it’s new and not yet familiar. At least the restaurant’s not too far away from their familiar haunt.

“I’m truly expecting every one of them to come here. And while I am trying to create something a little bit more casual, more fun if you will, less formal, simpler service — you know, the music might be a little jarring to some people — but I’ve kept it in my mind that I want Misses Schwartz, who’s 75 years old and has been to Gotham 300 times, I want her to be comfortable in the room,” he says. “I’ve been very, very conscious of striking a balance that everybody will feel comfortable.”

“Also,” he adds, “I just think the food is going to be very precise.”