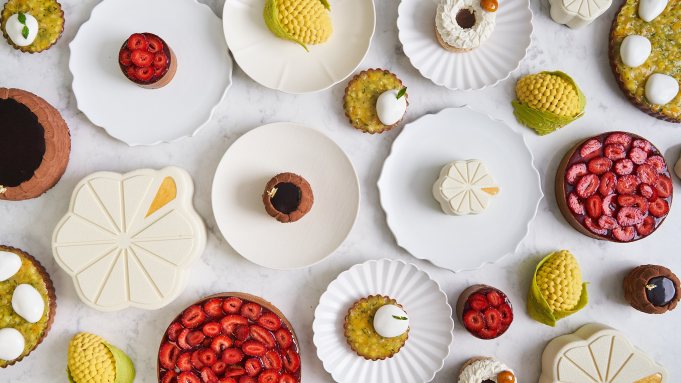 It feels like a trick question — it’s hard to imagine anyone answering “no” in the presence of pastry chef Eunji Lee. The chef is offering a tour of her ambitious solo pastry project Lysée, located in a bilevel space in New York’s Flatiron. The kitchen is calm and sweetly scented a few days before opening.

Lee was formerly the executive pastry chef at the two Michelin-starred restaurant Jungsik, where she worked for several years after a decade in France. She met her husband and fellow pastry chef Matthieu Lobry while working in the kitchen at Le Meurice; Lobry recently moved to New York to join Lee as a partner in Lysée. An affinity for Flatiron’s dining scene led her to want to establish her own roots in the neighborhood.

The project is backed by Hand Hospitality, which operates a constellation of Korean restaurants like Atomix and Jua nearby.

Lysée is a portmanteau of Lee’s name and the French word for museum. Lee imagined the project as a hallowed space for the art of pastry, a place where the concept of a bakery is elevated to that of a museum or gallery.

“Pastry is edible art to me, and that’s why I became a pastry chef; I love art,” says Lee. “Pastry looks beautiful, but you can also eat it.”

The space is situated so that the takeaway counter is upstairs, a reference to the experience of ascending the main staircase at an institution like the Metropolitan Museum of Art or MoMA.

“My concept was a museum or gallery. So when you go to the museum or gallery, you don’t mind going upstairs,” she says. “And at the end, you stop by a cafe or a souvenir shop. So that was the idea.”

Lysée reflects Lee’s Korean heritage, identity as a New Yorker, and French culinary training. Offerings include a signature cake with Korean toasted brown rice mousse, molded in Lysée’s emblem; a corn mousse cake; strawberry tart, and loafs like carrot cake topped with carrot and pecan chips and a yuzu cake. A shortbread cookie will rotate flavors monthly to reflect what produce is in season; the opening flavor is toasted buckwheat.

The design concept was Korean culture meets New York, blending traditional and modern elements. Customers are welcomed into the serene space by a walkway flanked by pebbles; the lower-level dining room, off to the right, is dedicated to table service, with a chef’s counter set up for future demonstrations and chef collaborations. Upstairs, the “dessert gallery” features pastries displayed along the walls and on a central thin table display. A counter offers takeaway and coffee service in collaboration with Coffee Project, as well as Lysée-bottled drinks like toasted brown rice infused milk, and herbed calamansi juice.

The space features two signature materials: Pocheon, white granite from Korea, and wooden pillars from old Korean houses. A large window upstairs overlooks the street; when the team stripped it to be painted, they discovered an old wooden frame, which matched the wooden beams throughout the space and spoke to the Korea-New York synergy. Downstairs, a traditional Korean greeting bell hangs in the window (Lee modified it to be silent).

“This is all me,” says Lee of crafting the space to reflect her personal story. “And I put all my energy and love in it.”

North Fork Hotel The Shoals Roots Itself to the Waterfront

Christopher Kane Has No Expectations When It Comes to Creating Art