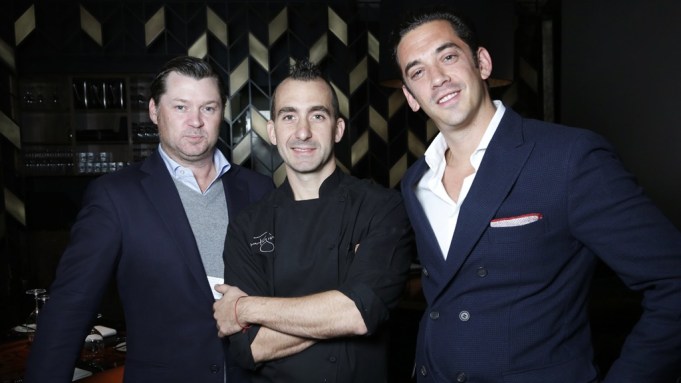 The chef teamed with John Meadow and Curt Huegel, principals from LDV Hospitality (the group behind No. 8, Scarpetta, Veritas, La Promenade and others) to open an outpost on the Atlantic City boardwalk in April 2012. Now they have brought American Cut to New York. Opened Friday, it’s the third Manhattan restaurant from Forgione, whose namesake eatery opened in 2008 and whose second, Khe-Yo, a Laotian spot, was unveiled earlier this summer. All three are located within the same five-block radius. “We weren’t looking to do American Cut in TriBeCa specifically. It just kind of happened,” Meadow says.

“I came here four years ago when it was still Trattoria Cinque [the restaurant that occupied the lot previously] and I looked at my girl and said, ‘God, this is such a great space,’” Forgione says.

The project took nearly a decade. Meadow and Huegel have had their sights set on the idea since they met in 2003. “We’ve always wanted to do a steak house concept,” Huegel says, noting it rounds out their roster of culinary ventures. The pair enlisted Forgione in August 2011. “By that fall, we were looking for spaces and brainstorming,” Meadow says.

The menu-planning brainstorming process ended up being a collaborative effort among the three. “The first menu was very chef-driven, almost egotistical. Like, how crazy can I get with meat?” Forgione concedes. “I think I scared the sh-t out of them.”

One of Forgione’s first pitches, lamb’s tongue tzatziki sauce, did just that. The mere mention of it is met simultaneously with groans and nervous laughter. Needless to say, the dish didn’t make the final cut.

“You have to understand that it was so exciting for me to be like ‘What can I come up with?’ I sent that first menu to my dad and he did the whole ‘We need to talk’ kind of thing,” Forgione says of his father, legendary New York locavore Larry Forgione. “He was, like, ‘What are you doing?’

Ultimately, they got back to the fundamentals. “I ate at many, many steak houses in New York just to get a feel for what was out there and what disappointed me most were the staples: Caesar salad, shrimp cocktail, crab cakes, spinach, mashed potatoes. The things that every single steak house has, I didn’t see anybody that was doing them really well,” Forgione says. “Everybody’s kind of just taken the martini glass, put some cocktail sauce in and thrown the shrimp in there. These dishes need some love.”

The signatures are all here and elevated, though the lineup is not your run-of-the-mill steak house fare. A delicate piece of hiramasa is served in a pool of miso dashi and topped with a dainty dab of wild American caviar and strands of fried ginger. The steak itself is dusted with an assortment of spices so when seared, a charred crust congeals all the flavors of the seasoning. The chili lobster, a kicky dish that’s become something of a Forgione signature, is fiery yet buttery. It’s served in an aromatic vessel with Texas toast to mop up the tasty broth.

Gooey treats from pastry chef Tara Glick cap off the meal. The fluffy pumpkin mascarpone cheesecake, topped with a hearty scoop of spice gelée and a sliver of pepita brittle, is a standout.

“We’re doing something ingredient-driven with respect for the product and respect for the technique,” Forgione says. “We did the work. I tasted every single steak you can imagine. Age 21, 28, 35, prime, choice, you name it. I’ve had so many kinds of steak in the last two years.”

Not a bad way to do research.