On Oct. 28, New York-based chef Marcus Samuelsson will release his newest cookbook, “The Red Rooster Cookbook: The Story of Food and Hustle in Harlem.” WWD caught up with the chef to find out more about the book and preview one of the recipes.

WWD: Why did you decide to put this cookbook together and why now?
Marcus Samuelsson: Almost from Day One, I realized that Red Rooster needed to have a cookbook. There have been so many incredible moments — from our opening in Harlem to President Obama coming in to dine to every time the community turns out to hear the music — I wanted to share all of these. I wanted to show how Red Rooster is more than a restaurant, and what better way to do that than with a cookbook. As for why now: Well, I didn’t want to do it too soon. We really needed the five years. I started seriously thinking about it after two, but we still needed to age a bit. Five years is still too soon to be considered truly vintage, but we at least feel established.

WWD: How does this book differ from or expand upon the cookbooks that are already out?

M.S.: There’s a huge difference. It’s really a read. I think that April Reynolds truly dove into Rooster and lived with the Rooster staff. The cookbook is about me setting the table with recipes, but it’s really the staff and the customers and the stories that make this cookbook what it is. It’s more than a cookbook — it explains the unique village of Harlem and what it takes to set up a real community here. It’s a story about the relationship between a community and a restaurant. The cookbook clearly defines its location, the characters and the tone of this place and time. We have Lana Turner, Thelma Golden and Hilton Als all writing chapters. These people can explain the story even better than us. That’s what makes it completely different.

WWD: How long did it take you to compile and choose the recipes to include?
M.S.:  It was really hard to pick which recipes to cut from this cookbook. In the end, we kept ones that represented the first five years really well. Every recipe, from the Whole Fried Yardbird to the short ribs we made when Obama came, show the history and the story of the restaurant. If you read the book and you’ve never been, you should be able to understand Rooster and its context in Harlem after you’re done. And if you have been, you can think, “Oh I remember when I had that,” and you’ll be reminded of the art and the music from that night and inspired to re-create the recipe at home. I would say the vision of the cookbook started three years ago with Bobby Fisher’s images. He really did an amazing job in helping this cookbook become what it is.

WWD: Do you have a favorite recipe from the book, or one that holds particular meaning?
M.S.: No! I can’t pick. I love each chapter. The thing I love most about this book is the word “hustle.” We fought really hard to keep hustle in the title and on the cover because that’s the word that really encompasses what it takes to open a restaurant and stay open. Hustle is what it takes to create something  iconic. We wanted the restaurant to feel vintage because this community feels vintage and it’s really about the community.

WWD: How has the dining scene in Harlem changed since you opened Red Rooster?
M.S.: There are so many new restaurants that have opened, which is fantastic. Each one has added to the legacy of Charles’ Pan Fried Chicken and Sylvia’s. What has changed is the diversity of what’s being offered. We have Mexican in Harlem. We have sushi in Harlem. Cuban restaurants are in Harlem. Higher-end restaurants like Mountain Bird and The Cecil have come to Harlem as well. We’ve opened another location here with Streetbird Rotisserie. Rooster has played a part in bringing in this diversity, as has Harlem EatUp!, our local food festival that just had its successful second year. It’s all about celebrating the diversity of the restaurants and supporting each other. Restaurants play a big role in job creation and that’s huge in any community. 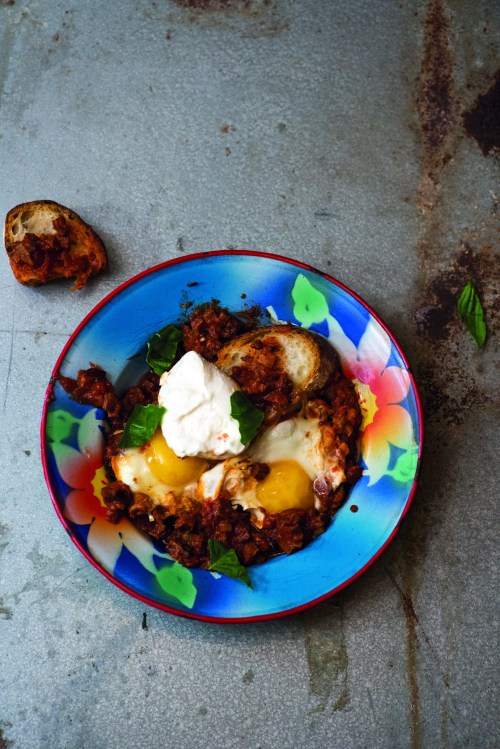 Tomatoes, celery, capers, horseradish—these ingredients remind me of a Bloody Mary. And that would not be a bad choice to accompany these eggs.

Directions:
Heat the olive oil in a large cast-iron skillet over medium heat. Add the chorizo, onion, celery, and garlic and cook, stirring occasionally, until the onion starts to soften, about five minutes. Stir in the tomatoes, capers, olives, chipotle, and water and bring to a simmer. Simmer until the sauce is thick, five to seven minutes. Stir in the horseradish and season with salt and pepper.

Crack each egg into the sauce and cook until the whites are set, five to six minutes.

Put a piece of toast on each of four plates. Spoon two eggs onto each piece of toast, and divide any sauce left in the skillet. Top the eggs with burrata if using, drizzle with extra-virgin olive oil, tear the basil leaves and drop on top, and serve.