Feast for the Eye: Chef Matthew Lightner Forages Against the Machine at Atera

The new Tribeca eatery helmed by the Portland transplant aims to keep things cozy and handcrafted. 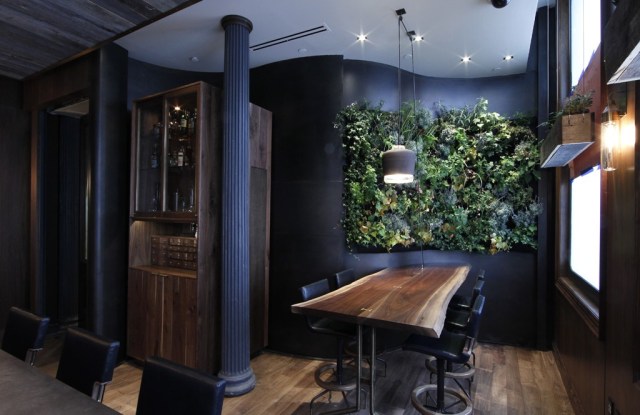 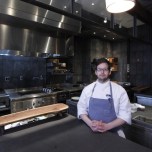 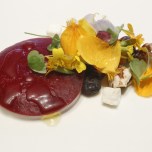 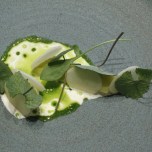 Opening today, Atera, the newest culinary addition to New York’s TriBeCa neighborhood, is an exercise in exclusive, intimate and above all unique dining. The soothing boîte is accessed through two 100-year-old salvaged cedarwood doors and features a 12-seat, reservation-only dining bar that encircles the massive open kitchen like a stage. A vertical garden called a “living wall,” which hosts local herbs and plants such as jasmine, rosemary, ivy and mint, arches over a five-seat reclaimed walnut slab in the far corner. There is a greenhouse in the basement.

The restaurant’s interior is the creation of Jeremy Levitt and Andrew Cohen of Parts and Labor Design, who relied on furniture and tableware created by local artisans and small businesses committed to sustainable ingredients (the brass legs of the wood table are made by metal worker Ariel Demarchi; the restaurant’s slate-colored ceiling is composed of barn siding from a house in upstate New York; the slates on its east wall are from the roof of an agrarian structure on a farm in Pennsylvania). Every texture shows the hands that touched it. “The expression of [the restaurant] is super subtle, but the complexity of what’s actually happening?” Levitt says. “It’s like Matt’s dishes. It’s all about Matt. You’re looking at how all these little elements come together to create something mind-blowing.”

“Matt” is executive chef Matthew Lightner, winner of Food & Wine’s 2010 best new chef honor and a James Beard Foundation rising star chef semifinalist in 2011 and 2010. Lightner relocated from the acclaimed Castagna restaurant in Portland, Ore., to helm Atera, and the stagelike setup for the kitchen is no accident. “The dishes that you get are so complex,” Cohen says in a respectful whisper, as Lightner puts the finishing touches on a plate. “To sit and watch them arranged is so theatrical.”

Lightner, whose left forearm holds a tattoo of a pig with the primal cuts outlined, combined his passion for foraging and progressive American dining to develop the rotating nightly 10-course tasting menu, which runs $150 a head (and an additional $90 for beverage pairings). Though the menu boasts vegetable-heavy dishes such as “grilled leeks, wheatgrass, raw apple and leek ash,” he’s looking forward to being able to use different cuts of meat and whole animals in a modern way.

“What we’re trying to do is to be able to be sensitive to the seasons, to what’s going on around us, and to put that here, to create a place and a feeling that’s more than just food and beverage,” the chef says.
Not everyone will have the same dining experience, as Lightner creates plates as the mood strikes. This promises to “keep everyone on their toes a little bit,” he laughs.

As for the foraging, Lightner has no intention of crawling around TriBeCa’s streets looking for comestibles.

“Foraging is about utilizing indigenous and unique ingredients,” the chef explains. “You have to get out into the wilderness, either to find a patch of wild violets that come out this time of year or lily bulbs, things like that. The fun for us is the adventure of it: getting out and going on these beautiful hikes and getting into nature and being able to bring that presence here. So that when you eat it’s not traditional or contrived, you get an experience of a feeling and a place.”

Lightner gazes at his kitchen from a seat at the bar before continuing.

“It’s a calming place,” he says. “We’re so new, but we’re starting this narrative about who we are and what our mission is — we want people to come here and feel part of something more than a dining experience, part of a cycle.”