Chef Michael Anthony serves up seasonal cooking and local fare at Untitled, the official eatery of the new Whitney Museum. 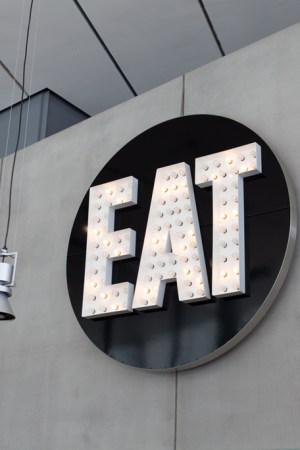 There are many facets of the Whitney Museum’s move downtown that are noteworthy. There’s the Renzo Piano-designed facade, the fact that more of the museum’s permanent collection will see the light of day and the realization that Manhattan’s Meatpacking District has officially been commandeered by the Establishment. On a recent sunny morning, though, with light streaming past the High Line and into the glass jewel box, most of the buzz was taking place inside Untitled, the official eatery of the new Whitney. Helmed by Gramercy Tavern chef Michael Anthony, the restaurant was crawling with front and back of house employees training for opening day on May 1st. Anthony himself was busy instilling his sense of service into the team.

“Not only is it a rare event that a cultural institution like the Whitney will move its home, but it’s moving downtown, and with that comes the feeling of very friendly openness,” Anthony says. “They want the museum to feel accessible and approachable.” It’s a concept that Anthony has taken to heart — and extended to his menu. “I hope people recognize that high-quality cooking and thoughtfully sourced food don’t have to be off-putting or insanely expensive,” he continues.

Untitled may bear the same name as the former restaurant at the uptown location, but the new iteration is a reimagination of the original Danny Meyer concept with an entirely different menu under Anthony’s lead. The food will draw inspiration from Anthony’s commitment to seasonal cooking, one of his signatures at Gramercy Tavern. Think charred beets with sugar snap peas and pea shoots, grilled monkfish with green and black garlic and cured fluke and radishes with trout roe. Ingredients will be sourced from the Union Square Greenmarket as well as directly from local farmers — there’s even someone on staff known as the “in-house forager.” The vegetable portion of Anthony’s menu lists such items as grilled leeks with chili citrus vinaigrette and roasted carrots with toasted peanuts. “They’re not really intended to act as side dishes, although I think some people will use them that way, because that’s just how we grew up and that’s fine,” he says. “I think they are the kind of dishes that will be creative enough to entice people to order them in the beginning, middle and maybe even end of a meal.” (This doctrine could also be viewed as marketing for his cookbook, “V is for Vegetables,” out in October.)

“We try not to be overbearing when it comes to our excitement about serving seasonal foods,” Anthony says. “For me it’s a nonnegotiable. If I can’t do it, then I won’t be cooking it.” Unlike at Gramercy Tavern, where those concepts are applied to a slightly masculine space with rustic appeal, Untitled features 30-foot ceilings, glass walls and an open kitchen that looks like a sleek sushi bar. Meticulous plating of each dish — demonstrated by chef de cuisine Suzanne Cupps — will reflect the surroundings. “We’re thinking about following the inspiration of those minimalist lines, as well as the landscape [of the High Line] itself. When I walk up there I see this groomed nature, to the way the plants have been organized, and yet they’re allowed to grow in this kind of wild nature,” Anthony says. “I think all of that is going to inspire the aesthetic of the food that appears on the menu.”

The stylized food will serve as the main form of decor in the space (“In no way are we attempting to try to compete with the artwork,” laughs Anthony), which features white oak tabletops, a stainless steel open kitchen, and red cushion chairs. The one piece of art that will be incorporated — taken directly from the uptown location — is a light-up Robert Indiana sign that appropriately blinks “EAT.”

As for how Anthony is adapting to his momentous new home, he’s both appreciative and in awe of his shift in work culture. “It’s a doctoral thesis on the restaurant business,” he says. “I feel like I went through my master’s program at Gramercy Tavern over the last eight years and now this is a new level of learning.”