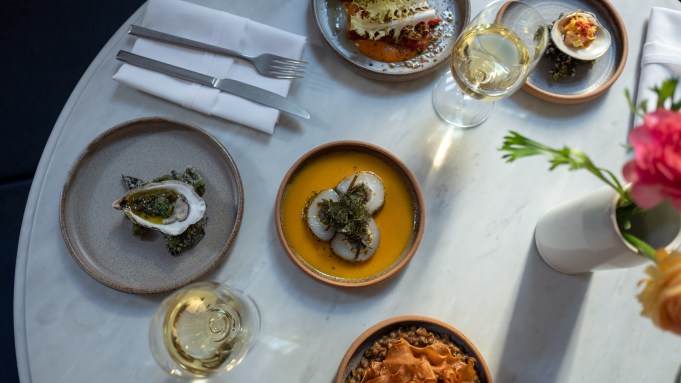 In early 2019, Victoria Blamey took over as the executive chef at famed Manhattan restaurant Gotham Bar and Grill. Despite some initial controversy — with longtime clientele, the restaurant wasn’t ripe for change — Blamey received a three-star hat-tip from New York Times critic Pete Wells. A few months later, in March 2020, the restaurant closed its doors in the early days of the pandemic.

Blamey, who had previously worked as executive chef for Chumley’s, followed up her short tenure at Gotham Bar and Grill with several chef-in-residence gigs. She took up residence at the Mayflower Inn and Spa in Connecticut, Fulgurances Laundromat in Brooklyn, and Blue Hill at Stone Barns in the Hudson Valley. Blamey was at the acclaimed farm-to-table restaurant when she was approached by a partner of the space at 28 Cortlandt Alley in TriBeCa with the opportunity to open her own restaurant. The project that had initially been slated to open in the space had fallen through.

She got into the kitchen at Mena at the beginning of September. There are no dishes born from necessity and clientele expectations — “I don’t have to keep things that have been on a menu for X amount of years,” she says — and Blamey is instead focused on building a menu and space that reflect her culinary interests and background. The prix fixe menu taps into her Chilean heritage, focusing on seafood and vegetables. “Things that are dearer to me,” she says. “Putting a little more emphasis on the things that some people think might be esoteric.”

“It’s about health, it’s about climate change, all of those things are important right now because the world is changing and we have to change with that,” says Blamey of her approach, noting shifts in dining habits (smaller portions) and a trend toward conscientious eating.

At Mena, responsibly farmed seafood is a focus. The pandemic has also made certain ingredients, like quail, harder to source as small, local farmers face challenges; the impact trickles upward. “Chefs have to understand that times are changing, and you gotta change with them. We need to have some sort of social responsibility on how to influence the clientele and the people that go to restaurants.”

The restaurant, tucked on the quaint Cortlandt Alley, is named after her great aunt, Filomena, who raised her mother and influenced Blamey. Cycle Projects designed the 50-seat dining room with a natural and airy aesthetic in mind; the idea was to create a highly personal space with “an organic spirit,” says Blamey. The space is accessorized with photography and ceramics that nod to Blamey’s South American background and culinary experience in New York.

“There’s got to be a cohesiveness with the food and the people we work with,” she adds. “It becomes very personal.”