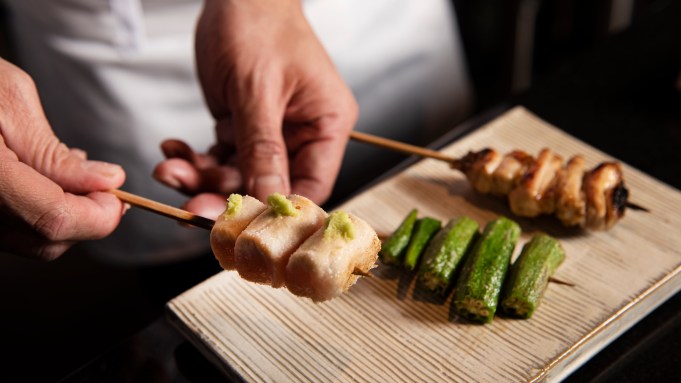 One day ahead of Torien’s opening, Tokyo-based chef Yoshiteru Ikegawa was seated at one of the 16 counter seats bordering the intimate restaurant’s open kitchen, watching head chef Yoshiteru Maekawa and his team work. While the frenzy of many restaurant kitchens counters the environment being cultivated in the main dining room, at Torien, the ambience is the kitchen. The walls of the restaurant are painted pitch black and the design is minimal and wooden; there’s nowhere to look but at the theater of the cuisine.

Maekawa, who Ikegawa describes as passionate and flexible, studied under the chef in Tokyo at his Michelin-starred and high-demand yakitori restaurant Torishiki for the past three years; Ikegawa was in New York to cook alongside his student-turned-proxy for the first three days of the restaurant’s opening. Being selected to head up the kitchen is a particularly salient honor: Torien marks Ikegawa’s first project outside of Tokyo, a partnership with Showa Hospitality. Although chef Ikegawa’s high profile means that he’s received many offers all over the world, he was drawn to the synergy he felt with Showa cofounder Edo Kobayashi, who dined at Torishiki several times while courting him to team up for a project Stateside.

Torien is located on an unassuming stretch of Elizabeth Street, just north of Houston Street in downtown Manhattan. Guests are greeted by a bed of small stones in the entryway before stepping up into the transportative dining room, designed by Oyamatsu Design Studio. While the chef’s counter is the focus, there are also two private tables located in a back room, aimed to accommodate business dinners.

While New York has scores of sushi restaurants, many of which are revered and of comparable quality to the best ones in Japan — yakitori is still relatively untapped territory; you’re most likely to happen upon a restaurant that veers more barbecue. At Torien, there’s an emphasis on how fire is being used to cook the food, and the skewers are constructed to optimize how they hit the heat generated from the charcoal. They’re cooking using kishu binchotan that’s a mix of six charcoals, including one that’s so high end that you can’t get it anymore in Japan; they’re the first to use it outside of Japan and the last restaurant in the world to get it. The charcoals are slow burning and lend a unique scent to the flavor of what’s being cooked.

Sourcing ingredients has been challenging, although Ikegawa has been impressed by the quality of produce and meat available, and is collaborating with the farms in order to get the specific items he needs. A major difference between the approach in Tokyo and the U.S. comes down to specificity: yakitori is not just a catch-all for barbecued chicken. While separating the various parts of the chicken — skin, neck, breat, thigh, gizzard — is standard for yakitori in Japan, in New York the categories, even when specific, are more broad. “A wing is a wing here,” says Ikegawa through a translator; at Torien, the wing is separated into three parts.

The restaurant serves only a 14-course omakase menu, with skewer and course offerings changing daily. In addition to the various chicken cuts — chicken neck skin, chicken shoulder and thigh — they’re also serving duck breast, as well as lighter fare such as pickled seasonal vegetables, okra, zucchini. A new dish they’re introducing for New York is a half portion of ramen, which is served as the final course.

The restaurant’s beverage program is headed by Akio Matsumoto, who joins Torien from L’Effervescence in Tokyo. A curated list of sake as well as cocktails, wine and beer will be offered.

“Yakitori’s one of Japan’s dearest food cultures, but still not many people know about yakitori [outside of Japan],” Ikegawa adds. He hopes that Torien will help pave the way.

Ernesto’s Bringing Basque Cuisine to the Lower East Side