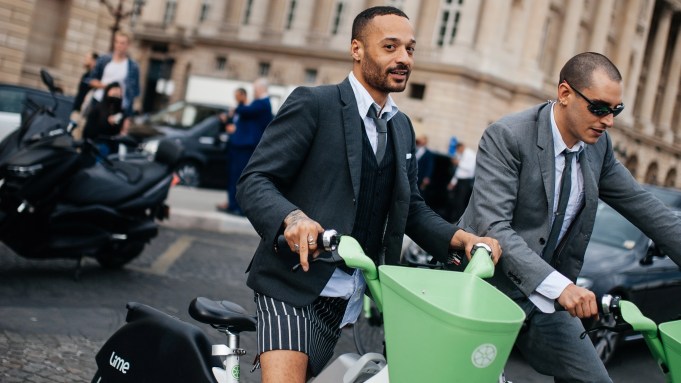 Urban regeneration programs across key European cities such as London, Paris, Milan and Amsterdam are mostly designed with the goal to reduce traffic and encourage residents to walk and cycle to their destinations.

London alone plans to add to and increase the number of cycle lanes in the near future to better connect regenerating residential areas like Wembley, Tottenham Hale, Isle of Dogs, Greenwich and Brentford to the city center.

A slew of bicycle manufacturers and cycling-gear makers are booming because of the rising demand, and e-bikes in particular have become a popular option for commuters looking to strengthen their health while beating traffic.

There are many options with prices as low as 499 pounds for a foldable e-bike from Argos, which could work if you don’t mind a freakishly giant battery hanging between your legs, to mountain-trail ready, monstrous-looking ones retailing for around 7,000 pounds from Evans Cycles in London.

The average price for a decent e-bike is still relatively high, ranging from around 1,500 to 3,000 pounds. The good news is that cities like Paris have introduced multiple incentives to make choosing an e-bike more accessible.

As part of French capital’s biking plan, some 180,000 additional bike parking spots will be added, and between now and 2026, Parisian riders will gain 180 kilometers of long-awaited and permanent bike lanes.

E-bike rental providers such as Lime, Uber’s Jump and Tiers are also making effortless and sustainable riding more accessible to millions across major cities in Europe and beyond.

Cycling may be on the rise — but sleek and chic options for the fashionably minded are slim.

Brompton is a popular choice. It can be packed into a small square and can be checked into a cloakroom at a party. There are also a many accessories to choose from — if you are going home from said party with a giant goodie bag, the messenger bag that attaches to the front will be perfect to fit all that stuff you might re-sell online later.

Powered by electricity, the Brompton e-bike overcomes one of the biggest flaws of its small-wheel nature — going uphill has never been so easy. (Anecdotally, I was once asked if I have competed in weight lifting as years of cycling on a Brompton have given me very strong thighs.)

If you don’t want to pay the premium for the electric version, which costs about twice as much as the normal one, you can sign up for the waiting list on Swytch. This British upstart sells e-bike conversion kits that promise to turn standard Brompton bikes, as well as others, into e-bikes at a lower cost.

Another contender is VanMoof. This Dutch e-bike maker has designed some of the most stylish models available on the market.

Loved by celebrities including Evan Mock and Frank Ocean, VanMoof bikes come with a very minimal and futuristic design with the battery hidden within the frame and buttons are nearly invisible. The company has also released one-off bikes in connection with Stephane Ashpool’s Pigalle, Jacquemus, and Highsnobiety, as well as content collaborations with Ganni in celebration of the Scandi brand’s store opening in Amsterdam.

Jonathan Hum, chief marketing officer at VanMoof, says the company, founded in 2009 by Taco and Ties Carlier, started with the mission to make the perfect city bike.

“Design has been the hallmark of the brand from the beginning, and it continues to be the key differentiator for us. We are fairly unique in the sense that we prioritize design whereas that maybe hasn’t been a priority for a lot of other brands up until this point in the space,” Hum says.

“It is not just from a form point of view, but also from a function point of view, such as these consumer-led design features, whether that’s the shape of the frame itself, or the integration of, like, a kick lock into the frame so you don’t have to lug a big heavy lock around with you,” he says.

The A5 and S5 are the least VanMoof models to hit the market. Both are manufactured in Taiwan.

“There’s a very deliberate consumer-focused design strategy. It’s not a men’s bike or a women’s bike. A5 is a bike that is aimed ostensibly at a slightly smaller rider, which makes them easier to jump on and off cycling around town, whereas the other bigger model S5 is a bit more of a cruiser with an emphasis on riding comfortably over longer distances,” Hum explains.

He believes that the company’s emphasis on design is what drew “an enviable list” of fashion and design brands that want to collaborate with VanMoof. “There’s a sense of recognition of that being important to us as it is to some of the other brands that maybe you wouldn’t ordinarily put us together with, but there’s a shared terrain with design,” Hum says.

E-bikes, which generally result in less sweating, open up a new lane for fashion possibilities in the summer. The layer game is a solid option for long-distance commuters. And both the Brompton and VanMoof A5 are ideal for those attending summer parties by the Seine during Fete de la Musique in maxidresses, as the lower top tube design allows riders to get on and off the bike more easily.

Remember to top your e-bike look off with a helmet — safety cannot be compromised in the name of fashion.