The Huailai Amethyst Manor vineyard and winery isn’t exactly world famous. Yet that’s clearly the image for which the brand is striving. 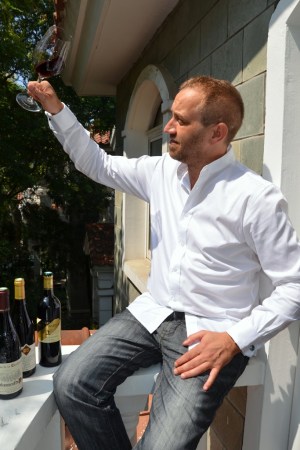 Hebei Province, CHINA — The Huailai Amethyst Manor vineyard and winery isn’t exactly world famous. Yet that’s clearly the image for which the brand is striving.

The tastefully crafted, muted brick multibuilding winery — surrounded by several fields of grapevines carefully selected from the best wine-growing regions of France, then transplanted here to northern China — sits just below the Great Wall, an hour north of Beijing, in the dusty terrain of Hebei. Inside the vineyard and winery are the best grapes available, top-end equipment imported from France and Italy, and aged oak barrels from the U.S., signed by the Chinese wine drinkers who have paid hundreds, or even thousands, of dollars for caskets of a drink unheard of outside the region. But one might pass by it on the expressway without noticing. Huailai Amethyst Manor produces hundreds of thousands of bottles of wine each year, according to its marketing directors, mainly sold under the label Danbian, a wine that seems to be available only in China.

It is the very expensive, and potentially lucrative, pet project of a group of local businesspeople in Hebei who spent millions on building the winery, choosing the grape strains and buying vats and other technology to make a European-grade wine. The gamble may be working, to some extent. Though the wine is unavailable outside of China, Danbian fetches a pretty penny domestically — especially for a product not generally rated among China’s top wines, but rather among locals who want to be seen as drinking expensive wines.

At the end of a tour of the vineyard and processing plants, Israeli wine expert and broker Yiftach Bar, who routinely imports some of the world’s best wines into China, asked for a sample of Danbian wine in Huailai’s tasting room. That, the staff told him, was impossible unless he pays 900 yuan, or $157, to uncork a bottle. As Bar laughed, the staff shuffled uncomfortably. The tasting room is only for high-end customers, it appeared, not for those who wander in for a glimpse at one of China’s newest obsessions — homegrown wine.

Bar, China-zone manager for the French distributor Distribution Internationale de Vins et Alcools, or DIVA, has explored countless such vineyards in his years in China. Though few have impressed him with their wine, he sees immense potential and a powerful drive to make good wine.

As China’s wine consumption has grown exponentially in the past 10 years, so, too, has its reach as a winemaker. International wine organizations estimate that 85 percent of all grape wine consumed in China is grown domestically, mostly in the tens of thousands of small vineyards and distilleries that have emerged in the past decade in places like the Hebei, Ningxia and Shandong provinces.

Wine has become an important status symbol for newly wealthy Chinese. Many are studying the art and the product, while many, many more are investing in it and looking to make money by making wine. So what’s the missing link to making great Chinese wine?

“Wine culture,” says Bar, who studied wine-making in France. “You have to localize the grapes, know the growing conditions. You need time, and you need a lot of patience. This industry is young. They will get there.”

Only a decade ago, much Chinese wine was virtually undrinkable, hardly a step removed from cooking vinegar. After all, Chinese had their own drink: baijiu, a high-octane grain alcohol essential at all official banquets and business meetings. And while baijiu hasn’t left the scene by any means, red wine in particular has begun joining it at the table.

“Most of my friends don’t even really like to drink baijiu, and red wine actually tastes quite lovely,” says Cynthia Wu, a 33-year-old legal assistant who lives in Beijing. “We can go for a glass of wine together or have it with dinner, but we would never drink Chinese alcohol so casually.”

The emergent Chinese wine consumer is not an isolated individual but a full-on trend.

According to a recent report from VineExpo/International Wine and Spirit Research, a global trade fair for wine sales in Asia, the region is the word driver in growth of wine consumption. The report notes that Chinese consumers typically drink 1 to 1.3 liters per capita of wine per year, compared with 20 liters per capita in the United States and 50 liters in France. Within three years, the figure is expected to rise to about two liters per capita in China — a massive increase in the world’s most populous country. Wine consumption has leveled off in Europe, meanwhile, and continues to grow fairly quickly in the United States, the association reports.

Another way of looking at it: The projected growth in China’s wine market from 2011 to 2015 is equal to one billion bottles of wine. Most of that increase in consumption is at the lower end of the spectrum, in cheaper, domestically made wines that still haven’t evolved much in taste or quality. Yet driven by investors and wine aficionados at the top, the high end of the market is changing quickly. With the proliferation of midlevel wineries like Amethyst, an emergent group of Chinese winemakers has started to attract international attention.

Yet for the serious wine investor and high-end wine drinker in China, there is no substitute for European quality. Which is why recent rumblings from a Chinese industry association that the EU is flooding China’s market with wine could potentially be so troubling. The news could lay the framework for a case from China at the WTO over imported wine from Europe, which eventually might spell higher prices and fewer imports, leaving the high-end wine market in China to the country’s domestic newcomers.

That’s problematic for Chinese wine consumers at the upper end, especially since tastes are quickly outpacing the development of great wine produced in China. No longer is a bottle of high-priced wine enough. More wine drinkers know what they want, and will pay to get it.

“Consumers are learning very, very fast,” said Martin Liu, who has worked in the high-end food and beverage industry for several years and has a small investment-grade wine collection of his own. “It’s no longer about the name only. It’s about the taste.”

And as China’s winemakers are scrambling to catch up with a centuries-old European tradition, some have taken a shortcut. Recent reports say several Chinese billionaires are buying, or trying to buy, famous wine châteaus in France, perhaps recognizing that wine culture, the essential, impalpable element that makes a great wine, can’t be made overnight in the plains of Hebei.