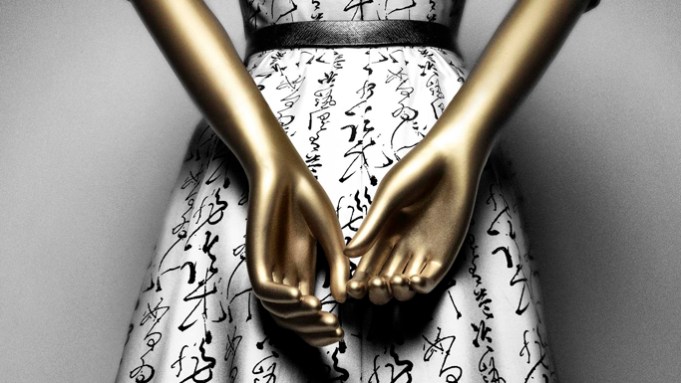 NEW YORK — Visitors heading to this spring’s “China: Through the Looking Glass” exhibition at the Metropolitan Museum of Art’s Costume Institute are in for a multisensory experience, and that all-immersive approach can also be found in the substantial vellum-leaved catalogue.

Depending where museumgoers’ interests lie, the People’s Republic might conjure up images of imperial robes, Mao suits or Shanghai street style, but Met’s take on China aims to be all-encompassing with a melange of fashion, film and art. In the catalogue, curator Andrew Bolton has turned to John Galliano for a question-and-answer about how China has influenced his work, as well as essays from filmmaker and the exhibition’s artistic director Wong Kar-wai; Harold Koda, and others. The 256-page tome includes 300 color illustrations and has a gold-stamped cover and a Chinese string binding. Platon provided the new photographs to bring to life on the printed page how Chinese art and film have influenced Western fashion designers since the early 1900s. The catalogue will be in stores in early May, with the Fifth Avenue museum selling 500 numbered copies of a limited-boxed edition that includes a Platon print geared for framing. The exhibition opens May 7 and will run through Aug. 16.

Bolton writes, “‘China: Through the Looking Glass’ is not about China per se, but about a China that exists as a collective fantasy. It is about cultural interaction, the circuits of exchange through which certain images and objects have migrated across geographic boundaries.”

Customers, who buy either version of the catalogue at the Met, will receive another reference to “China: Through the Looking Glass,” namely a scent strip of “Nuit de Chine,” the fragrance created in 1913 by Maurice Schaller for designer Paul Poiret. Enhancing the multidimensional effect is the fact that Poiret teamed up with the illustrator Georges Lepape for the design of the flacon, which was inspired by Chinese snuff bottles. Bolton plans to draw on that idea by displaying snuff bottles in what will be meant to resemble an opium den housed in the Chinese Galleries. There, Asian-inspired perfume flacons and ensembles from Poiret, Callot Soeurs, and Patou and clips of Chinese films portraying opium dens will be displayed in the Yahoo-sponsored show.

The original formula for Nuit de Chine has been preserved by the Osmotheque in Versailles in Paris, which the Met connected with to re-create the scent as a tie-in to the upcoming exhibition.

In light of Wai’s involvement, motion pictures also will be a pillar in “China: Through the Looking Glass,” including Hollywood films from the Thirties and Forties, especially those featuring Anna May Wong. In his interview in the catalogue, Galliano told Bolton that Wong appeared frequently in his scrapbooks and she was the primary source of inspiration for the spring and summer 1993 collection of his own brand. The designer also detailed his first trip to China in 2002, a three-week sojourn during which “we’d all trundle off to in my van, listening to pre-Communist music, driving through a landscape that didn’t seem to have changed for hundreds of years…You get so electrified from one of those trips that you don’t know what is going to surface when you get back home.”

Galliano’s spring and summer 2003 haute couture collection for Dior sprang from that trip. (He later flew in a dozen Shaolin monks to Paris to twirl swords on his Paris runway and also installed a troupe of Chinese acrobats.) During that first trip to China, Galliano said he realized that his creative process was his meditation. “The house could burn down and I’d not be aware of it, I’m so focused on my work.”