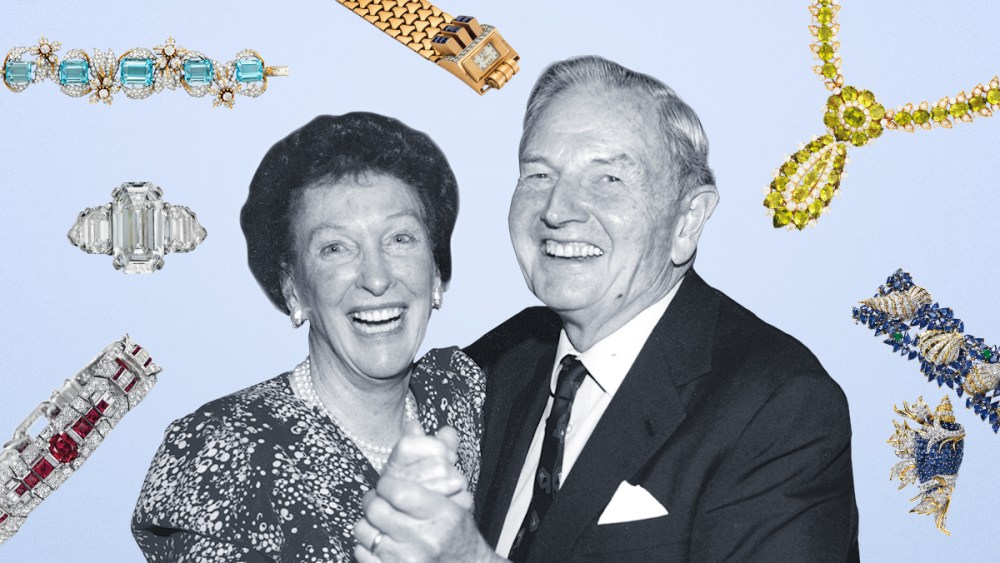 “These were precious, but they were meant to be part of their lives,” explains Daphne Lingon, Christie’s international jewelry specialist, of pieces from the estate of David and Peggy Rockefeller. “It speaks to how they lived with their collection and how they viewed collecting.”

Heralded as the sale of the century, the Rockefeller estate — boasting art from Picasso, Gauguin and Monet, among hundreds of other lots — hits the auction block next month in New York with a total estimate of nearly $1 billion. While most lots — including the art — will be offered in May, jewelry belonging to the late couple will be sold as part of the auction house’s June 12 “Magnificent Jewels” sale, with proceeds from the entire estate going to 12 charities chosen by the family.

Exquisite in craftsmanship and design, the jewelry illustrates the intimate relationship the Rockefellers had with their objets d’art. David Rockefeller, who died last year at age 101, very much enjoyed giving jewelry to his wife, who died in 1996.

Ariana Rockefeller, a granddaughter of the couple, explains, “It was a great pleasure for him to get my grandmother beautiful jewelry — and not just because it was flashy.”

The pieces — 19 in total — will make their public debut Thursday evening at a private reception at Christie’s in Los Angeles and will include the 5-carat diamond ring given to the-then Peggy McGrath by David Rockefeller during their 1940 engagement. Estimated at $120,000, the platinum ring was made by jeweler Raymond Yard, a favorite of the family’s beginning with David’s father, John D. Rockefeller Jr.

“This is the start of them as a married couple,” Lingon continues. “This [ring] begins their journey in collecting together.”

Lingon describes Rockefeller as “very much a loyal client of Raymond Yard” who would often look to the jeweler for advice on purchases from other designers. As was the case with Rockefeller’s entire collection, the family’s jewelry was purchased not because of an anticipated appreciation in value or adherence to trends, but solely out of personal delight.

“My grandparents always said to get pieces you’re drawn to,” continues the 35-year-old Rockefeller, who has begun her own “small collection” of contemporary drawings and photographs. “They really let themselves free to be drawn to things they found beautiful or intriguing. Their style is incredibly eclectic and they trusted their instincts.”

Rockefeller, a fashion designer and equestrian who created a limited-edition handbag for the Longines Masters later this month in New York, recalls the simplicity with which her late grandmother wore jewelry on a regular basis. “Day-to-day maybe she had on a pair of pearl earrings and a simple wedding band,” continues the daughter of David Rockefeller, Jr. “She could go to a black-tie gala and wear jewels from my grandfather or passed down from my grandfather’s mother [Abby Aldrich Rockefeller] or be just as comfortable in blue jeans and a pair of stud earrings while working with the cattle on their farm.”

While in her daily life Peggy Rockefeller exhibited restrained taste; she often wore a weighty suite of chartreuse peridot and diamonds by Van Cleef & Arpels from the mid-Sixties to gala dinners. “It was clearly something personal to her,” says Lingon of the five-piece set, which is estimated to bring in $120,000.

Lingon notes the Rockefeller jewelry boasts “quite a bit of color,” with certain pieces firmly reflecting the period in which they were made. For instance, a 14-karat rose gold Cartier watch from the Forties is “very indicative” of the period when platinum was rationed because of World War II.

“You also see the use of small colored stones or amethyst and citrine instead of these precious stones,” adds Lingon of the timepiece, estimated at $18,000. “Then when you transition to the 1950s you see the return of platinum and diamonds like the Schlumberger [bracelets] with such dimension and color.”

The whimsical works were made by French jeweler Jean Schlumberger for Tiffany & Co. in the late Fifties. One boasts a dense band of pear-shaped sapphires and circular-cut emeralds beneath a set of diamond-encrusted gold seashells. Another, also by Schlumberger for Tiffany, features a series of five rectangular aquamarines surrounded by gold and diamond flowers and leaves mounted in 18-karat gold and platinum.

“I think about how the Rockefeller family gave so much to the American people in terms of land and parks,” says Lingon of David and Peggy Rockefeller’s dedicated conservationist efforts. “Perhaps pieces of land by the sea may have inspired these purchases.”

It’s from David Rockefeller’s own seaside escape at Seal Harbor, Maine, that Ariana Rockefeller has some of her fondest memories of her grandparents and their prized collection. “Everything has this incredible nostalgia because it was so woven into their daily life,” continues the Rockefeller scion. “This sale will be a wonderful testament to my grandparents’ legacy and philanthropic vision.”