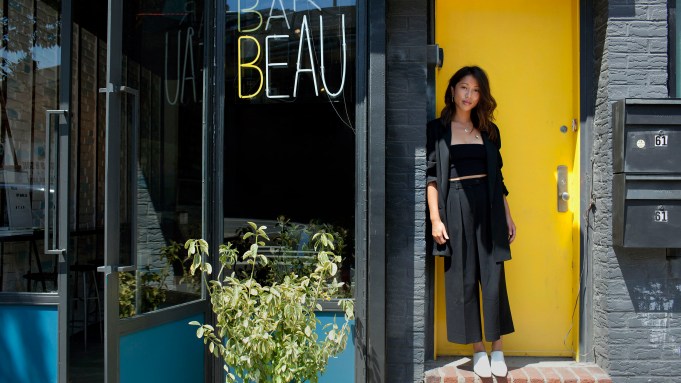 Any restaurateur will tell you that opening their first place is akin to having a child. And, as Claire Chan can attest, it doesn’t get any simpler when it comes to thinking about baby number two.

Four years after opening her West Village coffee shop and cafe The Elk, Chan presents her second effort, a bar/restaurant concept in the Williamsburg section of Brooklyn, N.Y., called Bar Beau, named for her nephew in Vancouver. The former Bergdorf’s buyer, who left behind the fashion world to follow her lifelong passion in food, fell for the neighborhood’s evolving nature and stellar food scene.

“They are just kind of raising the bar [with the food scene] and I wanted to be a part of that,” she says, over the rattle of a cocktail shaker in the background at Beau, which opened last month. “And then just the people, the demographic — a lot of young people, a lot of creatives, a lot of different stories, of people coming in and out. And it’s a changing neighborhood, too, so I found that very intriguing.”

She cites neighbors Llama Inn and Lilia as benchmarks of the food scene that inspired her to make the jump to Brooklyn for her second endeavour.

Chan, a native of Vancouver, began her life in New York in the fashion industry, first in 2009 in school and later as a buyer for Bergdorf Goodman.

“That was such a passion of mine for a while,” she says of the industry. “And I love fashion and I loved working in fashion, but I’ve always had this sort of weird call to be involved in food and hospitality. Even from a young age: my dad would tell me that I would fold down his bed sheets and write a note and leave a little mint.”

She had worked in restaurants at home in Vancouver and through university, and knew it was a world she wanted to embrace.

“I think for me what I brought from fashion is an appreciation for the finer details that really enhance,” she says. “In fashion it’s the store experience, the customer service, the fabric, the lighting, the music and everything between. The product is the product, and that’s always how it’s going to be. I think that appreciation for banding and the 360 view is where I see the parallel [with food].”

After debating expanding The Elk into new locations, she ultimately felt eager to try a new concept.

“I started to think about what was my next step…was it expanding and opening more Elks? Was is coffee? Was it starting to roast my own? So I did a lot of internal digging about what makes me inspired and what gets me going and I came to creating — creating experiences and feelings,” she says. “I know that’s vague, but that’s ultimately what I think this place and The Elk have in common: creating a very thoughtful and authentic experience for the guests. With cocktails and food, I approached that the same way that I did with coffee, which is learning as much as I can about it, getting great people to help who are experts in those fields along the way, and creating a type of offering that I am proud of.”