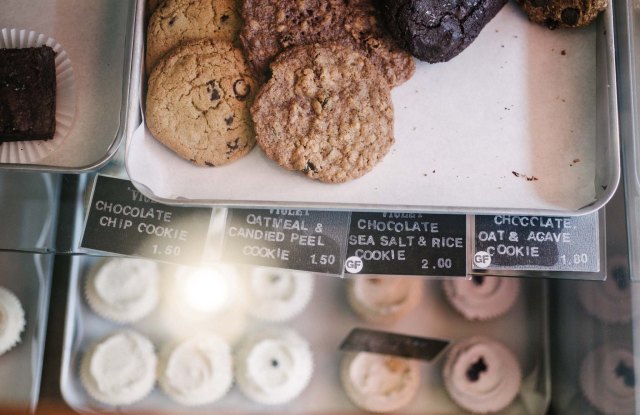 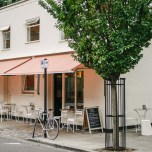 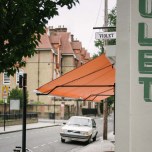 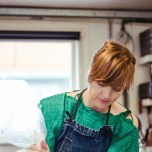 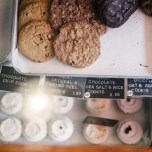 Claire Ptak never wanted to open a bakery. She knew the restaurant industry was a fickle one, but a childhood consumed by baking with her mother and grandmother eventually led to her popular Violet Bakery in East London, and now, “The Violet Bakery Cookbook,” which drops in the U.S. on Tuesday.

Little did she know that her “experiment cakes” as a child would lead to her career. “My mom used to let us throw everything that we wanted into a bowl and bake it,” says the California native. “It was pretty disgusting, but it was cool because she let us be really creative and not be afraid. We just used our taste buds and figured out.”

It was that gumption that allowed her to pursue a career in baking full throttle, first at a local café in Point Reyes, Calif., then at a dude ranch in Wyoming. “I think I had a lot of confidence in what I was doing, so I always applied for jobs like that,” she says. “I just was, like, I can do it. I think I was 17 and I was baking for this whole ranch — like 100 guests. I loved it.”

After a brief stint in Hollywood assisting a director, Ptak met a pastry chef at Chez Panisse — “because I went to listen to him talk about apple varietals” — which led to an internship and eventually a job. For the interview, she made wild huckleberry tartlets with rose geranium cream, which apparently impressed Alice Waters. “I was constantly learning from the way she tasted and chose,” says Ptak of the organic-cooking pioneer. “It’s kind of an amazing way to work because she’s brutally honest, but you really start to learn what are the things that she’s looking for.”

After three years training under the venerable chef, Ptak bit the bullet on a long-distance relationship, married and moved to London. Between food styling — for the likes of British Vogue, Jamie Oliver and Nigella Lawson — and food writing to support herself, she opened a bakery stall at the newly revived Broadway Market in 2005. “At first, it was so cold and wet and nobody came because nobody knew about it, so it was really challenging in the beginning,” she says. “But we stuck it out, and it’s a really remarkable success story. Now I think we have like 10,000 people there every Saturday.”

Still, cooking from home and transporting her goodies every weekend was a self-described nightmare. In her hunt for a commercial kitchen space, she stumbled across a light-filled, stucco shop — the type of building that might be found in her home state. “It was so unusual for London, and it needed a lot of work,” she says. “But it was so close to the stall that we decided to open a café.”

Since opening in 2010, Violet Bakery’s popularity has surged, counting designers Christopher Kane, Simone Rocha and Erdem Moralioglu as regular customers. “I think there was definitely a gap in the market for American baking. At the time, a lot of it was either really overdecorated and grand or it was really tasty but not really very attractive,” says Ptak. “I thought I could do something in between, which was a home-baked, accessible kind of cake, but a bit prettier and something you would want to give as a gift. The aesthetic was really important to me.”

Which is likely why Violet has charmed the fashion world. Ptak has baked for brands like Edun, Stella McCartney, Christian Louboutin, Jimmy Choo and more. “I did actually for a little while trade cakes for clothes,” she admits. “It’s totally dangerous. My accountants made me stop doing that.”

Despite Californian influences, the English tradition of cake at tea at 4 o’clock dictates some of the menu: carrot cake, rum and chocolate cake with salted caramel icing, lemon drizzle cake and a simple banana bread are some of her most popular creations. (Ptak’s personal favorite at the moment is agave cookies made with oat flour.) Her American roots show most prevalent in the ingredients and sourcing — not always easy on a rainy, windy island. Fortunately, small dairy producers who wouldn’t have driven out of their way five years ago now have a handful of restaurants in Hackney — including Raw Duck and The Marksman — that make the trip worthwhile. Stone fruit is shipped from nearby France and Italy, while cured hams — for quiches and other savory items — come from Spain. “I think it’s hard to make a mediocre ingredient taste good. Definitely at Chez Panisse that was ingrained in me there,” says Ptak. “You just try to make that ingredient the best it can be. So you’re pulling out all the great flavors of that one thing rather than trying to mask it or disguise it.”

The same theory is applied to the recipes in her cookbook, which is organized from morning to night, with items like sweet potato, coconut, date and rye muffins, coconut cream trifle cake and rhubarb galette. Says Ptak, “It’s just simplicity.”