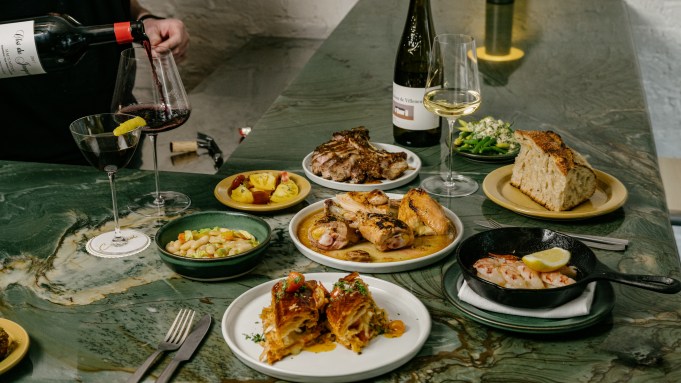 Claud, four-plus years in the making, is finally set to open its doors in the East Village. The restaurant is a collaboration between former Momofuku chef de cuisine Josh Pinsky and wine director Chase Sinzer, who met while working together at David Chang’s restaurant group in 2014.

“After working together for a year, we just kind of stayed in touch, talked about food, drank beer, drank wine, ate food,” says Pinsky. Several years ago, shortly before Sinzer moved to L.A. for a short stint, the pair began discussing the idea of opening their own restaurant. “We were pretty close to signing a lease for a space in the Lower East Side the week before the pandemic hit,” adds Pinsky. “And then the world happened.”

The pandemic meant that the pair had more time to fine-tune their concept, and landed in a restaurant space in the East Village not far from where they met — a central location for dining that’s accessible to various demographics and level of diners.

Pinsky’s approach to the menu combines his 10 years of experience with Momofuku with classic French technique and California’s slow food movement. Quality product and simplicity were central, filtered through techniques from various styles of cuisine. “For the most part cuisine was not sacred [at Momofuku], meaning Korean, Japanese, French technique, wok cooking — we could mix everything together. The whole objective was just to make delicious food.” The pared-down menu includes selections of traditional French-style small plates — rabbit rillettes, foie terrine — and mains like chicken with foie drippings and swordfish au poivre. Moses sleeper mille feuille with confit tomatoes, a savory dish tucked inside a puff pastry dough, taps into Pinsky’s experiments with pastry during the pandemic.

But it’s the one pasta dish on the menu that Pinsky highlights as a real treat: chicken liver agnolotti with brown butter, garlic and sage. “It’s a nostalgic pasta for me,” he says, adding that he had a version of the dish for the first time when he was 22 and staging at a restaurant in San Francisco. “I didn’t order it, but the chef gave it to me and made me sit at the bar to eat it. It was the largest plate of chicken liver,” he adds. “After that I kept going back to get it. I fell in love with that pasta. But since then, I haven’t been able to have it anywhere. For the past couple years, I make it when I can, because I don’t have anyone else to make it for me. So now I wanna make it for everybody else.”

Sinzer’s wine list is also French-centric but not exclusive. While Burgundy makes up the core offerings, there are also bottle selections from Argentina, New Zealand, the U.S. and Chile. “We definitely put just as much care into those as we do to finding and sourcing older Burgundy,” says Sinzer. “What’s important is the diversity in price point and the diversity in people that would be drinking the wines. The list should reflect the ability for people to get here. We want to have stuff that costs $12 a glass, and we want to have special occasion older-sourced wines.”

The intimate dining room was designed by Ian Chapin of Edsel Co., whom the owners met through friends at The Four Horsemen in Brooklyn. The idea was “Parisian wine bar meets Italian café meets London pub,” says Sinzer. Chapin fabricated much of the furniture in the restaurant, including the light fixtures; the bar top is Bramante Maestro, a slab of green marble sourced from an old building in Philadelphia. “We wanted something casual and fun that was hopefully bright and clean in its aesthetic, minimal in its furniture and fixtures, but felt really intentional,” adds Sinzer of the aesthetic vibe. “And hopefully we achieved that.”

RELATED: A Look Back at the Best Food and Beverage Recipes Featured in WWD