Compass: Habitas Tulum, a Hotel for the Burning Man Set 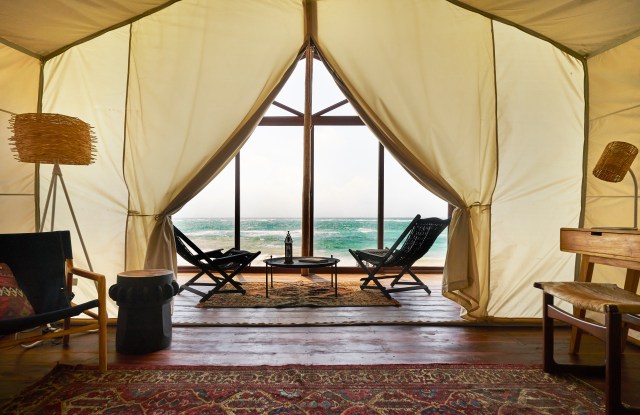 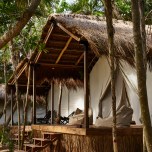 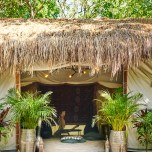 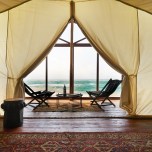 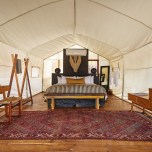 “If Aman hotels, Club Med, SoHo House and Burning Man had a baby, that would be the love child of what we’re trying to create,” says Oliver Ripley, cofounder along with Eduardo Castillo and Kfir Levy of the newly opened Habitas Tulum in Mexico’s Yucatán Peninsula. The hotel — Ripley describes the Habitas properties as “homes” — is situated between the jungle and a private beach on the Caribbean. However, the focus is not on staying inside; the team aims to create centers intended to increase human interaction and emotional connection.

Ripley, an entrepreneur who has experience creating companies in varying sectors — real estate, private aviation, agriculture — describes Habitas as “accidental” in many ways, a passion project born out of Burning Man, where Ripley has built a camp geared toward VIP attendees. Through the annual arts festival, he linked with event producers Eduardo Castillo and Kfir Levy who were already creating three-day retreat experiences under the Habitas name. When the trio was presented with an opportunity to create a Habitas experience in Tulum at a friend’s existing hotel, the initiative ended up being very successful, running for three months.

“In essence what we created was a pop-up hotel,” says Ripley of the concept, which brings people together around conversation, food and music. “We very quickly started getting feedback from people that the experience [they] were having there was something that was completely different, and completely unique from any other hotel experience they’d had before. We started thinking well hey, why don’t we build our own permanent hotel?”

Open this month, Habitas Tulum features 32 individual rooms as well as a glass-walled three-story clubhouse, built to be reflective of the local design aesthetic. As a brand concept, the Habitas properties built with an emphasis on “social architecture,” creating opportunities for guests to be open to interaction through communal spaces and activities.

“For us really what’s important is not so much what goes inside the rooms, but what goes on outside the rooms,” says Ripley. “Very rarely do I come to a hotel and think, ‘Wow that was a very memorable experience.’ Even if I’m spending several thousand dollars a night,” he adds. “I think right now, the whole world is shifting towards experience really being the new luxury. And we’re really building something for the soul. I think it’s a really different value proposition to what exists today.”

In addition to Tulum and the existing clubhouse in New York, the lifestyle brand plans to add additional properties in Malibu and Namibia. Building on the “home” angle, Ripley notes that guests will be able to leave personal items behind at the clubs — summer clothes in Tulum, for example. Rooms start at around $300 a night, and despite the luxury angle — which is there, with boutique interior details and amenities — Ripley insists that the Habitas properties are inclusive.

“Our community is not so much defined by geography or a profession or a nationality or an age group. It’s actually defined by people who share a same set of values,” he says. “We go from young people all the way through people in their Sixties and Seventies. People who really want to connect and engage with each other, meet new people and surround themselves by inspiring people.”

In essence, it’s the Burning Man spirit all year round.

“For me, one of the most valuable things that exists today is if I can go on holiday, obviously recharge, but if I can leave my holiday and have connected with somebody there, and I can take that relationship with me into the outside world,” Ripley adds. “That’s invaluable. That’s something that you can’t buy.”

More From WWD.com:
Tokyo’s Newest Boutique Hotel Is a Place for Socializing
Inside One Gun Ranch, an Ultra-Exclusive Malibu Wellness Retreat