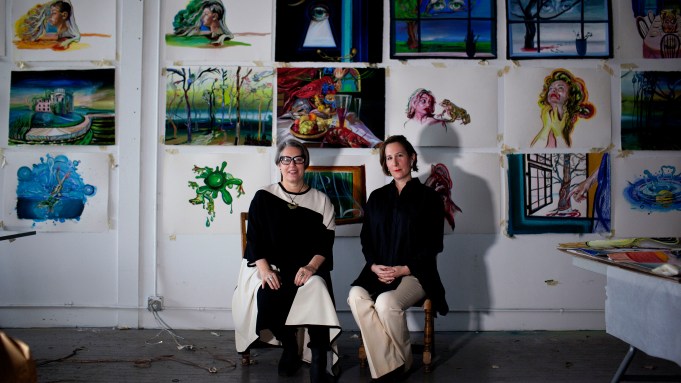 Like many popular classical ballets, Ballet Austin’s newest production is plucked from the world of fairy tales.

But fairy tales aren’t synonymous with idealism, and “Grimm Tales,” a full-length ballet making its debut March 29, explores the dark and often horrific side of Jacob Grimm and Wilhelm Grimm’s 19th-century stories.

Ballet Austin artistic director and choreographer Stephen Mills was inspired by an exhibition of New York-based artist Natalie Frank’s work and accompanying book, aptly titled “Grimm Tales.” Frank’s colorful drawings underscore the provocative nature and feminist voice of the Grimms’ stories, an element that has also been adapted into the world of ballet.

“What I think a lot of people don’t know is that the Grimms’ tales began as women’s oral tales, so they’re a way for women to represent their fears and anxieties and desires at a time where they were quieted by the church or the state. So they are a little bit transgressive,” says Frank of her source material. “Stephen’s company feels like a contemporary set of dancers: the bodies, ethnicities, genders — it’s very nontraditional, in the same way these tales aren’t traditional.”

Frank’s work will be incorporated into the production through onstage projections and animations, and she has teamed with Tony-nominated costume designer Constance Hoffman. While Hoffman is charged with the ballet’s costumes, the pair are collaborating on the textile design, and the entire process has taken a collaborative shape, with each element — including set design by George Tsypin and music by Graham Reynolds — impacting the various parts.

During a visit to Frank’s artist studio off the Jefferson L subway stop in Brooklyn, it’s quickly apparent that the women have fostered an easy camaraderie and friendship over the course of working together. Neither artist had previously embarked on a collaboration of this scope, rooted in conversation. And although daunting for both in the beginning, the experience of discomfort has paid creative dividends.

The costume designer was initially hesitant when Frank invited her to work on the project. Hoffman admired Frank’s book of artwork, but wanted to make sure that her involvement would benefit the project.

“It took me awhile to get comfortable with feeling that I wasn’t somehow intruding, to find my feet,” says Hoffman, adding that the pair began by discussing paintings and drawings that Frank had already created for the project. Her first inclination was to suggest that Frank design the costumes herself. “They were such a complete vision that I asked the question again, I said, ‘Don’t freak out, I’m not abandoning you, but do you really want me to do this?'” she adds. The answer, of course, was yes. “I tried to ask a lot of hard questions of myself as well as of Natalie in terms of the decision to work together, and I just wanted to make sure that we each had our voices but that it wasn’t unnecessary.”

The pair traveled to Austin, Tex. — Frank’s hometown — to watch the company’s dancers rehearse, and the experience helped inform Hoffman’s approach to the costumes. Through observing their quality of movement, she saw the importance of simplifying the costume design, and Frank came to a similar conclusion for her approach to the backdrops.

“My drawings are generally about aggregation,” says Frank, surrounded by her colorful works for various projects mounted on the walls. “It’s been a completely new way of thinking in terms of simplifying the visual imagery, because it’s no longer just the drawing: it’s the drawing, the dancer, the costume, the choreography, the music, the lighting.…I made this first set, and every single detail was so fussed over and everything was signifying something, and I realized when we went down for rehearsals there was no way that was going to be translated onstage.”

Hoffman notes the difficulty of having an audience extrapolate meaning from a still image when in context of a stage production. For her, the process involved letting go of specific details in the costumes.

“You put clothes on a person and you try to put that symbolism into them, an audience can’t actually follow it, so it’s just going to become kind of a blur,” she says. “The idea of aggregation, that’s what theater is: it’s all those things layering over each other and making room for the dancer to be telling the story.”

The ballet is composed of three distinct Grimm tales — “Frog King,” “Snow White” and “Juniper Tree” — linked through the idea of hunger, sexual, literal, or spiritual. The darkness of the original stories is very much intact, and there’s a focus on fleshing out the female characters. Many of the stories play on early childhood fears and authority figures, lending a topical quality in context of the current political climate.

There’s humor there, too, although of the dark variety.

“We’re ending the ballet with ‘Juniper Tree’ and this rolling head, and we’re beginning the ballet with ‘Frog King’ and a rolling golden ball,” says Frank. “I think we found a lot of humor to balance out the darkness, but I don’t think this is being billed as a production for children.

Jenna Coleman, From ‘Victoria’ to The Old Vic