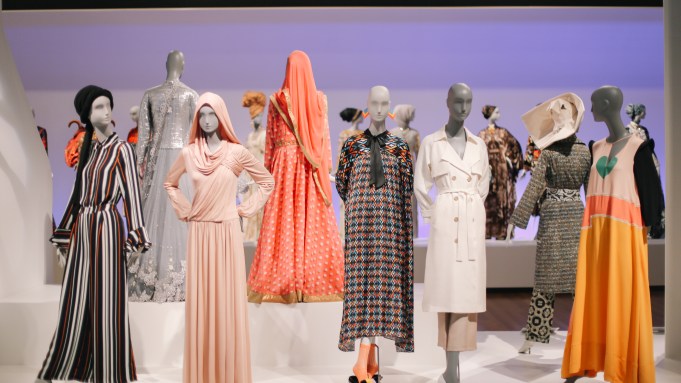 The colorful multimedia exhibit “Contemporary Muslim Fashions” launched Friday night at the de Young Museum in San Francisco with a preview party, which drew an international crush of more than 500 museum patrons and Muslim fashion donors to the show, along with more than 80 fashion designers and artists from the Muslim world.

Featuring ensembles including elaborate wedding gowns, workwear, sportswear, athleticwear and fantasy eveningwear, the unprecedented exhibit explores Muslim women’s fashion and current modest dress codes from around the world. The scope includes fashions from Australia, Japan, Malaysia, Turkey, Saudi Arabia, Dubai and the United Arab Emirates by established Muslim designers as well as experimental gowns by textile artists and designers with thriving lines and businesses in their regions. It was enhanced by a last-minute donation of couture wedding ensembles for a Middle Eastern princess, by Valentino, Dior and Stéphane Rolland.

“We spent two years researching Muslim fashions and their social implications, and attended fashion weeks in Turin, Dubai, Malaysia and London to find the leading designers of Muslim dress,” said Jill D’Alessandro, head of the Fine Arts Museums of San Francisco textile and costume arts department, which was founded in 1983. D’Alessandro curated the show with Laura Camerlengo, in consultation with Reina Lewis, professor of cultural studies at the London School of Fashion.

“From the start, we discussed how Muslim women have become pivotal in all aspects of the global fashion industry, from founders of companies, influential bloggers, designers, retailers, textile designers,” D’Alessandro said. “The current global fashion spend by Muslim women is estimated as $44 billion and growing very fast as young women enter the workplace. And we selected visually rich forms of fashion and style that represent diversity, national dress, daring interpretations, traditional textiles.”

Princess Deena Aljuhani Abdulaziz, the first editor in chief of the new Vogue Arabia and a noted expert on Paris couture — her mother was a client of Christian Dior — noted that today Muslim women interpret and express themselves with modest codes, according to the region, society and personal expression of faith.

“In Saudi Arabia where I live much of the year, out of respect women dress modestly, but we don’t feel a sense of coercion,” said the princess, who was wearing a blue Esteban Cortázar cotton twill zippered coat over a bouffant-skirted silver brocade gown by Australian designer Toni Maticevski. “It’s important to note that in the Middle East, men too dress modestly out of respect for our religion and society, wearing a caftan and a head covering. I’m thrilled that this show at the de Young can reveal the beauty of our dress, and how each woman interprets it for herself.”

Standouts in the exhibition include a tailored black-and-white geometric wool crepe abaya with a wide black leather belt by French-Algerian designer Faiza Bouguessa, who runs her fashion company in Dubai.

“This show is a great milestone for me,” Bouguessa said at the opening preview. She was wearing her own minimally detailed silk organza caftan over narrow silk crepe pants. “To get global exposure at such a beautiful museum is a great honor.”

The concept for the exhibition was first initiated more than three years ago by Max Hollein when he arrived from Germany as director of the Fine Arts Museums of San Francisco with ideas for exhibits that would incite lively global discourse and debate.

“I had observed that Muslim dress was a concern for some, and at the same time the international contemporary Muslim fashion scene is vibrant and booming and influential,” said Hollein, who was visiting from New York where in August he became director of the Metropolitan Museum of Art. “I wanted to start an examination and dialogue about Muslim fashion with a show that would inform, and be a discovery and perhaps even groundbreaking.”

Hollein noted that globally fashion companies like Uniqlo, with its modest collection, and Nike with its athletic hijab, were aware of the power of Muslim markets. As more young observant women enter workplaces around the world, not only do they require modest clothing, but also have salaries and discretionary spending, he noted.

Hollein noted that with close to 250,000 Muslims living in the six counties surrounding the city of San Francisco, the Fine Arts Museums are situated in an area with one of the largest Muslim populations in the U.S. Members of the Bay Area’s diverse Muslim communities were consulted by the curatorial team about this program.

The exhibition, which runs through Jan. 6, will travel next year to the Museum Angewandte Kunst in Frankfurt.