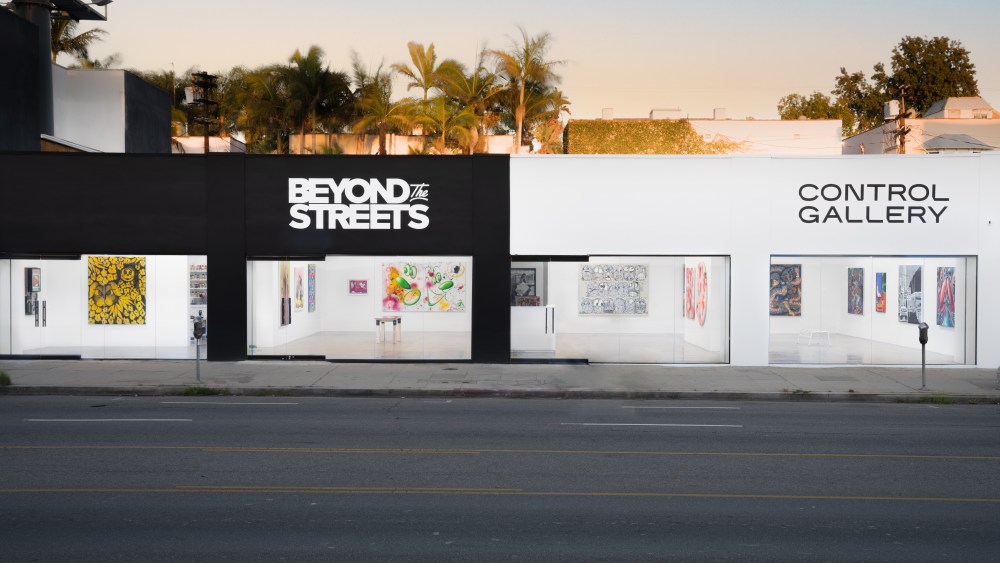 Traveling street art exhibition Beyond the Streets has found a permanent home in Los Angeles, California — with a companion space to further its mission of supporting artists working in nontraditional spaces.

Control Gallery, located next door to the new Beyond the Streets flagship, is a collaboration between Sky Gellatly of creative agency Icnclst and Beyond the Streets founder Roger Gastman. The pair connected through the artist Eric Haze more than five years ago and discovered a synergy in their approaches to working with and supporting artists in the graffiti and street art space. At the end of last year, fueled by the desire to operate in both Los Angeles and New York, they began discussing the idea of a permanent gallery space.

The gallery’s inaugural exhibition, “Post Graffiti,” celebrates the movement of graffiti and street artists into traditional gallery spaces. “Post Graffiti is a term that came up in the early ’80s with New York City artists coming off the subway trains and going into the gallery,” Gastman says.

Gallerist Sidney Janis presented the first “Post Graffiti” exhibition in 1983, which featured artists including Futura, Lady Pink, Kenny Scharf and Crash — who are all included in the inaugural Control Gallery exhibition. The show speaks to that legacy with the inclusion of an archival piece by Crash and new collaborative painting by Scharf and Futura, while highlighting innovation alongside younger artists like Ozzie Juarez and Othelo Gervacio. Works by Eric Haze, Katsu, Maya Hayuk, Todd James and Timothy Curtis are also on view.

“The exhibition is connecting multiple generations,” Gellatly says. “It provides the vehicle for a literal connection of the new generation with the artists that are undeniably huge inspirations to them.”

“Some of the younger artists in the show weren’t even born when that [1983] show happened,” Gastman adds.

The gallery’s name speaks to both men’s desire to create new opportunities for artists working within (or inspired by) graffiti and street art. “And rather than controlling artists, provide a platform where we can give them the power, control and authority over what they want to present,” Gellatly says.

The linkup between Gellatly and Gastman also establishes a larger platform for brands to connect with artists; both men have overseen collaborations with brands spanning from Louis Vuitton, Prada and Off-White to Nascar, Google, Microsoft and Sanrio. “We can be those matchmakers both on the creative and business side for brands who want to credibly integrate with artists,” Gellatly adds.

Beyond the Streets and Control Gallery span four storefronts and are located side-by-side on La Brea Avenue, with optionality for either concept to take over the other for larger exhibitions — Gastman describes the relationship between the spaces as “two friends giving each other a high five.” Control Gallery, open Wednesday through Saturday, will present six to eight exhibitions per year, with “robust” catalogues accompanying each show. It also launched a printed quarterly companion newspaper, Beyond Control.

Beyond the Streets started as a large-scale traveling museum-style exhibition and is using its Los Angeles flagship to further its mission of maintaining and sharing a historical archive of graffiti and street art. The space also features a gift shop with exclusive objects and prints, with a larger cut of sales going back to the artists.

“Education through entertainment has been an underlying internal mission,” Gastman says. “I can’t tell you how many people are no longer with us who through the years I’ve interviewed and gotten archives from. We wanna respect history and continue telling those stories, yet move forward,” he adds. “And treat the artists as they should be treated no matter their level.”