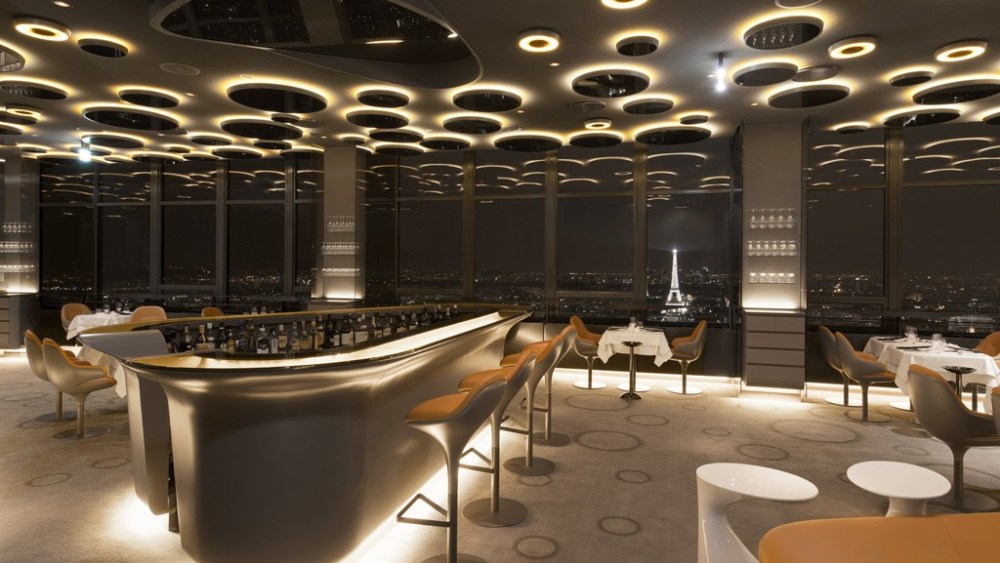 SKY HIGH: Despite the enviable view and Rainbow Room ambitions of its 56th-floor restaurant Ciel de Paris, the Tour Montparnasse has an image problem: Most consider the only skyscraper within city limits an eyesore. But that may soon change thanks to hot interior designer Noé Duchaufour-Lawrance and artistic director Yorgo Tloupas, who reinvented the restaurant’s visual identity.  Out went the latter-day Vegas trappings in favor of a camel, amber and warm gray palette in the designer’s signature organic shapes — a massive bronze-tinged resin Champagne bar, an irregular-shaped table within a wraparound banquette for large groups and smoky mirrors on the ceiling that reflect the city below. Newly appointed chef Christophe Marchais focuses on updated French classics (lunch menus are at 26 euros and 38 euros, or $32.80 and $47.90 at current exchange, while dinner per person is from 60 euros, or $75.65).

RENAUD PELLEGRINO REDUX: Renaud Pellegrino, the French accessories designer known for his high-end richly decorative bags, is back in action with a new store due to open during couture week. The boutique is located at 149 Rue Saint-Honoré, a hop away from the Louvre and Palais Royal.

Pellegrino, who rose to prominence in the Eighties, during which time he designed bags for the house of Yves Saint Laurent before founding his signature line, was forced to pull out of the game in 2009 when the brand’s new owner, Holmex, a Martinique-based family holding, shuttered the company. There were reported differences between its namesake designer and management over the firm’s development. At the time, the label counted among the few remaining high-end independent bag brands, boasting an atelier on Paris’ tony Rue Faubourg Saint-Honoré. Pellegrino managed to keep hold of his factory, however, which is based near to Le Mans in northwest France.

In 2010, the brand was acquired by L’Atelier du Maroquinier, a French leather goods firm that is located near the factory.

BIRD’S EYE VIEW: In an age of short attention spans, Korean photographer Ahae offers a powerful counter argument. His solo exhibition in the Tuileries gardens, “Through My Window,” is an ode to the power of observation — and the endless beauty of nature — conveyed via the best of one million photos he took through one window in his studio over the past two years. His landscape and wildlife images are to be showcased in a specially designed pavilion, and the free exhibition runs to July 23. Ahae is also a pioneer in organic farming, and supervises two organic tea plantations in South Korea.

BEAUTY MECCA: Tucked away in a courtyard off of the majestic Place Vendôme is the new, sprawling women’s-only spa Aquamoon. The space measuring 6,667 square feet boasts 12 treatment rooms, a petite pool and vast menu.

Following an assessment, recommendations are given for the type of package best suited to one’s lifestyle and needs. These can involve a few hours — or weeks-worth of treatments, which are focused on either slimming, vitality, distressing or antiaging. Prices range from 120 euros, or $151.30 at current exchange, for a half a day, to 3,720 euros, or $4,690.30 for five weeks.

A la carte is another option. There are, for instance, Californian, Balinese, Thai and Tibetan massages. Other services — among the dozens — include reflexology, Reiki, Shiatsu for the face and body, treatments involving water, a couple of types of yoga and manicures.

Favorites include the starter Scotch Egg Doré au Four and mains such as a filet de rumsteck and the 23-euro (or $29 at current exchange) Beef Burger. A tartare dressed simply with olive oil and a touch of salt has recently joined the lineup. Accessible either through the restaurant (for clients) or via an unmarked door to the left of the main entry, the basement speakeasy run by barman Inko Jarat has a following for off-the-grid creations, such as the tequila-based concombre fumant and the salers-absinthe-champagne concoction Salers Smash. But punch bowls served with six straws are also popular with this young, hip crowd (starting at 65 euros, or $81.95).

DREYFUSS FOR ALL: Fans of French handbag designer Jérôme Dreyfuss can indulge in a spot of his ’n’ hers shopping following the opening this month of his third Paris boutique. A new women’s store has opened at 4 Rue Jacob in the tony Saint-Germain-des-Près neighborhood, across the street from his inaugural store at number 1, which has been turned over to his fledgling men’s line. Like its predecessor, the 1,100-square-foot women’s store is inspired by midcentury furniture design and architecture, in particular the Case Study Houses built in California after World War II. The men’s store is the first stand-alone boutique for the Monsieur Dreyfuss line, which was launched in spring.  — Joelle Diderich

Alléno takes the “farm-to-table” approach seriously (and literally), with ingredients used in his dishes culled from areas surrounding Paris (thus the restaurant’s chosen name, which in English means Parisian soil).  On a wall here are penned the names of ingredients and their provenance. (Think “asparagus from Argenteuil” and “spearmint from Milly-la-Fôret,” for instance.)

Parisians locavores frequent Terroir Parisien also for the chef’s rendition of a hot dog (actually a “hot veal” or “veau-chaud,” in French) and the assortment of terrines and charcuterie by Gilles Verot, the Pierre Hermé of cold cuts. For dessert are traditional pastries like the flan parisien and strawberries with whipped cream.
Designed by the architect Jean-Michel Wilmotte, the restaurant has an open kitchen, a gray stone floor and white tiled walls. It seats 60, but the center table can accommodate another 14 people.

A SCENT OF ITALY: Aqua di Parma has just debuted its first freestanding store in Paris, which is its second worldwide after a location in Milan. The new 444-square-foot boutique’s interior decor — with wooden displays and autumnal colors — was inspired by the Italian town of Parma. Here, the fragrance brand’s entire line is available, as are products exclusive to the boutique, which was opened on June 5 in the Marais neighborhood.  — Diana Rodriguez

ART ATTACK: For those wanting to take time out from the fashion shows, Paris has a myriad of art exhibitions to take in.

Misia Sert, the Parisian muse celebrated from the Belle Epoque to the Roaring Twenties and close friend of Coco Chanel, is the subject of an exhibit at the Musée d’Orsay.  Her tumultuous life and attractive personality are explored through a wide array of media, including paintings, prints, posters, musical extracts, film and even part of her apartment’s decor.

Helmut Newton’s images of powerful women have already attracted 240,000 visitors to the Grand Palais, so the museum extended the exhibition through July 30. It includes more than 200 photos and a film lensed by his wife, June, who’s also the exhibit’s curator.

It’s all about turbulence at Espace Culturel Louis Vuitton, where a show by that name is on. Here, 11 artists of nine nationalities explore the phenomenon through their work, including video, sculptures and machines.

The Musée d’Art Moderne is hosting the first presentation of Christopher Wool’s work in Paris. His 30 large-format canvases, created over the last 12 years, combine silkscreen and hand-painting techniques with computer-processed images.

Last but not least — after London and Berlin, Paris is the final destination of “Panorama,” the retrospective of Gerhard Richter’s work from the Sixties until today that’s on at the Centre Pompidou. It showcases a wide selection of his photo-paintings, gray series and abstract pieces in a 10-room installation that was fully designed by the German artist himself. He did the same at the Louvre, where his related drawings and watercolors, displayed in France for the first time, are also on view in two rooms.

LUSH SPA: U.K. beauty brand Lush recently opened its first spa in France, in Paris’ 4th arrondissement. Up front, there’s a 444-square-foot boutique, followed by a 778-square-foot treatment area that includes two rooms. In line with Lush’s fresh handmade cosmetics positioning, the atmosphere here is rustic. Prior to a treatment, a client confers with her masseuse at a wooden table in a kitchen area, for instance. Treatments on offer include a 50-minute foot massage for 75 euros, or $94.60 at current exchange; a 50-minute facial for 90 euros, or $113.50, and a 60-to-80-minute “wellbeing” massage for 110 euros, or $138.75.

“Alix,” a 26-year-old brunette, concocts dishes to pick and nibble from, including almond salad and mashed chickpeas – all drizzled with Sicily’s finest olive oil. This “gastronomic picnic” for five guests goes for 150 euros, or $186 at current exchange, and each additional person (with the maximum total possible being eight), is charged 30 euros, or $37.

It is highly difficult to snag the table for dinner, since the restaurant is generally booked three to four months in advance. But getting a lunch reservation is easier, and — of course — it’s always possible to go shopping at the grocery store on Wednesdays and Saturdays. That peddles fruits and vegetables from Sicily, plus olive oil. — Laure Guilbault

Open Mon.-Fri. for lunch and dinner.

After she noted the damage caused by some nail polishes and their toxic nature, Luyet opted to concoct product formulas containing 85 percent natural ingredients.

The nail bar will run until July 31, but other ephemeral locations have already sprung up in Berlin, Copenhagen, Helsinki, Madrid, Milan, and Tokyo. — Dari Goldman