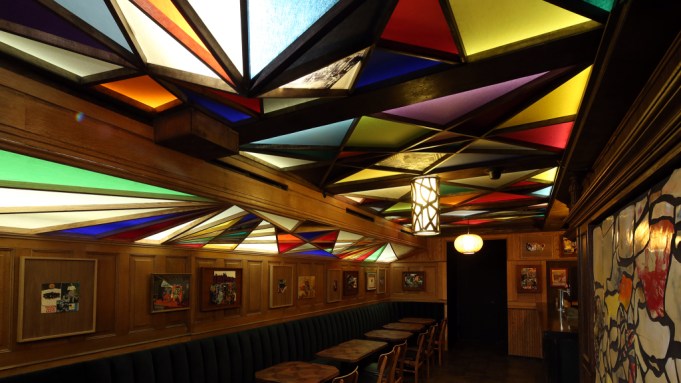 Freeman and his creative partner Justin Lowe have transformed the intimate space into a trippy work of experiential art that begins after the stark concrete entry hall of the bi-level restaurant, which opened in Chinatown in the fall and offers a casual Izakaya menu as well as the traditional chef-selected Omakase dining experience.

A fluorescent pink curtain of PVC plastic strips marks the cellar bar’s entryway — a brightly fluorescent-lit set of stairs, which Freeman and Lowe have crafted to look like a “strange wellness spa” complete with fake pharmaceuticals and advertisements with actors dressed as zombies doing yoga and shilling health products.

“The idea is to prepare you for one thing and then once you come in, it’s wholly different,” continues Freeman. “The flow from room to room is always considered. We often think of it like a cinematic cut where you jump in time and space with either a hard cut or a soft fade. [This space] is a hard cut — a smash cut, really.”

This garishly lit stairway leads into the bar’s wood-paneled main room, a cozy rectangular space that evokes a “Sixties California vibe.” The room features a softly illuminated ceiling of geometric panels in a rainbow of colors and is a nod to the artists’ first project together, titled “Hello Meth Lab in the Sun,” which appeared at Ballroom Marfa, a cultural and arts space in San Antonio, Tex.

That 2008 exhibition, Freeman explains, was a reference to the geodesic domes of “Drop City,” a rural counterculture artists’ community established in southern Colorado in 1965. “It was all very much inspired by [architect] Buckminster Fuller,” he continues, resting against one of the room’s chocolate brown ipe wood tables. “We [reworked] the geometry and used some softer architectural materials.”

References to psychoactive drugs run throughout the work of Freeman and Lowe, whose first collaborative effort came in 2007 and has continued with past solo exhibitions at Art Basel and the Museum of Contemporary Art in L.A. A focal point of the bar’s intimate main room is a framed arrangement of strategically cut ceramic tiles, which is based on the web pattern of a spider that was intentionally fed caffeine. “[In 1995] NASA did these experiments where they gave spiders different kinds of drugs and saw what they did with their webs,” continues Freeman. “Marijuana looked like a spider web, just half-finished. LSD was intense and intricate. Caffeine was actually one of the crazier looking webs.”

While Freeman and Lowe custom-fired the tiles to create this “cybernetic thought map,” the collaborators mostly used repurposed materials in outfitting the architectural elements of the cellar’s two rooms. A carved late-19th-century mantle pulled from a Manhattan town house separates the main bar from the cozy side room, which has direct access to Chef Kazuo Yoshida’s kitchen above. A set of neoclassical leaded glass windows rescued from the Williamsburgh Savings Bank in Brooklyn hang on the back wall surrounded by jagged fragments of vintage ceramics while vintage pendant lamps provide a velvety glow.

“We were looking at the art brut movement and some of the situationist [movement] for this area — specifically [Danish artist] Asger Jorn who in his home was dealing with a lot of ceramic and painting on top of thrift store finds,” explains Lowe. “It’s all about layering on top of different histories.”

Nearly every inch of the space is covered with some aspect of Freeman and Lowe’s vision, much of which has an interpretive significance that may go largely uninterpreted by guests looking to settle in for a cocktail. The artists, who five years ago dabbled in hospitality design with a room at the 21c Museum Hotel in Louisville, Ky., saw Juku as another opportunity to showcase their art “outside a white cube gallery [in a space] where people can actually spend time with it,” explains Lowe.

The cellar, which (unlike the restaurant upstairs) will operate sans reservations, offers a limited seasonal food menu along with cocktails boasting exotic ingredients of the Far East like yuzu (a Japanese citrus), jasmine, cherry blossom, sesame, matcha and ginger honey.

“With a lot of places we might be reticent to get involved in something that was mixed use and wasn’t just our artwork,” continues Freeman, who cites a strong professional relationship with Marlborough Contemporary gallerist Max Levai — and total creative control — as the impetus for the collaboration. “We knew we were in good hands — plus we knew we could really [design] the whole thing.”

Partying With ‘Little Clouds’ at the Art Production Fund