Royal milliner Stephen Jones plans to showcase 100 hats when his runway show is staged at sea aboard the Queen Mary 2.

Entering the Fifth Avenue landmark before normal business hours, several guests lingered on the shopper-free main floor, peering into the glass cases glistening with diamonds and Elsa Peretti’s contoured cuffs. Upstairs, a Tiffany blue-tinged marble wall in the Blue Box Café was a point of discussion, as was the sport of packing, due to the overly summery weather on both sides of the Atlantic and plans for three at-sea, black-tie affairs. Just as reserving a Cunard stateroom requires some advance work, so, too, does securing a seat in the café where a 5,000-person monthly waiting list is the norm, according to Bravo, a Tiffany’s board member. Dressed for the occasion in a robin’s egg blue-colored coat and dress, laden with Schlumberger-Tiffany jewels, Bravo said, “I feel like a Christmas tree, but I thought I’d go all-out for Tiffany.”

Eager to set sail for the seven-day crossing, Bravo welcomed others who will be part of the fashion lineup for this fourth annual event. Milliner Jones will be the main event, so to speak, staging a runway show on the high seas. Stuart Weitzman will be aboard for a chat with Footwear News editorial director Michael Atmore. Mark Bozek was energized about plans to show his documentary “The Times of Bill Cunningham” and chat with passengers about it. Journalist Hilary Alexander, fashion historian Colin McDowell and author Lindy Woodhead were among the guests getting better acquainted over baked eggs with shaved truffles. Students selected by the Graduate Fashion Foundation are vying to showcase their work in a group show at sea. 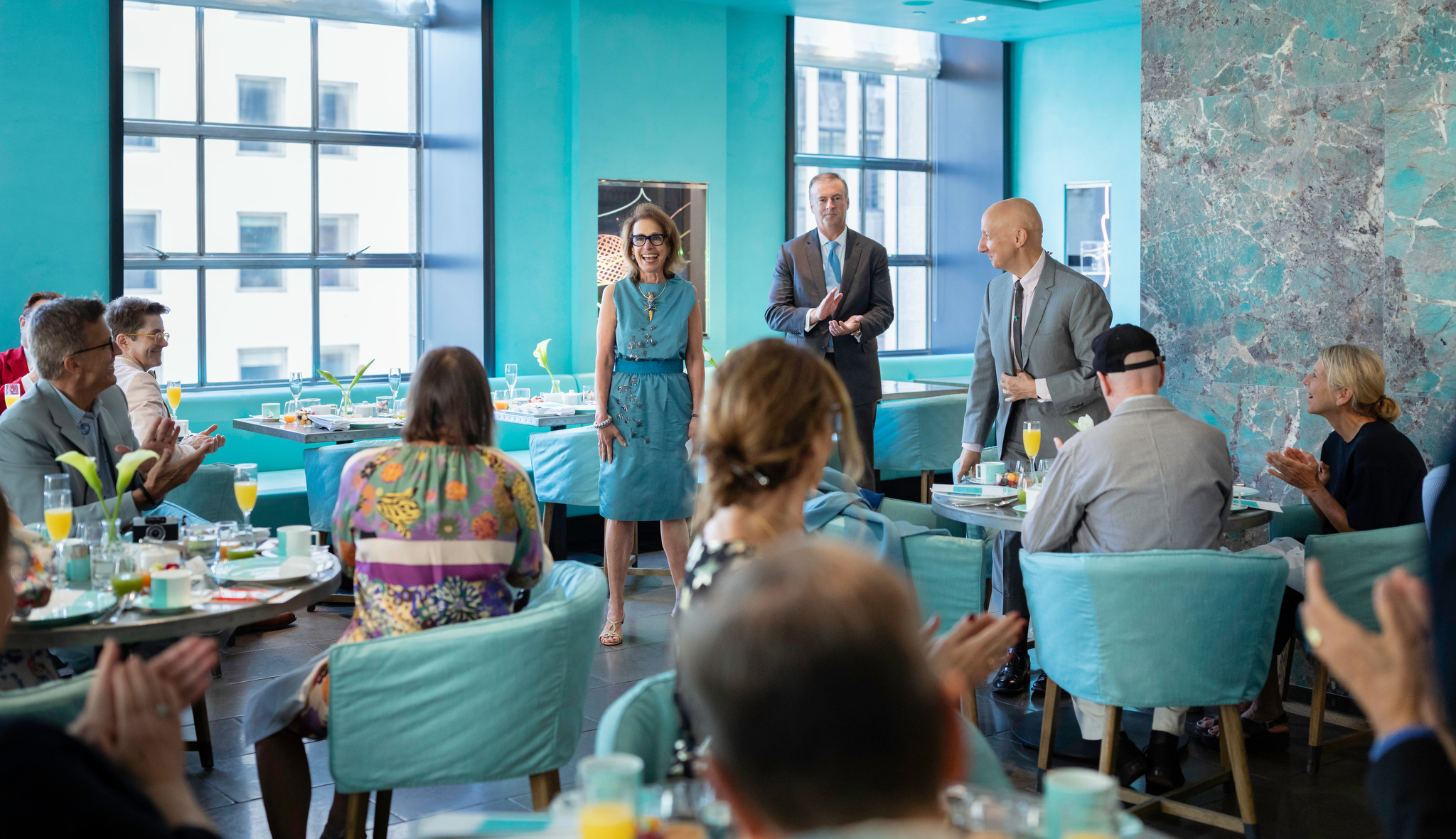 Jones has corralled 15 female models and five male models from London for his show, which will feature 100 of his hats. “The thing is, if you are doing a clothing fashion show, you could do 30 outfits or something like that. It’s a lot for the eye to take in. But if you are just looking at a hat, the hat goes by quickly.…You’re not going to study it for five minutes like you might study a ballgown,” said Jones, adding that another London resource — Giles Deacon — provided the runway, or should that be post-gangway — attire.

Cunard and the Queen Mary 2 resonates with Jones, who was born and bred in Liverpool, one of the bases for the British-American cruise line. “My parents went on the QEII. I grew up just by the seaside, so Cunard has always been part of my history, so I wanted to do something very modern. The first group is sailing into the future. It’s about all those seaside sailing trips, but in a very futuristic way. Everybody remembers having an ice cream by the sea when they were a kid, but I wanted to do that in the idea of 20 years’ or 30 years’ time,” said Jones in a Thom Browne suit.

Afterward, he planned to step onstage to compare it to hats of yore, and also the relevance of hats for various highlights of the British social season such as Ascot, Wimbledon and Henley. Having considered the destination, Jones said a third group will consist of spectacular hats — people’s crown and glories — “to be confirmed, rehearsed and written — so you’re going to be my guinea pig,” he said, ribbing Bravo, who offered, “I’m going to be the opposite. Are you ready for this? I have been working on my remarks for over a year.”

While many know Bravo from her leadership of Burberry and Saks Fifth Avenue, the seafaring crowd will get a wider spectrum of her life dating back to her childhood. Her granddaughter Jade Lily will be tagging along as a gift for her upcoming 16th birthday, who ruled out Paris in favor of London. “She said the shopping would be better. Maybe she knew about the [ailing British] pound,” Bravo said.

All the talk of voyages stirred up waves of the past. Jones recalled how in 1981 he saved up to buy an airplane ticket to visit New York for the first time. “My parents were so amazed that I actually saved up for something,” he said. “I remember coming out of the TWA terminal, funnily enough because of course that has been redone, and it was just like the movies. Steam coming out, big yellow taxi cabs clunking along and, of course, New York in the Eighties was very different than how it is now. It was dangerous on the subway, or how Central Park was then. But the most exciting, thrilling place I have ever been to.”

Bravo spoke of her own reverse trip aboard the QEII returning to New York Harbor after exiting Burberry. “Like so many American families, I was thinking of my parents 90 years ago on a ship in steerage. I became very emotional and it wasn’t just because I was coming back after nine years at Burberry and living in London. I was just thinking about all those who came before me.”

With this year’s transatlantic fashion week about to be afloat, Cunard executives were already talking about next year’s lineup on Saturday morning. Badgley Mischka’s Mark Badgley and James Mischka will headline the crossing, which departs Southampton, England on May 24, bound for New York. Along with a runway show and a question-and-answer session, they will offer travelers a little more: a capsule collection to purchase.