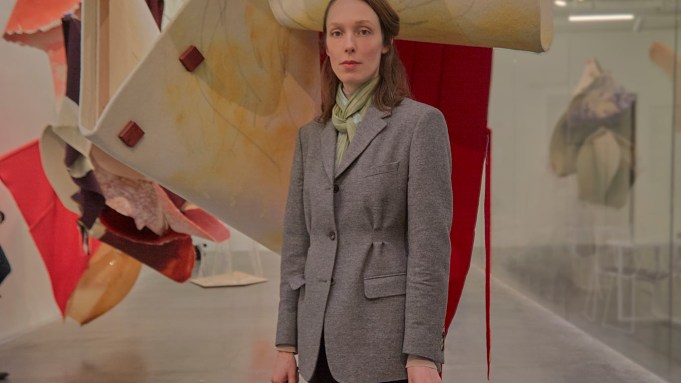 There are many different vantage points from which to consider Daiga Grantina’s sculptural work, installed in the lobby gallery at the New Museum. There’s the distant view upon entering the museum, when one can see the total installation as a singular piece on the other side of a clear glass wall. Closer up among the exhibition, the various suspended works become distinct, although referential, microcosms in and of themselves.

Artist Daiga Grantina came to the museum with a smaller, modeled vision of how she wanted her works to be installed in the unique museum space, located at the back of its ground floor on the other side of a clear glass wall. For the purpose of posing for a portrait — installing herself within the work — Grantina was similarly intentional with her outfit choice, choosing a wool blazer in a gray shade complementary to her work, so as to appear as if an extension of the installation.

“I started from the middle and I worked myself outward,” she says of coming into the space for the installation process. “At the same time, in the middle of the install, there was a moment when the depth came into the game and things were flipped from the outward in.”

A different view to consider is that of the security guard stationed at the gallery’s entrance, who gets to watch visitors interact with the exhibition over the course of its run, but also got to witness the installation process and Grantina at work. The relation of those inside-outside views is particularly interesting to consider for the lovely Paris-based Latvian artist, who was in town for a week to install and open her show.

“I have to be there and experience the space at the same time,” she adds. “It’s really part of the process and it’s when the whole show really becomes a piece. Works can travel by themselves, so it’s also a symbiotic thing — it’s not installation, it’s not sculpture. In the moment of the show, it can be two things.”

“What Eats Around Itself” marks the artist’s first solo museum show Stateside. The title refers to the source of Grantina’s inspiration for the show: lichen. A friend brought her a branch that was overgrown with lichen, which prompted a closer investigation into the organism and the idea of symbiosis.

“There’s a whole academic branch that focuses on this, because it’s one of the first organisms that inhabited our planet,” she says. “How it makes its own space, how it resisted for so long, how it survived so much: I think that’s super exciting, but especially the symbiotic part of that. The word ‘symbiosis’ was invented to describe lichen — so lichen is not illustrating symbiosis, but vice versa.”

Lichen — and its tendency to grow, “branching out” in concert with another organism while also decomposing around itself — served as a jumping-off point for her to consider the interplay of color, structure, mobility, space and materials. The works — crafted from felt, silicone, latex and paint — have a definite vegetative quality. The show’s first piece is an orange felted structure hanging in a half-conic shape; Grantina carved out pieces of the felt, with strips of silicone extending from the felt’s seams. “That’s the most important element from the beginning of the process, the seam and what grows out of that,” she says.

She was interested also in the cohesion of the various sculptures, which can be considered both separately and as a whole. Some mimic letters — specifically a “T” — which remark on the stability of space; wooden blocks throughout the exhibition also act as seams and scaffolding for the works. She also draws inspiration from the poet Rainer Maria Rilke by interpreting his interest in the rose through shape; many of the components are rounded to mimic petals.

Grantina plays with light and shadow throughout her work, an inquiry that was supported through a unique attribute of the museum’s ground-floor gallery: While not commonly utilized, the space features skylights that allow natural light to interact with and become part of the work.

Although all the work was created in her studio in Paris, it can be described as site-specific.

“In the sense that I think about the echo of each sculpture in a way that it creates a total picture for the show,” she says. “This kind of proximity and almost clash composition is something I really enjoyed also in relation to the city.”

Her usage of color also connects the idea of lichen with New York City. Using her first piece as a benchmark, she approached the show as being built on shades of orange. “I was aiming for a certain intensity for New York,” she says, although the show blends in purples, reds and yellows.

“There’s the whole range of colors in lichen — the green is the most common maybe that we think of, but depending on where it grows it absorbs the materials inside that, like stone or the whole palette. It’s an incredible field of visual impression,” she says. “It’s a very, very psychedelic topic for me.”

While the New Museum is a distinct installation, her approach means that it’s not necessarily finite. Grantina, who represented Latvia at the recent Venice Biennial and has a solo show at the Palais de Tokyo in 2018, plans to continue her exploration of symbiosis, and is interested also in experimenting with different scale. After all, lichen is continuously branching out and adapting: She intends to do the same.