The Three Kings Restaurant Group is at it again. 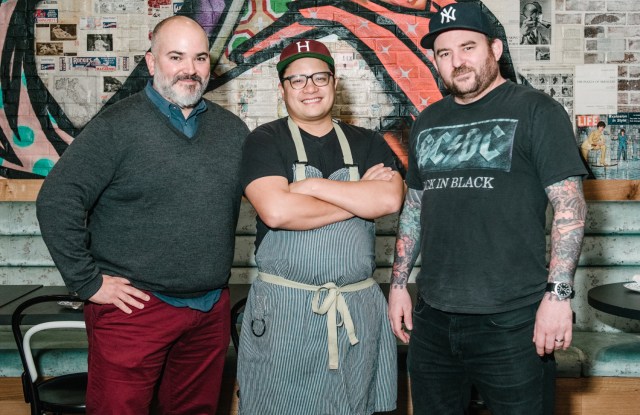 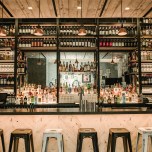 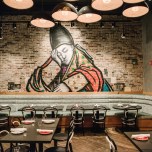 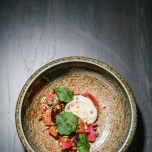 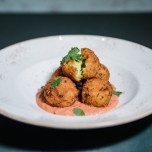 “I was trying to take some of my favorite elements of Italian food and have fun with it,” said Dale Talde, sitting inside the artfully urban-rustic dining room of his new restaurant Massoni, located inside the Arlo Hotel in NoMad. “Dining is about fun.”

It’s the latest restaurant project from the Top Chef alum along with his Three Kings Restaurant Group partners David Massoni — after whom the restaurant is named — and John Bush. The trio exude laid-back cool, a vibe that they channeled into their new dining room.

“Our main starting point was this beautiful glass and steel and concrete building above us that was just built,” Massoni said of the restaurant’s design within the larger boutique micro-hotel. “It’s brand new, we wanted the restaurant to feel like somehow the building got built on top of it, and somehow there was this old trattoria or old bistro that had always been here.” The restaurant accomplishes that through design aspects such as hardwood floors, exposed brick walls painted by graffiti muralist EWOK, and high ceilings within the concrete and steel framework of the new building.

As for the food, Talde created an “inauthentic” Italian menu, blending influences from other cuisines, such as Asian, Indian and North African. Dishes include Biryani rice balls, which evoke the Bangladeshi cuisine of many New York City restaurant workers and adds an Italian spin through the dish’s spicy tomato sauce. Massoni also offers the requisite pastas, all of which are made fresh in-house.

The trio is also in charge of Barlo on the hotel’s second floor, a bar and lounge concept that encompasses a swanky, partially enclosed terrace lounge space. They plan to expand and open a rooftop bar next year, which offers impressive views of their Midtown surroundings. A “bodega” food counter in the lobby serves takeaway items such as pizza, muffins and coffee, a direct play for neighborhood regulars. The variety of venues within the space is certainly letting the trio get creative. “We get psyched on throwing parties and coming up with ideas,” said Talde of what’s to come. “We’re toying with the idea of turning the second floor studio into a karaoke room that you can rent out, or doing BBQ parties up on the roof,” he continued.

It’s a highly personal project, and not just in the sense that Massoni continues the team’s tradition of naming restaurants after one of them (the men also run Talde in Brooklyn).

“A good friend of ours, who’s known us for a long time, walked in last night for the very first time,” said Massoni. “And she said exactly what we would hope people who know us would say: ‘It’s you. It’s the three of you when I walk in here.’”