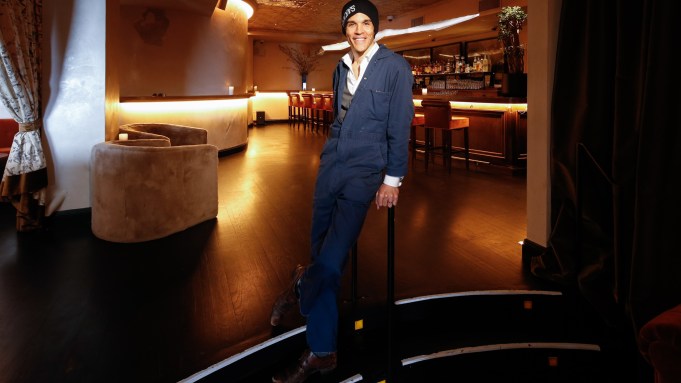 Change is the only certainty when it comes to the nightlife industry. Damion Luaiye, the former creative director of Rose Bar at the Gramercy Park Hotel, is acutely aware of that reality and took a broader philosophical approach when opening Et Al, his latest endeavor in Manhattan’s Lower East Side.

“The idea was to name it Et Al — ‘and others,’” explains Luaiye, who eschewed the notion of opening his own self-branded establishment after more than a decade as an industry influencer. “We are referencing the guests, the artists, the people who put this place together. There are no abstracts. It’s always referencing some level of personality.”

Dressed in a pair of blue coveralls atop a crisp white collared shirt, Luaiye rests casually upon one of the room’s custom-made sofas. In fact, all furnishings and art inside the relatively intimate space were bespoke crafted for Et Al, but nothing will remain in place for long. “There’s something nice about having a piece of art on the wall and having to engage the drama of loving it and letting it go,” adds the congenial entrepreneur. “It’s the ephemerality of it.”

This includes a playful set of portraits by local artist Adam Handler that colorfully punctuate the club’s muted color palette of goldenrod, burnt sienna and neutral browns and grays. “People have moved away from that heavy gentlemen’s club look with overly-tufted stuffed furniture and have gone a little bit more delicate, curvy and sensual,” says interior designer Meg Sharpe.

Sharpe, whose résumé includes former New York City hot spots The Lion and The Diamond Horseshoe, carefully designed the space — which can accommodate up to 150 guests — as a “high-end living room,” realizing a recent shift in party culture.

“We came to this concept of really wanting the place to feel like home,” adds Sharpe with a soft smile. “It’s all about the intimate parties, the whispers, the small gatherings. This is meant to be a place where you can sit for hours and hopefully you wind up drunk, but maybe you’ve had two great conversations along the way.”

In an effort to further promote face-to-face interactions, Luaiye joined a growing worldwide trend in nightlife by banning cell-phone use at Et Al for six weeks after opening in February, which was unsurprisingly polarizing. “It was split down the middle 50-50 [in terms of support],” says Luaiye. “It’s been a decade that smartphones have been what they are, so now you have a whole range of people who have never socialized in their adult life without social media or a phone in their hand.”

After planning this sort of technology ban for years, Luaiye realized his customer wasn’t quite ready to disconnect digitally. Upon entering the venue, which boasts a sinuous bar opposite the main lounge space, guests would have their phone locked in a small pouch by a doorman, returned to them in the protective casing and only unlocked if they’ve stepped outside.

While a portion of Luaiye’s clientele revolted against the strict phone ban, other nightclubs around the world including Berghain in Berlin; The Box, Phonox and Fabric in London, and Output in Brooklyn have all successfully discouraged phone use among their clientele.

“It just got to the point where you realize the world has changed and there is a level of communication that you need to have,” says Luaiye, who has since lifted the ban but asserts he will eventually reinstate the policy with revisions to its implementation.

It’s this passion for in-person engagement that acts as a driving force behind Et Al’s creative direction in every element from the music (mostly DJ sets with the occasional live musician) to the generously sized coed restroom lounge area, which features a long banquette in front of a mural by artist Blair Whiteford.

“By the time you get to the bathroom, it’s chapter five of your experience,” says Luaiye. “It’s the last thing you’re going to see and it needs to shine in its own special way. It’s typically darker — more prone to trouble — and in the age of social media is one of those spaces that is the last element of privacy.”

Luaiye surmises that it may ultimately be that desire for privacy that will propel the clientele of Et Al — and other venues — to embrace his philosophy on departing from a near-constant digital connectedness. “There is very much a hunger for participation right now,” he notes. “People are looking for something that is less produced and more casual. Everybody needs a little escape.”