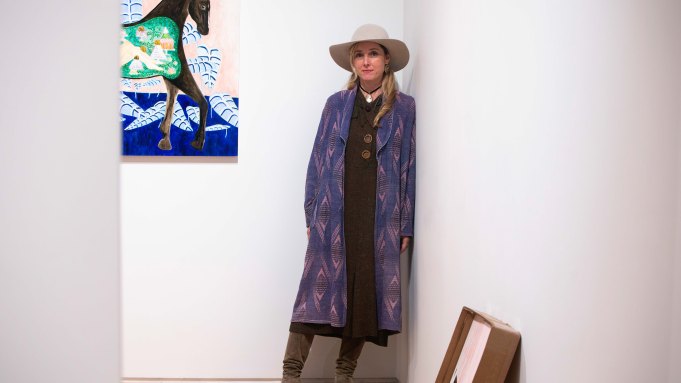 From the pocket of a white denim jacket in the back of Denny Dimin Gallery, Dana Sherwood pulls out a rock. Not just any rock, though: she’d picked this one up while visiting the Gobi Desert. Shortly after, she took it to a Mongolian shaman, who blessed it and handed it back to her as a sort of talisman.

The jacket is also stitched with rows of stuffed snakes, which the artist picked up during her various trips to Mongolia over the last few years and which are used by shamans as a form of protection. Sherwood, a longtime equestrian, was initially drawn to the country because of its horse culture, but the Shamanic culture proved influential as well. Over the past four or five years, she’s made three long-term research trips to the country along with her husband, the artist Mark Dion, and their young son. Traveling the region along with other artists, some local, they spent time in the country’s capital and in more remote areas with nomadic tribes.

“The immensity of being in the landscape there is a little bit overwhelming. We’d meet herders and they’d immediately say, ‘you can borrow our horses and go out,'” says Sherwood, her long blonde hair side-braided under a hat; gold earrings in the shape of eyes dangling. “The infrastructure’s very different and then also the land technically belongs to the people, to everybody. There’s no ownership of the land.”

A couple of days before the opening of her second solo exhibition at Denny Dimin, Sherwood was busy painting her show’s title on the wall: “Horses for the Trees.” Nearby, her team was working to set up a tent in the gallery’s front space, dyed pink and painted with the outlines of horses and eyes on the top. It was inspired by her time spent in traditional Mongolian yurts, which serve as a central gathering space for community, as well as her family’s heritage in theater and circus.

Instead of the dried yogurts and milky tea shared in the yurt, Sherwood’s tent will house a screening of Sherwood’s new video art piece “See/Sight,” which she largely filmed in Mongolia. The resulting video builds upon Sherwood’s earlier work, in which she set out elaborate displays of food for animals and filmed their reactions using an infrared camera.

“I was trying to communicate with possums and raccoons through food. I would plan out these feasts and expect that they would behave in a certain ways, and they never did,” she says of that series of work. “The work was always better when they behaved different than I expected; it was so much more interesting than if they just performed for me. I started thinking if that makes the work better when there’s this element of chaos and you’re giving up some of the control and it makes the work more interesting, where else can I apply that? So I started applying it to painting and not being as meticulous and controlling about how I made a mark on the paper,” she adds. “And I was like alright, I’m going to try this with horses in my next project.”

She modified the infrared on her camera to film the horses in Mongolia during the daytime. Infrared light spectrum is invisible to the human eye, and Sherwood connects the project’s form to themes of surveillance and different ways of “seeing.”

“I was interested in how that corresponded with this shamanic layer of the project, this second sight, this invisible sight,” she says. The video layers imagery of wild and domesticated horses with the Mongolian landscape and her own son, and an obscured audio track of her son’s early speech attempt. In one shot, her son is seen approaching the lens of the camera, regarding it with a similar curiosity as the horses.

“That was not planned whatsoever,” says Sherwood. “Also being a female artist with a child I’m a little bit self-conscious, so I was not planning on putting my child in the work. But it was so perfect because the work was about how do you communicate with animals and how do you create a bond and how do we talk to each other.”

Sherwood’s work often remarks upon the interaction of humans and environment. The way she sees it, closer relationships to the earth often result in a greater urgency for preservation. But while she observed that the relationship of respect between self and landscape and animals was philosophically different in Mongolia than the general American approach, the issue of environmental crisis is still there; in the wintertime, a population influx into the country’s capital Ulaanbaatar causes the city to become one of the most polluted places to live in the world due to a surge in coal burning.

The exhibition also features a series of colorful paintings and drawings that feature a young woman and familiar iconography that Sherwood has been working with, including, yes, horses, but raccoons and desserts, too. (A collaborative sculpture from Sherwood and Dion was recently exhibited at the Storm King Sculpture Center, in which Sherwood created a display of desserts cast in resin and teeming with insects.) Some of the smaller watercolors in the gallery were created while she was in Mongolia, others were created afterward, informed by her experience.

Underscored in the work is the mythology of Persephone and “Alice in Wonderland” — in which two women are driven underground by, among other things, curiosity. In the case of Alice, the character discovers a world of animals and plants that behave differently than she expects, and is transformed in the process. It’s a story that Sherwood can certainly relate to.

“When you start thinking about it, it’s really a universal story,” she says, also bringing up the author Joseph Campbell’s idea of the hero’s journey. “He talks about how that’s not something that happens for women: women don’t go on the hero’s journey, they don’t have the same call to adventure. And so I was thinking about this as no, actually, they do. Actually women have their own rich inner life and challenges and adventure and drives just as men do, that are driven by the same things: desire, and the unconscious.”