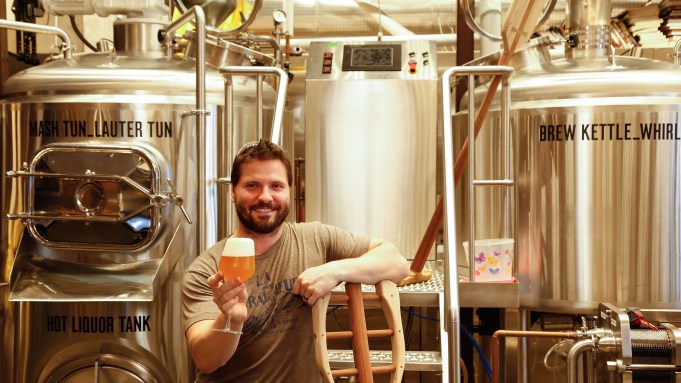 A few days before Circa Brewery Co. officially opened in Downtown Brooklyn, head brewer Danny Bruckert was already dealing with crowd control — and racking up repeat customers. “They say curiosity kills the cat — I’ve seen you doing this for the past couple months now, so I wanted to come in and see,” says a woman who’d wandered in from the street, as Bruckert poured her a gratis glass of his pale lager. “I’m going to bring some girls here one night. Have a girls’ night out.”

Bruckert was working for Red Hook brewery Sixpoint when Gerry Rooney approached him about the idea of opening their own place. “At the time, I didn’t take it very seriously. Working at a place like Sixpoint, people come around saying, ‘Hey, I’m going to open a brewery, what do you think?’ It happens a lot,” says Bruckert. “I didn’t really take it seriously until he hired my brother, who’s a pizza chef. Without telling me — not that he needed to tell me — [Rooney] went to Portland to try my brother’s pizza and offered him a job. At that point, once he accepted, I said, ‘OK, let’s do this.'”

With his chef twin brother Luke heading up pizza-making operations and Bruce Dillon as executive chef, serving all-American dishes like burgers and fries, Bruckert’s focus can remain on Circa’s front-of-house brew operation. The lofty space — 6,000 square feet — includes a brewery out on full display behind a long bar, where Bruckert will produce all of Circa’s beers on-site. While he will focus on producing consistent, drinkable beers that pair well with the cuisine, there will be plenty of room for experimentation, including barrel-aging.

“There are two main fermented beverages: wine and beer. They aren’t distant cousins. They are close cousins,” Bruckert explains. “Most people, when they think of beer, they think of a product — like toothpaste. They buy this brand, and they expect this brand to taste the same every time. If it changes, they are taken aback,” he continues. “The wine industry doesn’t have those limitations. They just happen to market themselves in the right way, but it’s an agricultural product like beer. It’s subject to variances, just like beer, but no one cuts brewers slack. We have to make the same product every time. I think [barreling] is bringing beer closer to what wine is. It’s nice to be able to say to somebody, ‘Hey, you like the saison? Great, enjoy it while it’s here, because next time, it might be different.'”

Bruckert hopes to also work toward selling Circa through cork and cage bottling, similar to how Champagne is sold. “People do a lot of cans nowadays, which is great. That’s not something that we’re ruling out, but I love the cork and cage experience,” he explains. “I feel like it just involves all the senses. Once you pop the cork, you hear the carbonation, and when you pour it, you can see this billowy, fluffy head. It’s like the beer is putting on a show for you.”