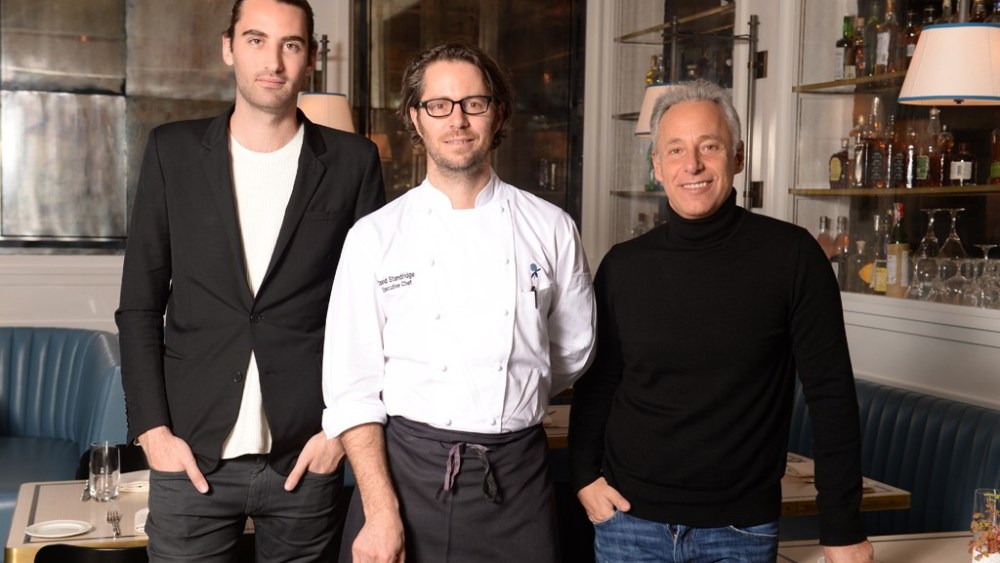 “I don’t know what, if anything, would convince me to open a nightclub right now.” Nightlife impresario David Rabin is sitting in the sun-drenched dining room of his new West Village restaurant, Cafe Clover, a few days shy of its opening. It’s the latest from Rabin, who emerged as a major nightlife player after opening Lotus in the Nineties. He lorded over the Meatpacking District, even at one point holding the title of president of the New York Nightlife Association, spending his administration lobbying against curfews and irritated neighbors. These days, he’s spending his time less nocturnally, focusing on The Lamb’s Club, the power lunch go-to favored by Midtown suits that he opened in 2010. He spends his nights at The Skylark, his other Midtown spot, a venue for fashion week parties. “It’s hard because I lose people between noon and 10 at night,” he says. “I really felt personally that I was missing a place to see people at dinnertime.”

Rabin has built his hospitality empire, sprawling all over Manhattan, on his ability to make connections. A few years ago, looking to meet the industry’s next up-and-comer, he reached out to his wide network of art world and fashion friends. He was soon introduced to Kyle Hotchkiss Carone. “Literally six women in a row said, ‘How do you not know Kyle?’” Rabin says. “We had a great lunch and he’s all everyone said — he’s very smart and understated.” The pair subsequently teamed up on several nightlife ventures; first was Cole’s, then Jimmy at the James and Bar Naná.Despite support from their respective circles, the pair has not succeeded in establishing a niche. Coles shuttered last May after just over a year in business and Bar Naná looks to be headed toward a similar fate — Olivier Theyskens, Prabal Gurung (a central member of Carone’s clique) and Public School’s Dao-Yi Chow and Maxwell Osborne once had their postshow bashes there, but support has dwindled.

With Cafe Clover, the duo is aiming for a different scene — more neighborhood-y restaurant, less party spot. Though, as with their past ventures, the pair is relying on the support of their well-cultivated social networks. “My friends are going out two times a week. Kyle’s friends go out four to five times a week,” Rabin said. “I think that’s what has really worked well, with how we can fill a room,” Carone continues, sitting next to Rabin in a corner banquette. Though Carone is as well known for his social circle — well documented on Instagram and BFA — he seems the quieter, more introspective of the two. “It’s all kind of the same world, but my friends can come in at 10 and be a table of eight, and his can be a couple that’s coming in at 7. The older guests want to be around young and new energy, and the younger people who are coming also want a bit of the sophistication,” says Carone.

The restaurant sits on the corner of Sixth Avenue and Downing Street, bordering the West Village, SoHo, and TriBeCa. It’s flooded with light pouring in from the floor-to-ceiling windows. “We basically wanted it to be casual, but elegant. Everything’s sort of elevated,” says Carone, who took up the reins in conceiving the design and “energy flow” of the triangular space’s interiors. “To me it’s this perfect combination of a little bit West Village, a little bit London, and a little bit 1950s.”

It also has an air of a Parisian salon; black-and-white walls lacquered in geometric patterns enclose the dining room, prettified by baroque style mirrors, vintage lighting and powder blue banquettes. Each table is topped with a tiny bush of clovers in beveled pots. “Clover adds nutrients back to the soil and keeps the circle of life a little bit,” Carone says.

Rabin and Carone hired chef David Standridge to execute their vision of green-market centric American fare with a focus on seasonality. Standridge comes from Market Table, where he earned a following in his two years helming the kitchen. He spent six years as a sous chef at L’Atelier de Joël Robuchon prior to that. “I was looking for that perfect balance of really delicious approachable food, but a little more refined,” Standridge explains of the menu.

The focus is on unexpected lighter fare — from lobster accentuated with coconut oil and kohlrabi, to reimagining risotto with lentil to a quinoa tagliatelli seasoned with beet greens, maitake and sunflower kernals. “You’re going to love what you’re eating here, but you’re not going to ruin your last two workouts,” says Rabin, to which Carone was quick to follow up: “We have your best interests nutritionally at heart in the kitchen.”

For all of their years in the business, Rabin is quick to admit that their formula this time around doesn’t skew too differently from their previous approaches. However, unlike their nightclub spots, which depend on creating an air of perceived exclusivity, they are trying to strike a vibe of familiarity with Cafe Clover. “People walk in here and they don’t realize that they’re friends with other people in here and are like, oh I know those guys. I hope that’s the vibe the room has,” Rabin says. “My friends are eager to come here. They’re psyched.”