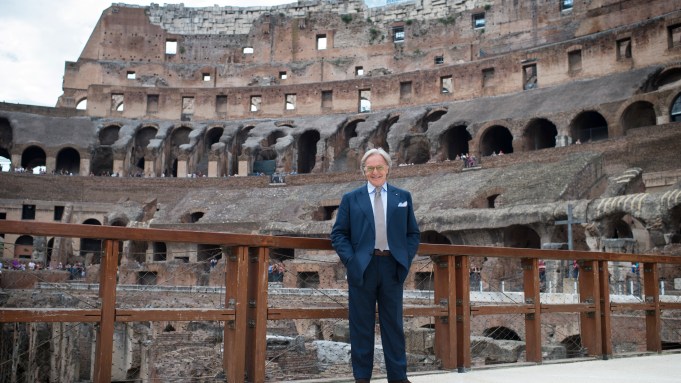 The first part of the restoration of the Colosseum, started in September 2013, has been completed and an event marking the milestone will be held there today hosted by Diego Della Valle, chairman and chief executive officer of the Tod’s Group, in the presence of Italy’s Prime Minister Matteo Renzi.

In 2010, Della Valle revealed he was pledging 25 million euros, or $27.6 million at current exchange rates, for the work. So far, 31 of the iconic structure’s arches have been restored, or a total surface area of 143,640 square feet, as well as 109,620 square feet of travertine, and the installation of new gates, in addition to the recovery of a bas-relief of a gladiator and other architectural treasures. Of the amount Della Valle pledged, 10 million euros, or $11 million, has so far been spent. The restoration is expected to be completed in four or five years, between 2020 and 2022.

Ahead of the event,  Della Valle talked with WWD about the project, philanthropy and Italian politics.

WWD: How do you feel now that everyone can see the first results of the restoration? You must be very proud.

Diego Della Valle: Yes, we are very happy and it gives us great satisfaction to see this monument, which represents Italy around the world after the works, with this marvelous color. The color has returned to white pink, very beautiful and we couldn’t have imagined it before. It even lights up the area around it in a different way.

One of the reasons for doing this was to emphasize the pride of being Italian and doing things for the country and now when I see it, I feel proud for me and for the people who work in my group and for all the people who are loyal to my products. Everyone has partly contributed to this project.

WWD: What have the main challenges been?

D.D.V.: Objectively, we didn’t encounter great obstacles or challenges. There are some that have tried to stop the works, but many more people have collaborated, from ministers and the city’s administration, which actually did a great job. We discovered a new world, which is the state machine, people who love this country — and there are many who surprised us a bit because we didn’t imagine such professionalism and so much desire to take action.

WWD: There are often a lot of complaints about Italy’s bureaucracy.

D.D.V.: Not in our case, but we work outside of the government, we have to check on the timing of the works and the daily organization of the restoration.

WWD: What kind of event do you have in mind to present the works?

D.D.V.: There will be a press conference with Prime Minister [Matteo Renzi] and the minister of cultural assets [Dario Franceschini] to explain what has been done so that people will understand and we will also outline a future program. We have a foundation called “Amici del Colosseo [Friends of the Colosseum]” that must talk about the  restoration around the world and find supporters that will contribute to Italy’s artistic and cultural patrimony. Within this foundation, there are many different things, all dedicated to people.

WWD: Does this foundation already exist?

D.D.V.: Yes, and it will start to work now, let’s say from July 2 and among the many different things, we are happy to help show the monument to all those that may never have seen it. There will be a night lighting that we will set up, very suggestive, and we will organize school trips also to show the Colosseum by night. We do everything with the utmost respect for the monument. The event [on July 1] is a way to underscore that, as Italians proud of our country, we would like to request for  many others to support the Italian artistic patrimony.

WWD: You have been outspoken about this in the past, do you think things have changed in the meantime?

D.D.V.: Yes, something has been done. Fendi has restored the Trevi Fountain, Bulgari the Spanish Steps [and] Renzo Rosso the Ponte di Rialto in Venice, so it’s a good start. And I think that with the help of the government, which is in a certain way a reference shareholder [of the country], big state companies can also take it upon themselves and become tutors. Because it is important to finance [restoration works], but it is also important to control that the work plans and the way they are conducted be done in a very precise, very correct way. In the end, this means more tourism and a lot of jobs for our country.

WWD: Why do you believe state companies may not be sensitive to this issue?

D.D.V.: Well, sometimes it’s a matter of not being used to this. There is less of the American or Anglo-Saxon mentality of supporting what is public as a private entity. This does not mean there is no desire to do so, on the contrary, but we must sit down and explain how we did it and I am convinced that many people who want to do something may not think about it. Entrepreneurs especially, they are so busy and when Saturday evening comes around, that’s the moment they would rather go to dinner or watch a movie rather than start working on a project. We can contribute and help with our know-how and the experience we have gathered.

WWD: Last year, you presented your “Noi Italiani [We Italians]” project, which was seen by the media as a political party, signaling your stepping into politics.

D.D.V.: That is something else linked to the world of solidarity that has nothing to do with this, which is focused on supporting the country on what is perhaps the most important thing we have — the artistic and cultural patrimony, which means a lot of new jobs, especially for young people. The other is a solidarity operation that I think all companies must initiate in their territories to support people who need it the most. We will start to talk about this in September. Someone has tried to turn it into a political idea but there is nothing political in this.

WWD: In reference to the foundation Amici del Colosseo, you had talked about a structure near the monument. Is this still a project?

D.D.V.: We will build it, we are defining the best place, the one that is less invasive, but it is a service center, which is necessary, for an older person that needs to be assisted, for example. There is a need for primary services that allow people to be treated in a civil way.

WWD: Did you expect such a global response to your decision to support the restoration?

D.D.V.: Frankly no, but then I realized that there are many people around the world that love and respect certain things that our country represents. I believe the Colosseum can be defined the monument that is a symbol of Italy. We have wonderful sites from Milan’s Duomo to cities such as Florence and Venice, but perhaps this is the monument that is most remembered by people.

D.D.V.: The Colosseum is always impressive when you see it. I was a child when I first saw it on a trip with the school, after a 10-hour bus ride. Usually, as an adult, things seem smaller than when you saw them as a child, but this is as big as back then. [laughs]

WWD: Rome has been affected by political scandals and a new mayor, its first woman, Virginia Raggi, has just been elected. Do you think this restoration will contribute to a positive new phase for Rome? Do you see positive new signals?

D.D.V.: I believe trying to support restoration works is the way to make Rome more and more attractive and also to create new jobs. It’s key to immediately redo the Roman and Milan airports so that they are aesthetically and functionally in line with other big airports in the world, as well as to build infrastructure and streets. It’s too bad we have so many works of art stocked away; I would pull them all out so that those who come to Italy will be inebriated by Italian beauty, which nobody else has.

WWD: Do you have other  such projects in the pipeline?

D.D.V.: We will be busy with this, but we’ll see, we will surely continue on this road.