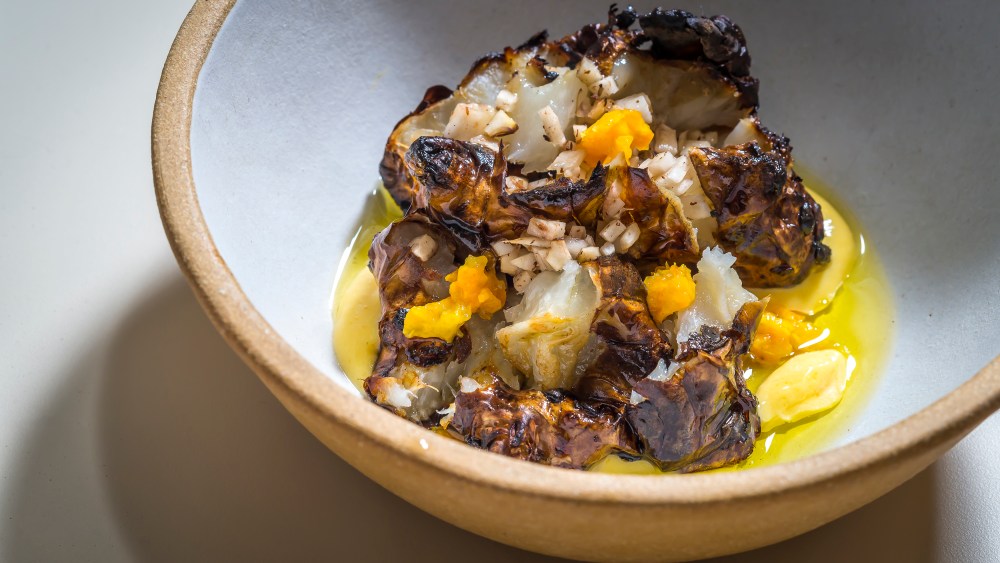 Diego Moya has had a busy year. He recently opened the doors to Hemlock in the Lower East Side, which follows the opening of Blake Lane in the Upper East Side last November. The former Casa Mono sous chef helped Suzanna Beall open her California-inspired eatery while working on his first solo restaurant; he’s still a partner at Blake Lane and goes up several times a week. While he has his hands full, it is also a convenient arrangement.

“It was kind of a two-part deal when I met these investors, they were interested mainly in doing a restaurant for Suzanna, who’s the owner up there, but at the same time I was in the process of trying to put this project together,” Moya explains. “The conversation was if I help them do that one, they would help me do this one.”

Hemlock is small and intimate — 38 seats — and Moya built the dining room from scratch with help from family; his cousins designed the custom woodwork framing the open kitchen. The space is lightened by mirrored ceilings and a wall of windows looking out to Rivington Street; casual tabletops juxtapose all of the wood detailing in the room. The cozy design elements allow the spotlight to remain on Moya’s dishes — and, more specifically, the vegetables.

“I’ve always had a fascination with vegetables,” says Moya, who worked in Paris under chef Alain Passard, owner of three-star restaurant L’Arpège. Passard notably stopped cooking meat in the early Aughts to focus on extending his same high-level approach solely to vegetables. “In my ideal world, I would not have any protein or any meat [on the menu],” Moya adds.

At Hemlock, the idea is to keep the focus of each dish on a particular vegetable. Moya describes his process as trying to figure out the best use of an ingredient at a particular moment, and alter the approach to reflect the changing of an ingredient day-to-day, season to season. “It’s almost like a study of each ingredient on each plate,” he adds.

“For the most part when you’re getting excited about an ingredient, you make a dish. But it’s different when you just try and make a delicious dish, as opposed to when you have that restriction where you’re not allowed to use too much,” Moya says. “You can’t just decide to use black truffle or something else, just because it’s going to make [the dish] delicious,” he continues. “Here we have to find that inherent deliciousness in that one [vegetable]. So we do it by juicing vegetables that aren’t juiced, or over-roasting vegetables, or blanching them perfectly then tossing them in their own juice.”

Among all of the vegetables seasonally available, how does he decide which to work with?

“Ingredients kind of scream out when they’re ready,” he says.